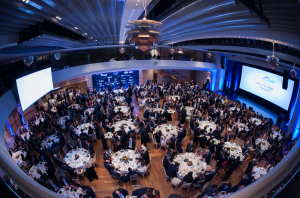 A view from the dinner

[March 22, 2018] MANY of the past greats of the Greek shipping industry were saluted at the Greek Shipping Hall of Fame Induction Ceremony & Dinner 2018, attended by about 630 guests included numerous leading personalities from today’s maritime community.

The gala dinner event concluded with the announcement of the Inductees for 2017 – Aleco N. Goulandris and Basil M. Mavroleon – who were remembered through interviews with family and warmly lauded for their contributions and achievements at the prestigious event held at the Megaron, the Athens Concert Hall.

Highlights of the event included the appearance of internationally-renowned classical crossover singing star Mario Frangoulis who presented a donation out of the proceeds of the event to Hellenic Hope, a charity that raises funds to support carefully-selected projects in Greece that help children in need, focusing on children at risk from the nation’s ongoing economic hardships.

Before presenting the cheque to Tina Mavraki, one of Hellenic Hope’s founders and trustees, Mario Frangoulis congratulated the shipping community for its generosity and emphasised the need for continuing support as hundreds of thousands of Greek kids currently live below the official poverty line. 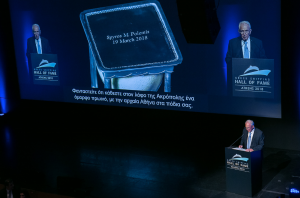 The keynote after-dinner speech was given by Spyros M. Polemis. Among numerous important positions held by Dr Polemis during his career, between 2006 and 2012 he was chairman of the International Chamber of Shipping, the first time a Greek had headed the world’s principal shipping industry organisation, representing more than 80% of all merchant shipping capacity. Dr Polemis gave a compelling speech, drawing parallels between modern Greek shipping and the maritime exploits of Athens about 2,500 years ago. “The Greeks, more than any other people in the world, have remained mariners without interruption throughout history,” he noted.

Impressive industry support for the event was led by ABS, IRI / The Marshall Islands Registry and Shanghai Waigaoqiao Shipbuilding Co. Ltd. the three Co-Lead Sponsors of the Induction Ceremony & Dinner 2018.

Vassilios Kroustallis, Senior Regional Vice President, ABS,  said: ” The people we are celebrating tonight exemplify leadership and embody the pioneering spirit that has defined the maritime industry for centuries. We are doing our best to live up to their legacy.”
According to Theo Xenakoudis, Director, Worldwide Business Operations  and Managing Director, Piraeus, Greece for International Registries Inc.,  “Greece is a maritime nation by more than just tradition, it is a maritime nation built on the passion and commitment of its people. With a legacy of seafaring that goes back thousands of years, Greece continues to be a driving force in the modern maritime industry.” 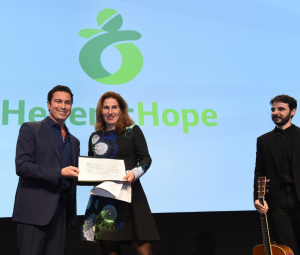 Wang Qi, Chairman of Shanghai Waigaoqiao Shipbuilding Co. Ltd., emphasised the strong ties between Greek shipowners and shipbuilding in China. “It has become a tradition for SWS to visit Greece to meet our Hellenic friends and join you in paying tribute to personalities who have made an outstanding contribution to Greek and global shipping,” he said.

TMS, which has become one of Greece’s largest shipping groups since it was established in 1986, sponsored the welcome drinks party for the event and TMS general manager George Kourelis welcomed guests on behalf of founder George Economou.

Navios Group of Companies was the event’s Dinner Sponsor and Navios Chairman and Chief Executive Angeliki Frangou addressed the audience to emphasise the importance of not losing the opportunity to invest in shipping during the down-cycle and also the importance of investing in human capital for Greek shipping.