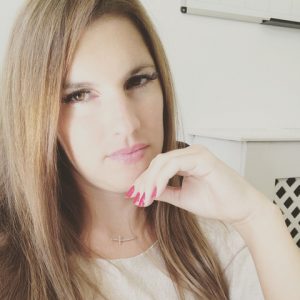 An unusual exhibition about Andy Warhol has popped up in a gallery in New Bond Street and it’s themed pink!

“Walking through a museum or an art gallery will teach us more than just art history or the work of contemporary artists. Let’s think of artists as different brand personalities and their art as the image of their brand personality,” says designer Janaina Baxevani who has helped bring the show to life.

The exhibition at Halcyon Gallery offers a rare glimpse into the early years of Warhol’s illustrations. It’s not about his familiar silkscreen prints of American icons, such as Marilyn Monroe or Campbell’s Soup cans. It’s about the whimsical illustrations that gained Warhol initial recognition and which began his transformation into the ‘Andy Warhol’ we know today. 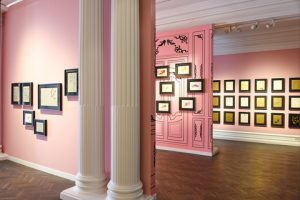 Intricate, illustrative pink walls introduce the theme of Warhol’s boudoir and the animated sketch-like plinths bring this to life. Janaina Baxevani has left her creative mark in this unusual showcase. She contributed towards the effective story-telling of Andy Warhol’s Early Illustrations by designing the visual identity of the show. Her illustrations help to bring Andy Warhol’s sketches to life. Janaina’s 360 degree approach to design is making an impact in the arts world, taking visual communication and exhibition design to another level. 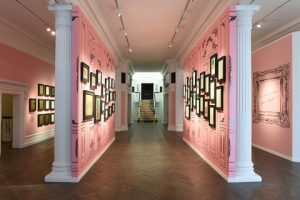 Janaina is a multidisciplinary, experiential graphic designer with an eye for innovation and aesthetic perfection. She holds an FdA in Fine Arts from Central Saint Martins, a BA (Hons) in Fashion Promotion: Public Relations from London College of Fashion, an MA in Graphic Branding from the University of the Arts London and an MPhil in Communication Design from the University of Westminster. She has worked for Christie’s, Sotheby’s, Vogue and Harper’s Bazaar to name a few, and although her skillset is vast, her greatest expertise revolves around the worlds of art and exhibition design.

Janaina designs with set purpose and such work attempts to tell stories and create meaningful experiences. She is currently working for Halcyon Gallery, producing identities for exhibitions, client fine art volumes and promoting contemporary artists such as Andy Warhol, Dale Chihuly, Lorenzo Quinn and Bob Dylan. Alongside her work for Halcyon Gallery, she works on her part-time research project, in which she investigates the ‘Storytelling of The Old Masters’ and explores means of communicating historical significance through graphic design practice. Through her research, Janaina aims to raise the potential of communication design practice as a contribution towards the history of art education and curatorial exhibition experience. 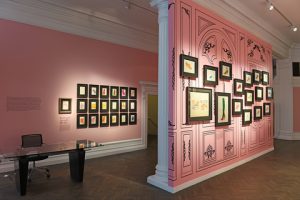 Early Illustrations by Andy Warhol runs until 27 May 2018 at the Halcyon Gallery, 144-146 New Bond Street, London.

*All pictures are courtesy of Halcyon Gallery

Low, unsustainable and volatile markets …and Peace lost the chance