“Greece out of crisis? Building a competitive economy” 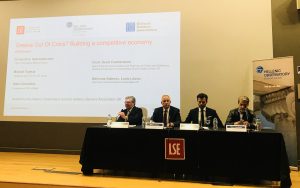 “Greece out of crisis? Building a competitive economy” – A Hellenic Bankers Association-UK & Hellenic Observatory of the London School of Economics panel discussion about the future of Greek Economy. Dr. Evelyn Stefanaki was there with her camera:

The Hellenic Bankers Association and The Hellenic Observatory, LSE, co-organized a thought-provoking panel discussion about the future of Greek Economy, in view of its conclusion of its third “bailout” this coming August. The Greek Ambassador, Mr. Dimitrios Karamitsos-Tziras, prominent Greek ex-pats, Greek professionals as well as international students of the LSE attended the stimulating meeting.

The chairman of the Hellenic Bankers Association-UK, Mr. Louis Loizou, set the scene by putting forward the question of why Greeks of working age, are the least interested in starting a new business venture in their country and the most in fear that any new venture may fail, in a recent survey conducted amongst people from different European countries. 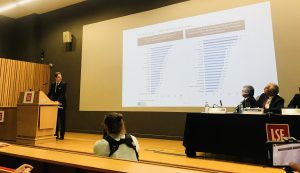 Professor Kevin Featherstone, Head of the European Institute, LSE and Eleftherios Venizelos Professor of Contemporary Greek Studies, LSE and chairman of the panel discussion, addressed the essential consideration of what would be the best way of establishing a sustainable growth model for the future of Greek economy in order to undergo a long-term transformative change. He then welcomed the expert businessmen and panel speakers of the evening, Dr Vassili G. Apostolopoulos, CEO, Athens Medical Group, Mr. Nikos Drandakis, Founder and CEO, Beat and Mr. Michael Tsamaz, Chairman and CEO, OTE.

Dr. Vassili Apostolopoulos gave the opening presentation of the evening. In his opinion, the cure of the economic crisis in Greece, rests mostly with changing the political system radically, by means of legislation and its full implementation. He highlighted that Greece, should avoid at any cost a return to the past and that the end of the adjustment programs does not mean that Greeks should relax but to uphold their fiscal prudence. To do this, Greeks have to stay away from problematic practices such as the clientelism state and political exploitation of the state as its apparatus by the political parties. Additionally, Greeks need to avoid the allocation of benefits and special provisions. Instead, they should be working on fine-tuning the best possible incentives for business so that there is development, creation of jobs and investments. Thirdly, Greece needs a political consensus on the very basic prerequisites needed for a sustainable and dynamic recovery. Namely, the lightening of the bureaucratic burden, the fueling of entrepreneurship, the simplification and streaming of legal framework, the smart tax reform with incentives for new investments, expansion of business as well as clear and stable rules of the game that are applied universally.

He then moved on in presenting what the private sector can do to help accelerate growth and ensure a smooth and sustainable recovery. The first step, is the exit from the memorandum. A new national reform plan of Greek ownership is urgently needed this time and embraced by the whole political system that will help maximize competitiveness, productivity, innovation and export of valued goods and services. All new reforms must be highly targeted to encourage investments, facilitate the opening of new business, reducing the risk, reducing social security and tax burden of firms. At the same time, there is a need to attract and repatriate the Greek talent living abroad as this is the epicenter of resynthesizing the country. He emphasized that the execution of the plan, must be entrusted with the private enterprise, entrepreneurial vision and managerial efficiency. To move forward, focus needs to be in Greece’s comparative advantages, make smart investments, diversify, advance greater inter-connectiveness between different productive sectors, maximize competitiveness, as well as export of final goods with high added value. Agrotourism and education are two characteristic examples of this, he emphasized. 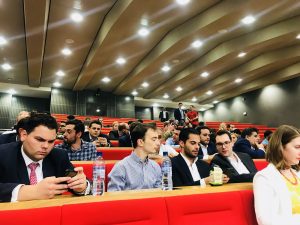 Sheikh Zayed Theatre, at the New Academic Building of the LSE, slowly filled by participants of the event.

In spite of the numerous challenges and irregularities that the Greek case continues to present, Dr. Apostolopoulos remained optimistic regarding the output of the Greek economy and the prospects of the country. He highlighted that there is a progress of several major investments, major in both size and symbolic significance. From Elliniko to Atalanti Hills, from TESLA and Samsung centers in Greece to the far-reaching infra-structure investments currently underway. With a total of 69 investments in the total budget of 21.4 billion the Greek outlook in the map is good again. Furthermore, according to recent data, exports are on the rise again marking approximately 30% increase in the last quarter, while there appears to be a rise in interest in real estate and tourism. So Greek economy continues to be in dire need of dynamic entrepreneurial activity, new ideas, new firms, new synergies, new investments and new global partnerships.

Dr. Apostolopoulos received a warm applause when he suggested the rebranding of the country and hence its smart repositioning on the global chessboard. He stated that how Greece is perceived politically, economically, socially is crucial for foreign investment, marketing and tourism, negotiating power as well as it is crucial for national security. We need to work collectively and methodically, he pointed out and to make a clear transition from the Greek crisis to the Hellenic growth, recovery and prosperity and reconceptualize a powerful, European state at this pivotal southeastern corner of the Mediterranean. He warmly suggested, then, to drop the name Greece and adopt the name Hellas. He reported that there is a good landmark ahead, the 2021, where we shall celebrate 200 years since the Greek Independence. He suggested that we need to work hard with sense of common purpose for all to make it happen.

Mr. Drandakis, focused mostly on immigrating Greek talent. He stated that the problem he is facing in dealing with his company Beat, is that there is not enough Greek talent left in Greece, to support an operation like his, in order to become competitive and to expand. If there is no human capital to support companies like Beat, then Greece will not be a part of the “4th Industrial Revolution”, he reported. If that is the case, attention will be turned in growing the economy on more traditional sectors, like agriculture and tourism or low value services which will make our economy a low level globally.

What can be done in facing these challenges, he asked. The number one priority is to repatriate the talent that has left the country in the last years and attract talent from other countries too. Competition with the other EU countries is hard but in the end, he stressed, it is well worth it as he believes that the capital follows talent. 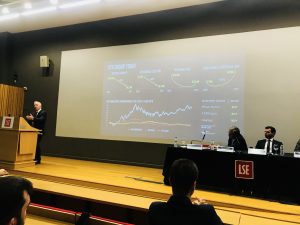 Finally, Mr Tsamaz  started his speech with expressing his belief about the crisis. There are two ways to face a crisis, he said, either by panicking, becoming introverted and hoping for the best or keeping calm, treatint crisis as an opportunity, coming up with a comprehensive and decisive strategic plan and getting to business.

He presented then the OTE business example and how the crisis was dealt with and transformed OTE to a modern technology powerhouse. Mr. Tsamaz became chairman and CEO of OTE in 2010 and at that time OTE was trapped in a vicious cycle, low competitiveness, poor financial results, poor customer experience, fierce competition and inherited debt, which due to the Greek crisis was at high risk. The debt was 4.3 billion Euros which although for an average time this is an efficient balance, for a crisis period when banks have closed the financing, this was an issue. Personnel costs were over 1 billion, twice as much as the efficient European average and loss of customers was at a rate of 10% of total customer base. Above all, OTE group was stopped from investing in order to protect the competitors who were not capable to invest.

How was that dealt with to transform the company, he proceeded in explaining. The situation was treated as an opportunity. The team came up with a very solid strategy and got to business. At that time, the team saw the various external and internal factors that were influencing the business and it was decided that they had to at least handle and manage the internal factors that could be influenced. At this point, Mr Tsamaz, stressed the fact that no matter how good the plans are, they cannot be successful if there are no right and capable people to work with. The strategy that was adopted consists of several pillars: technology superiority, best customer experience, leadership in business, operational cost optimization and a model human resources plan.

Everything was changed in three stages: firstly, the basis was fixed in order to secure the competitiveness of the company. The net debt was slashed by taking a bold decision, like the liquidation of assets. A new customer-centric philosophy was introduced and changed up all the customers facing process and systems. Prices were brought down by cutting costs and inspired the people to tackle a cultural change towards a performance-based organization. The second stage was the focus on growth. They invested heavily throughout the crisis on both fixed and mobile investments and the total investments exceeded 2 billion Euros during the crisis period. At the same time, they cut costs wherever possible in order to continue investing. They created new products as well as entered new market segments. Having done all this, they achieved to transform the company from a fast bleeding company in 2010 to a leader in broadband, ICT and TV sectors in 2018. What has been achieved with all this? Today OTE has achieved his sustainability. The 2017 results showed revenues of 4 billion, a net debt down from 4.4 billion to 700 million Euros, a resilient EBDA and reduced cost by more than 30%. This allowed them to invest in infrastructure and with committed plans to invest more than 4 billion in the next 4 years. Most importantly, the customers are choosing OTE services for the quality it offers. 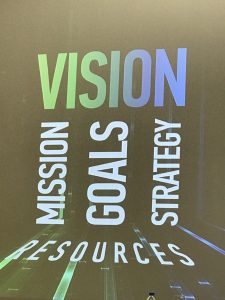 So far, the two stages have been covered. The third step, Mr Tsamaz highlighted, is very important and it is a new challenge. This stage has to do with digital transformation, so it’s a new journey that must be taken in order to adapt to the digital era. OTE has already compiled a virtual plan, it’s a 360 digital transformation program which focusses on the preparing the business for new technology and services and embarking on a digital transformation for all.

Greece has gone through very tough times, Mr Tsamaz concluded, however, he is optimistic about the future. The most important part for Greece now is a vision of itself translated to concrete, down-to- earth strategy, set the target, determine the objectives and follow the consecutive actions. Greece has to leave behind mindsets and proceed with reforms to make the country truly business-friendly. Technology can be an alliance for this, he underlined. To follow the “4th industrial revolution”, is crucial for Greeks. OTE group he committed as it has transformed the company in a technology powerhouse, it can help the country do the same.

Dry Market dives further with the BDI@1,109; the Wets on upturn