A story to remember 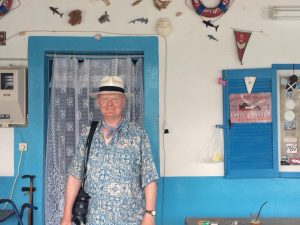 As an artist best known for colorful paintings of foreign landscapes, part of my work schedule is travelling somewhere new every year to sketch and take photographs for source material.

In the 1980s and 1990s my wife and I went to many different Greek islands. We decided to visit Astypalea in 1994 despite the long and fairly arduous journey from Scotland.

By the time the final ferry reached Astypalea there were only three couples from the UK left on board, and we are still in touch with each other. On one occasion we were in Livadi, wandering along the back roads. I can’t recall quite how it happened but we were invited in to a farm where the family was absolutely delightful. They plied us with fresh apricots, melon, all manner of sweet treats and coffee. Grandmother was lovely but the person who made the strongest impression on us was her little granddaughter who spoke English quite well and did all the translating. We had a really pleasant time, thanked them and left.

My friend Winston and I thought they were so nice and their hospitality so warm that we would return with some presents to show our appreciation. It may have been a couple of days later but back we went and were once again welcomed with open arms. Maria did the translating as before and, just as we were about to leave, tugged on my shirt and asked if she might write to me to improve her English. How could I refuse this request from such an earnest little girl? Maria was only about eight or nine at the time but already her intelligence and determination were clear to see, in her eyes and in her ability to communicate. 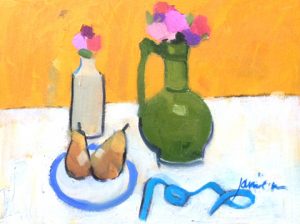 We exchanged addresses and our letters began and went back and forth All through the years I was aware that Maria wished to better herself. Indeed writing to me in English was part of that process. She wanted to learn and would go from challenge to challenge. I was aware that my letters would be translated for the whole family and made sure to wish Maria’s family well in each one.

I fully expected that in Maria’s teenage years the letters would stop, but her serious side, her desire to learn and her determination meant that our letters continued and so nearly twenty years passed. Along came the digital revolution and with it emails and Facebook. I watched with interest as my young friend’s working life became one in which she was making great strides and success came her way. 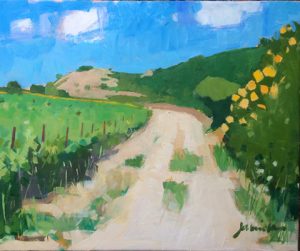 In 2014 Maria told me that she was buying a building in Astypalea to set up the Kallichoron Art Boutique Hotel. What, I thought, can I do to help celebrate this momentous event? I remembered I had done a painting of an older man on a donkey in Astypalea. The original transparency had been lost by a gallery but I made a card from a small digital file and sent it. A few days later Maria sent an email saying that her mother and grandmother were in tears because this was a painting of Maria’s late grandfather. What an extraordinary coincidence! Did I still have the original painting? Unfortunately no, but a framed print now hangs proudly in the reception area of Kallichoron Art Boutique Hotel.

This year my wife and I decided to visit Kallichoron Art Boutique Hotel, especially as Astypalea now has a small airport and travelling there is relatively easy. Imagine my surprise when Maria’s mother and father met us at the airport. One afternoon we were also invited back to the farm and met Grandma once again after twenty four years. 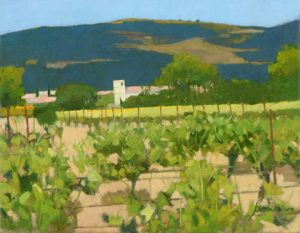 Who could have guessed that our friendship would one day make such a good story? I treasure my friendship with Maria, and now my wife and I are friends with her business partner Carolina as well. Long may our friendships continue and long may Maria go from success to success.

“One of the great things about travel is that you find out how many good, kind people there are. Let life surprise you and trust the journey.”

Charles Jamieson is a Scottish artist and painter and great lover of Greece. His paintings are very distinctive with his trade mark intelligent use of color, coupled light and shade and are diverse in subject matter. Charles He travels extensively and exhibits regularly in London and New York, while his paintings are in many private art collections across the world. He is a past Chairman of the Aspect Prize and also a past President of the Paisley Art Institute and has been the recipient of a number of art awards. He was nominated by The Herald as “one of 50 Scottish Artists to invest in”, and he is included in The Dictionary of Scottish Painters 1600 to the Present. 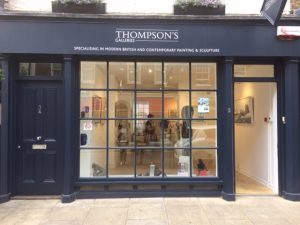 The BDI@1,404 before the coming Shakespearian Tempest