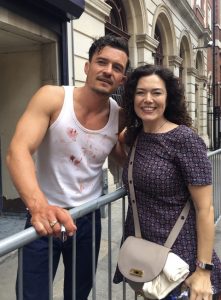 One of the most beautiful things you can do in London is to go to the theatre. It is estimated that in 2017 more than 15m people did so, bringing in revenue for the theatres of more than £700m !

Of course, most Greek and other foreign visitors choose to watch musicals that have been playing for decades. Those are really gigantic performances with amazing scenes, great productions, and an alternating cast.

If you feel confident about your English, I suggest you go to a play. Even in a smaller theatre. Almost all well-known English and American Hollywood actors love to play in theatres in London’s West End. The tickets for their performances usually sell out quickly. So buy yours before you come to London! Of course, you can even try the same day, passing by the theatre, to ask for returns since several tickets sometimes are offered at a better price. 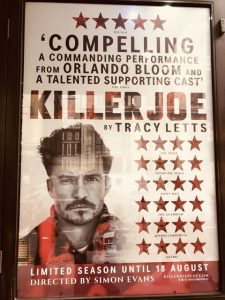 I recently went to Trafalgar Square, to Trafalgar Studios, to watch an excellent show. The play Killer Joe by the stage writer and actor Trace Letts, winner of Pulitzer and Tony awards. Directed by the talented Simon Evans.

A black comedy, action thriller, with violence and harsh dialogue, as we were told before we entered the theatre! Unsuitable for those under 15 years of age. You may have seen the 2011 eponymous movie starring Matthew McConaughey.

Principal actor is, the well-known British thespian, Orlando Bloom. Born in Canterbury in 1977 graduate of the Guildhall School of Music and Drama, he came to prominence as Legolas in the trilogy The Lord of the Rings and the Hobbit triology. He played Will Turner in Pirates of the Caribbean, but also Paris in Troy! While he has conquered many roles in the West End and Broadway in New York. 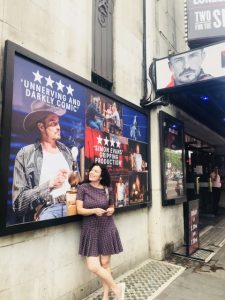 The co-stars Sophie Cookson, Adam Gillen, Neve Mcintosh, and Stefan Rhodri, are all outstanding actors. In Killer Joe, they depict a particularly difficult family life in America, living in a poor caravan park, with a very low standard of living, culture and education. The family’s plan is to pay a killer –  played by Orlando – to murder their mother and father’s ex-wife, in order to reap a life insurance pay-out and share the money – by making each as little as $ 6,250.

In harsh language, with impeccable American accents all of them, we witness scenes of violence and tension, several times shocking! And I do not mean a shock coming from seeing the naked Orlando’s back or the scenes where the co-stars appear naked. But shock from the violence and degeneration of human relations.

We so often watch films with much tougher scenes but we usually do not feel affected since we consider ourselves as distant observers. But director Simon Evans together with the set designer places us within the home in question, surrounded by the family so naturally we feel we ought to take a stand. React, defend!

A performance that pleased me and has earned five stars in reviews. I loved the sets created by the talented Grace Smart, and was impressed by Jonathan Holby, the director of the battle scene. I did not even know there was such a specialty, a combat direction

I could not resist at the end of the show going to meet the lead actor I had worshipped as Legolas in The Lord of the Rings.

I got an autograph and hugs and kisses since my friend, who joined me, let him know that it was my birthday!

Orlando was courteous, sweet, and he was anxious to know how we felt about the show.  He wanted to know if he shocked us enough as the actors were shocked. 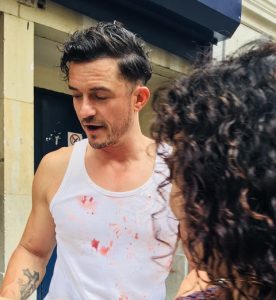 As you can see from my smiling face in the photos, I thoroughly enjoyed the show and I recommend you to see it for yourselves.

Disappointment and Joy for Championship Contenders as Qualifying Ends