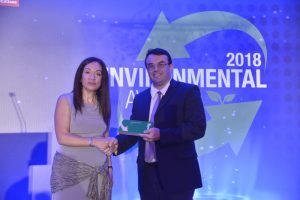 On Tuesday, July 10, 2018, the Hellenic Marine Environment Protection Association – HELMEPA received an Honorary Award by the institution Environmental Awards 2018, organized for the 5th consecutive year by Boussias Communications “for advancing environmental awareness at all levels of the shipping community since 1982 and for the voluntary environmental program HELMEPA Junior sunce 1993”.

The Award ceremony for best practices implemented in Greece for the protection of the environment and sustainability, took place at the Ariadne Estate in Varibobi, and was attended by more than 300 high-level representatives of both the private and public sectors.

Commemorative photograph with all the winners of the Environmental Awards 2018

The honorary award was presented to HELMEPA by the Judging Committee of the Environmental Awards 2018 separately from the normal application process, for the association’s sensitivity, work and offer to the environment in its areas of activity.

All those awarded deserve our congratulations for their efforts towards the protection of our country’s natural environment.