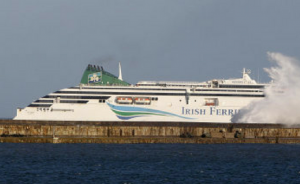 British and Irish seafaring unions have called for an urgent meeting with Irish Ferries to discuss concerns over the pay and conditions of the crew that will work on a new ‘super-ferry’ due to come into service in the autumn.

SIPTU, RMT and Nautilus trade unions have written to senior management at the company to seek assurances on the rates of pay for the crew of the Cyprus-registered W.B. Yeats, which is expected to enter service on the Dublin-Holyhead route in September.

The three unions have asked Irish Ferries to confirm that rates of pay for seafarers on the new vessel will be compliant with National Minimum Wage legislation in Ireland and the UK.

‘SIPTU, RMT and Nautilus are united in campaigning for more jobs and training for Irish-based and UK-based seafarers on passenger and freight ferry services in the Irish Sea,’ the letter states.

‘It is our shared position that employers in the Irish Sea who either directly employ or use agencies to crew vessels with seafarers on rates of pay below the respective National Minimum Wages (NMW) in Ireland (€9.55 per hour) and the UK (£7.83 per hour) are undermining employment law and preventing local seafarers from competing for work.

‘Such crewing practices also represent unfair competition for employers in the Irish Sea who do pay seafarers rates agreed through the collective bargaining process with recognised trade unions and who invest in seafarer (ratings and cadets) training programmes,’ the letter adds.
____

Examples of Seafarer pay rates below the Irish and UK NMWs on Irish Sea routes (Source: ITF Inspections and individual contracts of employment 2014-2017)

[1] Seafarers are all Ratings Grades. The lowest paid tend to be working as Stewards or On-Board Services.