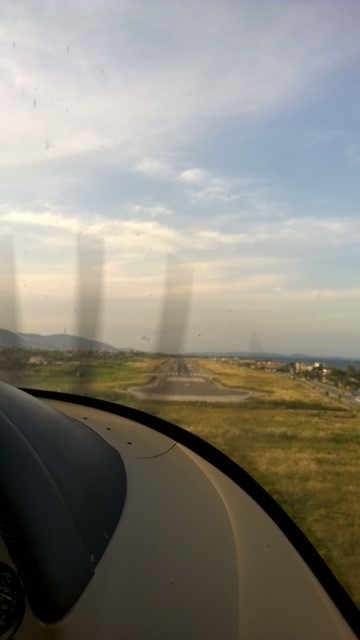 The other day, I was thinking about the so-called “reforms” that the Greek government is allegedly bound to accomplish. The majority of these promised reforms have either not matured or those that probably have, are surrounded by reservations, as to whether these are indeed performed in a way, that are to the interests of the country.

One interesting example is that of Fraport Greece. This joint German-Greek venture have acquired the 14 airports, having taken some substantial loans from a well-known Greek Bank, (ie Greek taxpayers money) and indeed they perform development works on the airport terminals and the infrastructure. The airport opening hours have been increased to nearly 24 hours and the number of commercial incoming flights to those “Fraport islands” has been substantially increased. On the other hand, when talking to private pilots, I hear, (and this is confirmed by The Hellenic Civil Aviation Authorities), that the number of arrivals of private light aircraft in those airports has been substantially decreased. In some cases, more than 85% of reduction of private and general aviation flights have been recorded.

Talking to both parties, Fraport and the European private pilots association of light aircraft, I understand that the company has effectively taken the stance to eliminate the general avation from its newly acquired airports. Of course, they do not say this openly but they simply imply it. The measures they have taken were simple: Landing and handling fees were increased by more than 10 times to all light aircraft within the last 2 years, and therefore, landing to a Greek Fraport airport becomes totally unaffordable unless you are a sheikh or a multimillionaire Microsoft officer, “driving” a Gulfstream, in which case, money do not matter anyway. Interestingly, one could argue that there are so many other problems in Greece that the elimination of general avation is not such a big deal anyway. However, on the other hand everybody would agree that the infamous “economical development” will not come from saturated sectors such as your typical touristic combination of hotel, beach, taverna, but through new, alternative experiences, the so-called alternative forms of tourism for example, Agro-tourism, religious tourism, yachting, etc… One of these alternative touristic activities is the aero-tourism, that is, flying with a light aircraft from one country to the other, and hoping from one island to another. This is a $22 billion industry, in Europe with around 300,000 general aviation private pilots and growing. Can Greece not have even a small part of this pie?

I cannot but be tempted to compare myself the landing and handling fees that Fraport charges in their recently owned Greek airports to those that accommodate general aviation in Europe. Anybody can do this through searching the respective websites of the airports charging fee tables. The comparison reveals some simple yet, ridiculous results. The 14 provincial Greek Fraport airports have become the most expensive in Europe, if not in the world, for the whatever services they offer.!!! Unofficial sources from Fraport say that this is simply the cost of this “product”, “product” meaning the landing/handling services for a light 2-4 seater light aircraft. Trying to justify this unjustifiable gross fee, they say that the actual usable area of these provincial airports is small and hence these charges have to be on the high side (ie the most expensive in the world!…). I say, this is all about money and profit. And if you ask me, this is OK; This business should earn money, and make a profit to survive.

However, there are some questions regarding some unknown factors, and the unknown factors are more than the system of equations to solve, as one Mathematician would say.

The first question is what about competition? Who is it, that competes with Fraport? Is there any other party? Not? Can Fraport simply define the cost of any airport service just as they like? Or are we witnessing an illegal exploitation of a Monopoly taking place within an EU country ?

Second question is whether the government, which ought to supervise Fraport, does the job. Does it or not? Why is there so much silence from the Hellenic Civil Aviation Authority on this gross phenomenon of this massive profiteering or elimination of a vital sector that all the other EU countries enjoy?

And a third question; what are the consequences of eliminating the general aviation of light aircraft from a country? Does it not affect Pilots education in Greece, if light aircraft cannot land but only in a couple of airports for training purposes? Will the few remaining trainee pilots in Greece leave the country in order to accomplish their pilot educational careers abroad, together with the other thousands of students (brain-drain), where more modern and more civilized systems allow them to do so? Also, does this effective prohibition to land a light aircraft not affect the actual safety of those very few private pilots, who wish to fly from Europe into Greece in this alternative manner? Will these pilots prefer to stay in the air until they reach a non-Fraport airport in order not to pay these massive fees ? Will fuel starvation or weather affect the risk of such flights?

In the end, does this not eliminate the opportunity of developing and growing the aero- tourism sector as an alternative form of tourism in Greece?

IMHO (In My Humble Opinion, as they acronym in fora), this is not Fraport’s fault. Fraport does whatever they believe it will make money out of it. It is the government’s fault due to the lack of any supervision to the subject company, allowing it to do whatever… even harming their own country. A total business anarchy we may say.

But this is expected when a left-wing, self-proclaimed communistic government attempts to perform reforms in a capitalistic environment; It all goes so horribly wrong. The government, entangled by their own ideology, is unable to defend such development efforts, and this, together with their lack of interest and the lack of Aviation culture in Greece, the government becomes something less than a pathetic observer until it is all too late.

It is doubtful whether the private pilots Association, which within Greece is very small, will be able to rescue the situation. Let’s see.

The real and impossible to beat issue with the Civil Aviation is that those lawmakers or supervisors or authorities in the meantime they supervise Fraport they have applied to Fraport for employment after they leave their public post so in reality they protect Fraport actions. In the approval documents of FRAPORT masterplans is included the obbligation of Fraport to have installations for General Aviation fuels AVGAS MOGAS and increase the parking positions for General Aviation aircrafts. Fraport did nothing , does nothing and nobody is caring and GA is slowly dying. So this kind of progress that privatisation brings better let it go…..

I am wondering what the stance of the opposition is, which initiated this “reform/investment”.

Would they give the rest of the airports to the “monopoly”?

I flew from Athens to Corfu this past summer on July 14th, 2018 and spend the day there. I was charged 278 euro landing/handling fees with Skyserv who works with Fraport. I also paid 370 euro for 31 gallons of aviation fuel.

In all my flying experience in the US, the most expensive I have ever been charged was 100 euro at New York LaGuardia Airport.

Greece also charges the most expensive I have ever seen for aviation fuel at roughly 11.80 euro per gallon. In my home airport at VERy busy Boca Raton, FL I get charged 4.10 euro per gallon.

When a simple flight to a Greek island costs you in excess of 1000 euro that is no longer worth it even for pilots that have the disposable income.

Wouldn’t it be a profitable bussines for someone to take a ZZZZ airport and compete with Fraport? I suppose there are more options in the mainland than in the islands where the stakes are higher.

The author is “spot on” with the description of the problem. It is amazing to find such aviation articles in Maritime related magazines. Very well done..

Well done! I am also wondering if the “mother German Fraport” are aware of this strategy or whether they would have approved it, given that Frankfurt international airport has lower fees than any provisional Greek Fraport airport…

I am a hobbyist Greek pilot and I wanted to go and land in a Fraport airport (Skiathos) before one month with my ultralight aircraft. I knew that I was going to pay about 250e in total. So when I spoke on the phone with the handler the answer was that Fraport may not allow me to land because there was no space in the apron for parking. Also the told me to send an email with all my infos about my aircraft and the trip so they will see what they can do. Guess what, they never answered the email and a friend that was flying over Skiathos the same dates, returning to his local airport in Athens, took a picture of the empty Skiathos airport. Not even one aircraft has parked in the apron.

Fraport Greece don’t want General Aviation and they do their best to eliminate it.