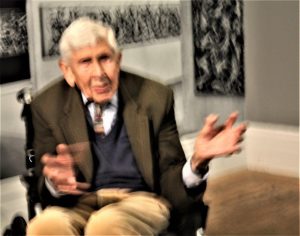 Trevor Dannatt is a modernist architect celebrated for involvement in projects ranging from the Royal Festival Hall, to repurposing the Royal Naval College buildings at Greenwich, to being commissioned to expand the British Embassy in Riyadh.

Added to this is what might be called an unusual achievement for an architect: to acclaim, he created the original London hang of the work of Jackson Pollock, one of the most controversial painters of the 20th century.

At the age of 98, he retains his sharp eye for design and has just returned – 60 years on – to the place where he oversaw the making of that important juncture in contemporary art history: Whitechapel Gallery at the edge of the City and the East End.

Mr Dannatt’s vivid memory as a near-centenarian is helping bring to a new audience what it must have been like to witness Jackson Pollock’s then avant-garde offerings. Iwona Blazwick director of the Whitechapel Gallery, said: “In 1958, the American artist revolutionised everything we know about painting, with a new phenomenon called abstract expressionism.” It involved pouring paint and other media directly onto canvases.

Media commentators in 1958 reacted to Pollock’s output with real or feigned shock. That year, the London newspaper The Star referred to it as “the chuck-it-on-technique called action paining.”

The monumental masterpiece Summertime 9A, the 5 m wide drip painting that caused much of the hoo-ha is the centrepiece of the new exhibition looking back at the UK premiere at the Whitechapel Gallery in 1958 of a show of 58 works by Pollock (1912-1956). Trevor Dannatt was invited by the Whitechapel’s then director Bryan Robertson (1925-2002), to design a new environment for the paintings from 1947 and 1950, known as the ‘drip period’ of Pollock.

Mr Dannatt produced what was at the time a radical layout for an exhibition, founding what was to be the gallery vogue for the “white cube” – a square or oblong of white walls, with light flooding in from above. This was attuned to the trend to abstraction in contemporary art. White walls minimised distraction and acted as a frame for the exhibits. In Mr Dannatt’s professional practice of architecture, parallel concepts were evolving in the 1950s. 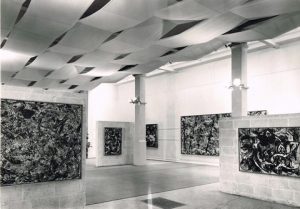 Whitechapel Gallery says in its statement that Mr Dannatt’s constructivist approach to the display transformed the salon-style gallery into a theatrical environment. “His ‘cohesive architectural ensemble’ included freestanding breezeblock walls, black panels, and an undulating ceiling of suspended fabric. This audacious layout enabled a dynamic encounter with the paintings from numerous angles, immersing visitors in a powerful encounter with painting as environment.”

Now using a wheelchair, the architect graced the press launch of the new show, and in a publicly-available audio interview added further perspective on the seminal moment exhibition-making history and Pollock’s legacy.

Mr Dannatt told the press gathering that the layout “seemed to come together almost automatically; we needed more wall space. I was aware that modern art was basically constructivist art.”

The interview for Staging Jackson Pollock describes Mr Dannatt’s architectural approach to creating the display and how he travelled with Mr Robertson to Berlin which was a stage in the exhibition’s tour of Europe from New York’s Museum of Modern Art. It followed Pollock’s untimely death – while presumed to be under the influence of alcohol, he crashed his car into a tree in New York.

Mr Dannatt recalled that MoMA’s International Programme was rumoured to be sponsored by the CIA as part of its soft power armoury in the Cold War. Abstract Expressionism was used to symbolise freedom of expression, countering the statist grip of the Soviet Union.

Of the eventual 1958 London exhibition, Mr Dannatt declared: “It was probably the best Jackson Pollock show put on. I never thought it would become art history.” He said of the character of Pollock: “He was a lovely man.”

Trevor Dannatt was among those who developed the Royal Festival Hall, the first significant public building in Britain to be designed in a modernist idiom, and designed many schools and universities. He oversaw the transformation of the historic buildings of the Royal Naval College at Greenwich into accommodation for Greenwich University.

Included in the new Whitechapel display is a selection of typewritten correspondence from the 1958 preparations and other contemporary material.

Nayia Yiakoumaki, curator of the Whitechapel archive gallery and head of curatorial studies, was joined in organising the exhibition by assistant curator Candy Stobbs. Ms Yiakoumaki said: “As a curator who works with archives, I am keen that archives are not remnants hidden away.”

Staging Jackson Pollock is at the Whitechapel Gallery, London, until March 24, 2019. Free entry.