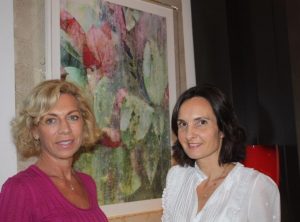 In a combined evocation of déjà vu and premier vu, creative photographer Caroline Gavazzi has opened a solo exhibition in London which extends an appreciative nod to the genesis 179 years ago of photography as we know it today.

Caroline imbues the images she takes with a sense of mystery by layering – one of her favourite words – elements into a series of abstract, impressionist compositions which explore the world of tropical plants living behind glass. 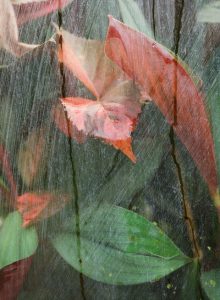 From the Tropical Sighs series.

Her exhibition, adding intriguing style to the interiors of Kensington’s elegant Hotel Baglioni, is entitled Tropical Sighs, and is presented by Carola Syz Projects.

The title is a reference to the first rudimentary botanical images depicted in ‘photogenic drawing’ which went on display in London in 1839. They were the work of William Henry Fox Talbot (1800-1877) an MP and scientist who reported that year to the Royal Society on his years of experimenting with photographic processes.

He introduced the basics of prints on light-sensitive paper, a radical break from earlier ‘photograms’ – silhouettes of leaves among them – that would fade rapidly.  That first stage of a new era perhaps inevitably kept the viewer at arm’s length from the insipidly-reproduced subject matter. 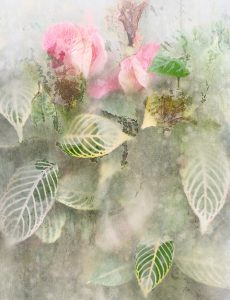 Another of Caroline’s sensitive compositions.

Fox Talbot’s photographs notably included a leaf covered by glass (an image that appeared in The Pencil of Nature, the first book in the new art) and Caroline Gavazzi appropriates such subject matter to breathe into it the vitality and vulnerability of colour, steam and evaporation. Caroline’s aesthetic fashions what looks like ethereally floating foliage. The studies, each a kind of individual ‘sigh,’ establish her mastery of her craft, to the point that she redefines the photographic focus.

She embraces a vision that is the contradiction of plants thriving in a greenhouse that nourishes and at the same time imprisons them. Through the lens of the perceptive photographer, they assume marvellous Impressionist and Surrealist qualities. As the plants seek a light source, so in this instance they seem to beckon the camera. 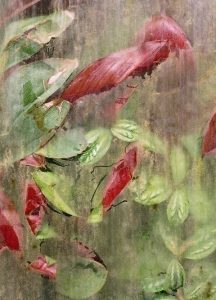 This thrilling force of nature spurs Caroline to explore the elaborate depth behind each surface guise. The whole series becomes an artistic transfer from Fox Talbot’s pioneering days to the articulation of meaningful and rhythmic concepts.

In a magazine interview earlier in 2018, Caroline recalled how at the age of 13 taking on a trip to Kenya a camera she was given as a birthday present opened up the freedom to express herself artistically as she experienced parts of the African country where nothing was man made and everything seemed pure. She has been taking that teenage epiphany an exhilarating step further with every project she undertakes.

Although after studying photography at Spéos Photographic Institute in Paris and at the London College of Communication she embarked on a career shooting interiors and lifestyles for magazines, she later turned to creative artwork. She says that true inspiration must begin within the artist, not from commercial demands and deadlines.

Caroline and Carola during the private view.

Her theme of layered work is carried into another recent project that can be seen on her website, www.carolinegavazzi.com This is called We are Hereand shows fingerprints superimposed on her portraits of immigrants.

In 1999 a boat full of Kurdish refugees on their way to Greece to seek a new life was stranded on the coast of Reggio Calabria near the village of Riace, once part of Magna Grecia. The mayor of Riace invited the 200 desperate people to stay and settle in his community, where the population had been shrinking. 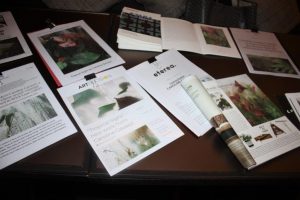 Caroline witnessed their arrival and was moved by their effective affirmation of their right to life, by their hopes and their stories. After taking their portraits, she placed a blow-up on a Plexiglas sheet of a fingerprint in front of every image, a symbol of the profiling the immigrants must face.

It was a time when there was tolerance in depressed parts of Italy for incomers to replace young people who had left for northern cities, since when a new government in Rome has acted in a draconian way to deter immigration.

We are Here has been shown at Pavia town hall and at the Photolux festival in Lucca.

Caroline has in the past year been awarded two prestigious prizes, at the Mia Photo Fair in Milan and the Fix Photo Festival in London.

Tropical Sighs, an exhibition of photographs by Caroline Gavazzi, is at 60 Hyde Park Gate, London SW7 until November 27, 2018.

When does a fixture become binding?

The engine has been started – Frankfurt’s autumn...

Prepare for the future of travel at WTM...