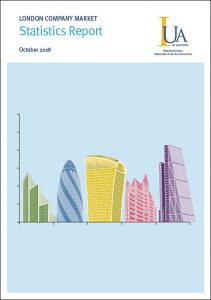 Premium income in the London company market has jumped to £26.314bn, a new report by the International Underwriting Association (IUA) has revealed. Gross written premium in London for 2017 was £18.331bn while a further £7.984bn was identified as written in other locations, but overseen and managed by London operations.

The figures represent an increase of 16% (£3.589bn) since last year’s edition of the IUA’s London Company Market Statistics Report, when the overall intellectual and economic premium total for 2016 was reported as £22.725bn. There have been significant increases in both premium written in London (£2.297bn or 14.3%) and controlled business written elsewhere (£1.293bn or 19.3%).

Dave Matcham, chief executive of the IUA, commented: “The growth in overall premium income is the most striking feature of this year’s London Company Market Statistics Report. It is a trend that has also been observed in the Lloyd’s market and is driven by a number of different factors.

“We have received multiple reports of companies embarking on new lines of business and growing premium volumes in specific classes as part of dedicated business plans. There are also instances of books of business being moved to the UK from other companies within a wider multinational group and of new insurance products being developed and offered to clients.

“In addition, our survey, now in its eighth year of publication, continues to improve its data collection operation in order to produce the most comprehensive analysis possible. This factor, in itself, may account for around one third of the overall increase in premium.”

The London Company Market Statistics Report 2018 also contains a Brexit analysis. This includes both a summary of locations chosen by insurers for new platforms to write continental European business after the UK leaves the EU and details of premium currently written in London by branch operations.

Elsewhere the report shows a total £3.138bn was underwritten by delegated authorities and a business split between direct/facultative and treaty placements of 77% to 23%.

A breakdown of income by class of business reveals property is the most significant sector, accounting for just over a quarter of all income, followed by liability and marine at 17% and 15% respectively.

Of total liability premiums, public liability is the largest category of business, generating income of £2.121bn in 2017. The report also details figures for employer’s liability, environmental liability and cyber liability.

Copies of the London Company Market Statistics Report 2018 are freely available to download from www.iua.co.uk/statisticsreport.