Bermuda showcased in Miami as centre of excellence 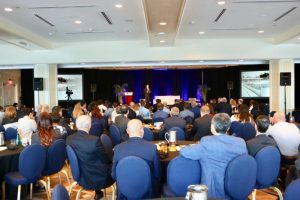 Hamilton, Bermuda, October 18, 2018 – Bermuda’s breadth of multi-industry expertise and opportunities the island offers the Latin American region were the focus of a full-day forum in downtown Miami yesterday organised by the Bermuda Business Development Agency (BDA).

Some 200 attendees attended the event, featuring more than a dozen thought-leadership discussions ranging from reinsurance, trusts and high-net-worth services to new blockchain start-ups. Participants included more than 50 industry, regulatory and government experts from both Bermuda and Florida, whose two communities and markets are closely aligned through geographical proximity, tourism, and a range of business interests, as well as the shared coastal challenges of hurricanes and sea-level rise. 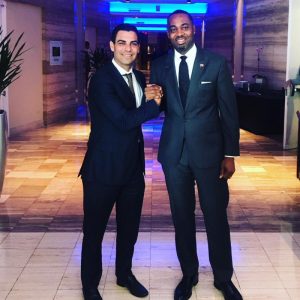 “In our core re/insurance industry, seeking out new markets overseas and promoting what Bermuda has to offer has always been a key strategy, but this event showcases the full suite of our financial services sector that can benefit US and LatAm clients,” said Shelby Weldon, a BDA Director. “It’s an opportunity to further develop those markets across our jurisdiction’s broad spectrum of industries and differentiate Bermuda as a centre of excellence.”

The event at the city’s downtown InterContinental hotel kicked off with a “seaside chat” between Premier David Burt and Miami Mayor Francis Suarez, a continuation of a discussion they began during a meeting at Miami City Hall last December. Both leaders acknowledged strong economic synergies between Bermuda and Miami and pledged to work closely together on a variety of issues, from resiliency efforts against ocean risks to fintech.

“It’s always a pleasure to sit down with Mayor Suarez: he’s dynamic and has had a very impressive first year in office,” noted the Premier. “We look forward to what the relationship can build for us both. There’s a lot of knowledge we can take from Miami and its economic experiences, and I’d really like to welcome the Mayor to Bermuda for a visit sometime.” 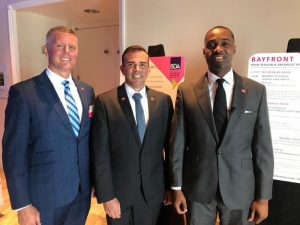 Mayor Suarez praised the Premier for his “innovative and forward-thinking” approach. “It’s comforting to know our city and his country are going to continue to grow in terms of their ties, and share knowledge with each other, and that’s a product of the leadership in both regions.”

Bermuda’s role via billions of dollars in reinsurance claims paid to stricken communities after natural disasters was recognised by industry and government representatives alike throughout the day, particularly poignant in the aftermath of Hurricane Michael’s devastation of Florida’s panhandle just a week ago.

“It’s important that Bermuda and Florida work together on resiliency issues, because we’re basically in the same boat: we’re sharing the same ocean and we have so much to learn from one another,” said Kristen Jacobs, a member of Florida’s House of Representatives who participated on a panel discussion of climate-risk mitigation. 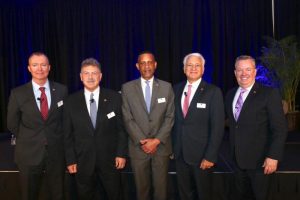 “Our ability to be strong is never just about us, it’s about how we work together as neighbours to be able to make change,” she added. “The relationship between Florida and Bermuda is more critical than many people realise. Helping elected officials and policymakers here understand reinsurance, the markets, and how pricing works, is going to be very important. This whole effort has begun a conversation that can continue.”

“Our roots are Latin American, our US headquarters is based in Miami, so it’s a perfect fit for us to put our support behind the BDA here,” said Mello, who urged the audience to consider Bermuda as a jurisdictional choice. “Bermuda is a great place to run a global business from. It has accessibility to the rest of the world and is a great domicile to do business in.”

Bacardi and the Bermuda Tourism Authority (BTA) partnered with the BDA on a networking reception concluding the event.

“Increasingly the BTA and the BDA are finding synergies of what they want to get accomplished,” said Glenn Jones, the BTA’s Director of Strategy and Corporate Communications. “At this forum, we’ve been talking to a high-net-worth audience and that is certainly an audience we want to reach, as well, on the visitor level. It also makes sense as far as superyacht and hotel developments. We’ll be doing that a lot more of that moving forward.”

Next month, the BDA holds another Bermuda Executive Forum in London on November 27. To register, click here: http://bda.bm/bermuda-executive-forum-london/