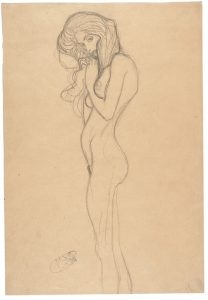 Klimt, Study for The Three Gorgons.

Even in sketched outline they are seductive: three turn-of-the-century drawings of the Gorgons, who in versions of the Greek myth are the beautiful but dangerous daughters of the sea god Phorcys. They were drawn in black chalk on packing paper in 1901 by Gustav Klimt as he worked on the Beethoven Frieze which was central to the 14th Vienna Secessionist exhibition in celebration of the great composer.

Their usual home is the Albertina Museum in the Austrian capital, but for a short time they are to be seen in London among an outstanding selection of works that heralded the new face of modernism in the early 1900s. 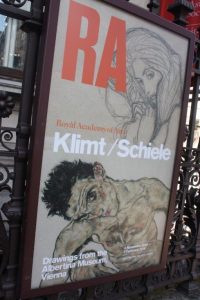 On the walls of Klimt/Schiele: Drawings from the Albertina Museum, Vienna at the Royal Academy of Arts are to be learned intimate details of the development of what one of the curators, Sarah Lea of the RA, calls two of the greatest draughtsmen of the 20th century. 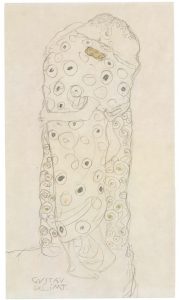 While the attractions of The Kiss are obvious, the artistry of the more basic drawings of Klimt and his follower Schiele have a drama of their own. In what is said to be the first exhibition in the UK to focus on the fundamental importance of drawing for both protagonists, a deep artistic relationship between the two is beyond doubt. The lives of both men were cut short by the massive flu epidemic of 1918.

Klimt, like many a great artist before and since, was at least initially influenced by the opportunity to develop his style from ancient Greek art. Although he broke away from classical styles and themes to align himself with the Viennese avant-garde, his interest in Greek imagery lingered to be expressed in such endeavours as the Beethoven frieze. As in the earlier Ancient Greece II (Girl from Tanagra) of 1890–91, his personages are more of a workaday than a myth-clad character.

Study for ‘The Dancer’ (Ria Munk II). By Klimt.

The Beethoven Frieze (on permanent display in the Vienna Secession Building) registered a big change in Klimt’s drawing. Its concept followed Richard Wagner’s interpretation of the ninth symphony in which mankind struggles to overcome evil forces — disease, madness, death, lust and wantonness – which are represented by monsters, among them the giant Typhoeus and the Gorgons, sensuous nudes drawn here with strong contour and without shading. The frieze culminates in the discovery of ideal contentment through the arts and represented in the close embrace of This Kiss to the Entire World, mirroring Schiller’s Ode to Joy which climaxes the symphony.

There was an earlier encounter with the theme of music: in 1895, Gustav Klimt and a colleague, Franz Matsch, were commissioned by Greek businessman Nikolaus Dumba to decorate two rooms in his Palais Dumba in Vienna, bringing forth the oil painting Musik. Klimt was soon earning well from painting the interiors of Historicist buildings on Vienna’s Ringstrasse. 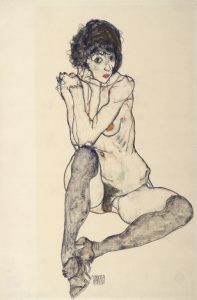 He had in 1897 become founding president of the Wiener Sezession (Vienna Secession) the radical group set up to stage exhibitions for experimental young artists. It broke away from the state-sponsored Academy to exhibit under the motto “To the age its art, to art its freedom.” Its symbol was Pallas Athena, the goddess of wisdom. Klimt had already used gold leaf in his 1898 painting Pallas Athene. He broke from the group in 1908, the year of The Kiss, to establish the Klimt-Gruppe, which organised its first exhibition in 1908.

He had been a pillar of the arts establishment, and his break from his earlier refined academic style divided his audience. Some of the wealthy sought him out to have their portraits painted, while others professed shock at his canvases of voluptuous nudes and unchaste bodies. 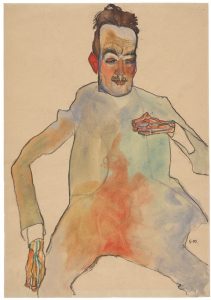 He had already caused a stir, with, inter alia, the University of Vienna Ceiling Paintings, presented in March 1901 at the 10th Secession exhibition. As Sarah Lea puts it, this showed the turmoil of human existence, exemplified in the painting Medicine, considered scandalous at the time because of Klimt’s spurning typical classical figures, in favour of real people with flaws and ageing. “He is deeply interested in the life-cycle,” said the curator. Medicine shows is a column of nude figures representing the river of life, and Hygeia, the daughter of the god of good health with the Aesculapian snake around her arm.

Klimt’s junior by 28 years, Schiele was a prodigious talent.  In his short life he produced more than 2,900 works on paper and 70 paintings. More than half of the works in one room of the RA show were made in 1910. 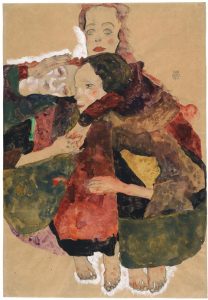 Group of three Girls. By Schiele

He was a master of the art of omission.  In a 1910 composition in black chalk and watercolour on packing paper entitled The Cellist the instrument is invisible, but the expressive use of colour suggests the music we cannot hear.

Many of Schiele’s portraits reflect the vulnerability of the sitter. In his study of a young prostitute (at the time the age of consent in Vienna was 14, although we do not know the age of this model) he audaciously suggests the mixture of burgeoning sexuality and adolescence. While some might see this drawing as pornographic, it induces the viewer to ask questions about their attitude to what they see.

Schiele left school early and with the encouragement of art teachers enrolled in the Academy of Fine Arts, at the age of 16 in 1906, soon falling under the spell of Klimt and then taking in his oeuvre more interest in graphic design, with a flattening of composition, especially from 1910. The first known encounter between the two was in November 1910 and there were further visits to each other’s studios as the inspiration became mutual. 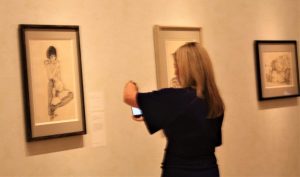 He had a close relationship with his life models, including his wife, sister and lovers, but his shameless figure drawing was hated by the authorities. The police confiscated hundreds of his works and in 1912, he was arrested on a false accusation of seducing and kidnapping a young girl he and his mistress had looked after.

The charges against him were downgraded to public immorality for having exposed a young person to so-called obscene drawings, but the artist spent a total of 24 days in custody. It was a time of anxiety because he could have spent 20 years in prison for a crime he did not commit. We see in this exhibition five of the watercolours he did while in prison. They show simply the cell corridor, chairs, handkerchiefs. 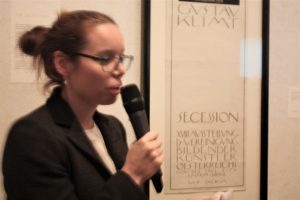 Sarah Lea of the Royal Academy

By the time of Klimt’s death after a stroke and pneumonia caused by the flu virus, Schiele was acknowledged as his successor, but he had only a few months to enjoy the fruits of success. He curated the Secession’s 49th exhibition but died three days after the deadly flu claimed his wife Edith and their unborn child. His portrait of a bouffant red-haired, Edith is especially touching.

The Albertina Museum rarely loans the works seen here and because of their sensitivity to light, they are unlikely to be displayed in public again for many years.

The drawings are supplemented by a sketchbook, lithographs, photographs and contemporary publications. The exhibition is curated by Désirée de Chair and Sarah Lea of the Royal Academy in collaboration with Christof Metzger and Eva Michel of the Albertina. 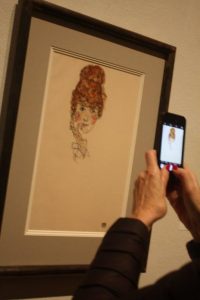 Klimt/Schiele: Drawings from the Albertina Museum is open at the Royal Academy from November 4, 2018 to February 3, 2019, from 10am- 6pm daily. Late night opening: Fridays until 10pm.