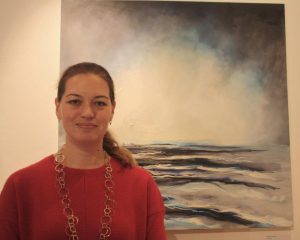 This was an exhibition entitled Reflections – and it reflected the enormous variety and painstaking quality of work coming from emerging UK artists.

The Hornshaw Gallery, which mainly markets its wares online, presented a selection from its substantial portfolio when it was hosted for a five-day exhibition in mid-November 2018 by the long-established A&D Gallery in Chiltern Street, Marylebone. 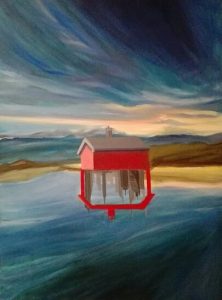 The Red House. By Alexis Antoniadis.

Much of the work is gentle and thoughtful, as opposed to the startling and provocative canvases that sometimes stem from the turbulent current scene. Reflective, one might say.

Sarah Hornshaw, founder of her namesake gallery, specialises in contemporary art from artists who are making a name for themselves, and students and graduates from prestigious art institutions.

The Hornshaw Gallery’s launch exhibition was in April 2016, at The Brick Lane Gallery, and exhibited at the A&D Gallery for the first time in September 2017.

Sarah has spent her career working for galleries, museums and auction houses; dealing with a variety of clients and contemporary artists engaged in commissions. Her aim is to promote the talented artists emerging from art colleges and make their innovative work accessible to anyone with an interest in buying art. 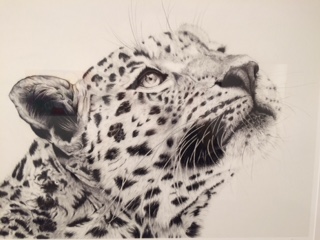 For the spectator, experiencing this range of work is an agreeable way of adapting to new terrain, entering the mindset of a range of creators.

One of the latest group of artists, Alexis Antoniadis, has already had success in London, Germany, Sweden and Greece. Alexis has radical but satisfying perceptions often involving deep reflections in the sea or other stretches of water: such is The Red House, one of his oil paintings on canvas, which demonstrates too his command of colouration.

He says in his statement that his work is about relations between the old and the new. “My inspiration is the contemporary world and the speed at which it is changing: market forces eroding traditions. I portray fictional cities; contrasting old traditional structures with modern skyscrapers.

“I try to convey rapid change that the world is undergoing and hint at the effect these can have on traditional values. I use some surreal elements to show the ironies of contemporary life.”

His most recent appearances have been at Doiranis Museum, Kilkis in central Macedonia, Greece, and the International Drawing Exhibition at Galerie Nord, Berlin. Earlier he had a presence at Litspiration in London in 2015, the Macedonian Museum of Modern Art, Thessaloniki, in 2014, and the Museum of Lithography at Sundby Gård near Stockholm, in 2012.

Violet Astor has travelled “the wild corners of the globe” to collaborate through her work with conservation projects to raise awareness and funding. One of her latest pieces is Jawai Leopard, the proud head of the animal shown in a limited-edition print. The species is seen in the hills of Rajasthan: the big cats have thrived thanks to the efforts of the local community, but there are worries that excessive tourism will drive progress into reverse.

Violet says that she is a self-taught artist having discovered drawing during the years she was chronically ill with Lyme disease. Drawing became “a therapeutic medium for healing.” 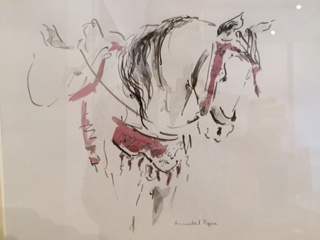 Her animal drawings have won acclaim in the UK and US; she was named David Shepherd Wildlife Artist of the Year at a 2018 presentation in The Mall Galleries, London.

Dan Bennett says that he spends weeks at a time “living in the landscapes I paint. Hiking the trails, climbing the rocks, swimming in the rivers, gazing at the stars and sleeping amongst the trees. I navigate woodland by moonlight, glimpse wild animals, befriend fellow travellers and explore the shapes, colours and textures of the natural world.”

This has given rise among others to his acrylic on canvas Snowdon which is a delight of rainbow colour.

“Partly factual documentation of the places visited and partly dreamscapes, my paintings blur the physical spaces and the intangible spaces of memory and identity,” he explains. 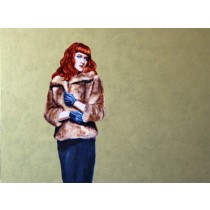 The Meeting. By Victoria Heald.

Dan graduated from Leeds University in 1998 with a BA in Fine Art, and in 2005 joined Studio 106 in Hove, Sussex. He has participated in many exhibitions in London, Brighton, Hove and Cambridge.

He has had seven solo exhibitions, including in 2014 at the Prema Arts Centre at Uley, Gloucestershire.

A leading wildlife artist who uses a variety of mediums, Annabel Pope offered in the latest show one of her pen and wash studies, Decorative Horse. In just a few lines indicating the forebody, she evinces her sympathy for equine tenacity and staying power.

Now based in London, Annabel Pope grew up on a farm in Norfolk, exploring the outdoors and wildlife. Another huge influence was her first visit to Africa as a child; she continued to travel and spend time in the continent throughout her formal education. 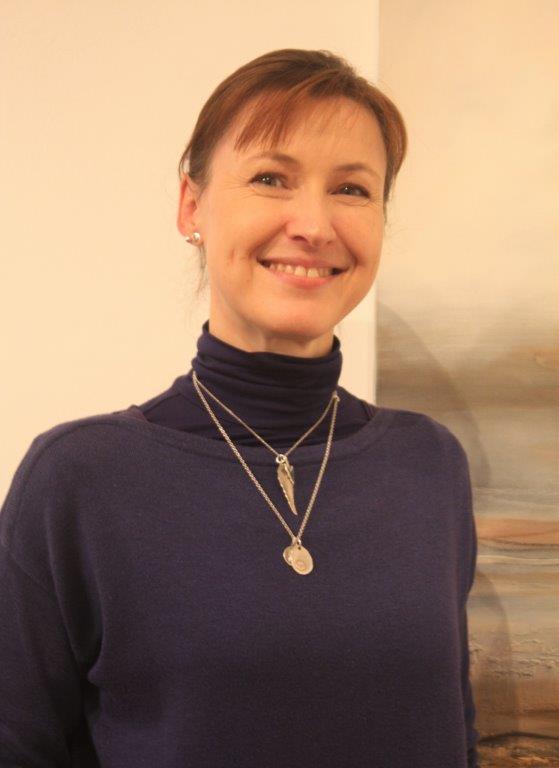 Her great passion for travel allows her to witness wildlife in its natural environment.  Over the years her work has documented visits to North and South America, India and the Far East.

She says that her need to explore the close chemistry and behavioural characteristics of each species results in a style which relates best to the living soul of the individual animals.

Annabel has supported charities including Countryside Foundation for Education, the Countryside Alliance, Zambian Conservation and Lewa Wildlife Conservancy of Kenya.  One her paintings was sold by silent auction for the benefit of Tusk Trust and reproduced in Sir Tim Ackroyd’s book Ark Two.

Recent years have seen her in Kenya, Mongolia, Ladakh, India and Morocco; with work on display in London, New York China and Hong Kong.

Victoria Heald, with an enigmatic oil and acrylic on board, The Meeting, invites the viewer to concoct a narrative about this red-headed, blue-eyed, blue gloved beauty.

Victoria regularly exhibits in London and was shortlisted for the Jackson’s Art Prize and the ArtRooms Prize. She says: “My work aims to communicate the intensity of the painted figure through pose, gesture and expression. I create contemporary figurative paintings by mixing traditional oil techniques with modern mediums, working on canvas, board or metal. The juxtaposition of changing surfaces, materials and compositions act to heighten the figurative image in each piece.”

Her recent works embellished with gold leaf reference the importance gold has played as a medium in the history of painting “and creates a contemplative space for the figure in each piece. The grandeur of the gold creates a contrast with the figures’ contemporary look, everyday clothes and gestures.”

Meanwhile, Victoria says that painting animals creates an opportunity to experiment further with textures, patterns and the tactile quality of paint.

As well as painting, she makes pen and ink drawings of buildings in London. Victoria, who graduated with first class honours from Camberwell College of Art and Chelsea College of Art, says: “Having lived in London for nearly 10 years, I’m always inspired by the beautiful variety of architecture in the city.”

The Hornshaw Gallery exhibition added to the eclectic mix of events showing contemporary and pop art, staged by A&D Gallery (51 Chiltern Street, London W1) under the direction of Helen Clarkson.