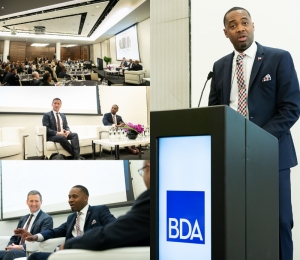 Close to 200 industry professionals from a range of business sectors, from shipping to insurtech, attended the Bermuda Executive Forum held at ME London by the Bermuda Business Development Agency (BDA). The event, the agency’s fourth overseas forum and second in London over the past year, brought together more than 50 senior industry and regulatory leaders as speakers and panellists to showcase the island as a financial centre of excellence. Presentations and discussions turned the spotlight on investment and business opportunities, and also underscored commonalities shared by the Bermuda and London markets.
“London is a very important market, and we want more people to know how we’re innovating and how we’re leading the charge,” said Premier David Burt who officially opened the forum. “Bermuda is different. We represent a place where you can develop products and services and sell them to the world from a well-regulated environment. We want to make sure that message is consistently heard.”
The UK’s Chris Holmes, Lord of Richmond MBE, joined the Premier for a 40-minute “fireside chat” on fintech to kick off the event, moderated by BDA Director Jessel Mendes. Holmes is a former Paralympic swimmer and nine-time Games gold-medal winner who has championed digital opportunities and the public benefits of blockchain and assistive technology since entering the House in 2013.
“London and Bermuda have had an extraordinary relationship over centuries, rooted in areas of the economy such as insurance, which continues to be such a close and fruitful bond for both parties,” noted Holmes. “When you look at all the opportunities fintech presents, it fits so well into that connection we have as two innovative jurisdictions, where we can collaborate, and where there can be niche areas for both entities. Working together, London and Bermuda can be key players in forging the potential future the Fourth Industrial Revolution offers.”
Throughout the day, industry professionals discussed the mature foundation and advantages Bermuda affords both established companies and startups, as well as its regulatory leadership and innovative culture that pioneered a legislative framework around fintech this year.
“Today’s forum was even bigger and better than our first one last year, an indication of the interest folks in London have about Bermuda,” said Mendes, an EY Bermuda Partner. “In talking with Lord Holmes and the Premier, clearly there’s a lot of common ground. Insurance has been a huge connection for a long time. And now, the same synergies apply to fintech. This is a dialogue we should continue.”
Attendees included former Bermuda Governor George Fergusson and other members of The Bermuda Society in London. “As keen supporters of the BDA’s efforts in London, we’re want to ensure we help cement ties between the City of London and Bermuda by creating opportunities for markets across the globe to understand the island as a sophisticated gateway,” said Sheba Raza, Counsel at Conyers UK and a Society Director. “We want to encourage opportunities for investors and international businesses as they seek to deploy capital and grow in a post-Brexit universe,” she added. “It allows us to ensure the UK and its family of territories operate in a cohesive, cooperative way to strengthen ties that exist already between our two countries.”
Euan Davis, of the Center for the Future of Work Europe at Cognizant Technology Solutions, was lunchtime keynote at today’s forum. He outlined “21 Jobs of the Future” as new technologies, business practices, and workers emerge over the next decade.
Eric Bertrand, founding partner of Centaur Fund Services, praised the BDA forum, his first as an industry participant, where he spoke on a panel about innovative trends in alternative assets.
“In 2015 when we decided to establish an offshore jurisdiction, we had options, but we decided Bermuda was the place for us to do our business. Three years later, we’ve grown from one to 16 people in our Hamilton offices, so, it proves our point,” Bertrand said. “I wanted to share our story that Bermuda is a jurisdiction of choice and a great place in which to complete a global presence. We have several offices around the world, but Bermuda is a very important one for us.”
The Bermuda Tourism Authority (BTA) partnered with the BDA on a networking reception that concluded the forum.
Tomorrow [Wednesday, November 28], the BDA continues the roadshow, staging a dedicated Bermuda Fintech Forum in the morning featuring a chat between the Premier and AIG CEO Brian Duperreault moderated by BDA Interim CEO Sean Moran. In the afternoon, ILS Bermuda hosts Beyond Convergence, a seminar focused on insurance-linked securities, whose global market Bermuda dominates.
To register for the November 28 Bermuda Fintech Forum, click here
To register for Beyond Convergence, click here
BDABermudaLondonUnited Kingdom
0 comment
0
FacebookTwitterLinkedinEmail