For the maritime industry it is the moment of truth to decide on appropriate solutions to comply with the IMO’s 0.5% global marine fuels Sulphur limit and soon to be followed CO2 emissions compliance regulations. Methanol as marine fuel has the potential to address both the emissions regulations. 7 maritime industry leaders and experts outlined their strategies and shared their views on how the marine fuels landscape will shift in 2020 and possible solutions available, to 121 participants at an IMarEST UAE branch-Sea Commerce Consulting organized seminar sponsored by Fedcom and the Methanol Institute. 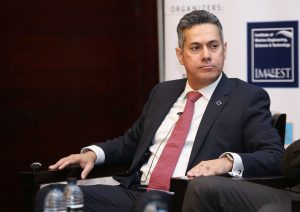 Capt. Saleem Alavi, President of Sea Commerce Consulting, a multi-disciplinary consulting & service provider, in his keynote presentation – ‘Methanol: The bridging marine fuel’ highlighted that Shipowners need to get the complete picture and understand the commercial, technical and environmental fundamentals of alternate fuels before opting to spend millions on conversion or ordering new ships. In comparison to LNG, Methanol is an easier to handle marine fuel and conversion and maintenance is much less expensive. Saleem cautioned that further regulations to limit CO2 emissions remain a real possibility and made a compelling argument while supporting Methanol as a potential solution to address this issue. 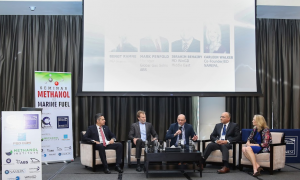 Ben Iosefa, VP Global Market Development Methanex provided a ship owner’s perspective on operating vessels using Methanol as fuel including the economics and availability. Methanex, headquartered in Vancouver Canada, is the world’s largest producer and supplier of Methanol to major international markets​. Methanex Corporation’s wholly-owned subsidiary, Waterfront Shipping has a fleet of 28 ships, including 7 methanol dual-fuel vessels launched in 2016 with 4 new methanol powered ships to be delivered in 2019. Teething troubles with the first Methanol engines have generally been sorted out and improvements made to new engines will be incorporated into the new ships. Ben mentioned Methanol is an innovative marine fuel solution with benefits such as emission reductions when compared to heavy fuel oil and MGO (99% SOx, 60% NOx and 95% PM), wide availability, low incremental cost, Fuel flexibility, Competitive fuel costs, Safe, environmentally friendly, successfully in use today and commercialization activity expanding – these being the common thread in all presentations on 11 December.

The Methanol Institute is headquartered in Singapore and is the global trade association for the Methanol industry representing the world’s leading Methanol producers, distributors and technology companies. Tim Chan, Manager, Government Relations and Business Development, Methanol Institute updated the audience on the current status of IMO regulations in the lead up to 2020’s Sulphur cap and the recently concluded IMO Initial Strategy on GHG Emissions by 2050. He explained that Methanol is a cost effective and future proof fuel which can be produced from a variety of feedstocks besides being widely available and alleviates many infrastructure limitations on land and at sea. It is one of the top 5 seaborne chemical commodities and has been safely handled for over 100 years. New build dual fuel tankers are only marginally more expensive than conventionally fuelled vessels and capital costs for conversions are less than LNG and after treatment technologies.

Carleen Lyden Walker, Co-Founder & Executive Director of the North American Marine Environment Protection Association (NAMEPA) and IMO Goodwill Ambassador, in her presentation ‘Sustainability in Shipping’ gently but profoundly explained that since the transference from sail to steam propulsion, the marine industry has not seen such dramatic requirements to change its operational practices to meet regulatory and societal demands. Although ship generated marine pollution is only a small component of the total global pollution problem, it is one that can virtually be eliminated with prudence. Accordingly, special efforts are urgently needed to remove this threat and to save the seas. Such a commitment can only be achieved if the regulatory level is complemented by a high level of environmental consciousness which requires a concerted voluntary effort to educate all sectors of the shipping industry. Recognizing that maritime transport is an essential part of international commerce which is the life blood of the world, NAMEPA a marine industry-led organization of environmental stewards preserves the marine environment by promoting sustainable marine industry best practices including educating seafarers, students and the public about the need and strategies for protecting global ocean, lake and river resources.

ScandiNAOS AB is a Swedish company working with energy efficient and sustainable shipping. The goal is to contribute to finding the best environmental and economic alternative for a sustainable and successful maritime transport industry. Bengt Ramne, Managing Director, in his speech ‘Methanol conversion of vessels – hands on examples’ talked about the Effship and the SPIRETH projects. Much of ScandiNAOS’s efforts have been devoted to alternative fuels, Methanol in particular and energy efficiency in general. Specific goals for the EffShip project included improving the efficiency of the ship machinery, introducing alternative marine fuels, using wind energy as a complementary propulsion force and developing applicable technology for reducing the emissions of CO2, NOx, SOx and Particulate Matter. In the SPIRETH project, Bengt instanced that a DME-Methanol mixture was tried on board Stena Scanrail and finally the Stena Germanica, sailing between Kiel and Gothenburg, became the first ferry in the world to operate on Methanol. ScandiNAOS was involved in the initial design process including arrangement, system design and overview of rules and regulations. The project was carried out in collaboration with the engine manufacturer Wärtsilä, the ports of Gothenburg and Kiel as well as the world’s largest producer and supplier of methanol, Methanex Corporation. The successful conversion was carried out in Gdansk, Poland. Bengt admitted that ScandiNAOS has also been part of the alternative design process and procedures for methanol bunkering. He concluded his articulate presentation with a video of the ‘GreenPilot’ project viz.  conversion of a pilot boat to methanol operation.

Mark Penfold, Manager, Global Gas Solutions, in ‘ABS views on the use of Methanol as marine fuel’ summarized agreements at the IMO MEPC 72 meeting, held in April 2018, regarding the initial IMO strategy on reduction of GHG emissions and at the CCC sub-committee meeting held in September 2018 regarding the development of requirements for methyl/ethyl alcohol fuels. Given the many compliance options available, he candidly pointed out that finding the optimal fuel strategy for a fleet is complex. Typical factors to be considered include the ship’s trading area, ship’s age, the availability of different fuels (i.e. LNG, LPG, Methanol etc.) in the area of operation, capital costs and operating costs. Mark provided information on various compliance options and how ABS Rules are in place for the Classification and risk assessment of all low flashpoint fuels and as a third party, can provide objective input about appropriate technologies or alternative fuels for specific vessels. Regulations are becoming stricter and to find the most cost-effective approaches, shipowners and operators must tailor their compliance solutions to their fleet. Mark identified the two major regulations addressing the safety aspects – the revised IGC Code applicable to all Gas Carriers and the IGF Code applicable to all other ships using gases or other low flashpoint fuels, together with providing information on the available and emerging engine technologies that meet these safety regulations.

Ibrahim Behairy, MD WinGD, Middle East eloquently discussed the latest developments in propulsion units using Methanol as a fuel. He brought to light results of the IMO GHG study in 2014 which revealed shipping contributed to 2.8% of GHG emissions, 15% of NOx emissions and 13% of SOx emissions. WinGD low-pressure dual-fuel technology has been developed to respond to the market requirements of providing a propulsion solution capable to run efficiently, effectively and safely on gas, on top of conventional heavy fuel oil or diesel oil. The technology is based on the low-pressure gas system concept. WinGD X-DF engines significantly reduce emissions with toxic effect on human health (NOX, SOX, PM) to lowest level in the industry. GHG emissions are reduced compared to conventional diesel engines. This system has a competitive initial investment and fulfils Tier III emission requirements without any external exhaust gas after treatment system. In brief, the technology allows a marine two-stroke engine to simply, safely and reliably run on gas.

The presentations provoked the interest of the audience who were given opportunities to raise their candid queries and challenge the ideologies put previously forth, in an interactive Q&A session with the distinguished panel of speakers.

As a culmination to the event, an all-inclusive international buffet lunch tempted the guests taste buds at the swanky Address Dubai Marina hotel.

Delegates showed a high degree of consensus on what makes for a good seminar. One of them – Leroy Dias, Managing Director SteelCorr DMCC said, “It was almost cliched to hear about LNG as a fuel in every Middle East maritime seminar. However, on 11 December, Methanol as a Marine fuel came as a breath of fresh air! I must admit that before this IMarEST seminar, I would never have thought Methanol had that kind of firepower, but yes it certainly gave a lot of people food for thought. Given the many IMO compliance options available, the identification of the optimal fuel strategy for a ship is complex. The suitably timed seminar assisted ship owners and operators in this decision-making process by opening up yet another feasible solution. Congratulations to Sea Commerce and the IMarEST UAE branch for hosting an eloquently discussed seminar”.

Another attendee – Senthil Kumar, Managing Director Silver Star Ship Management commented, “I came away from the presentations on Methanol with a renewed curiosity for this sustainable fuel which has the capability to address SOx and CO2 emissions regulations. Shipowners should now get the complete picture and understand the commercial, technical and environmental fundamentals of alternate fuels before opting to spend millions on conversion. In comparison to LNG marine fuel, Methanol seems easier to handle and conversion and maintenance is much less expensive. Congratulations to the speakers for educating us and many thanks for a great forum”.

For any information on Methanol as a marine fuel, please contact Capt. Saleem Alavi at Sea Commerce Consulting via info@seacommerce.ae