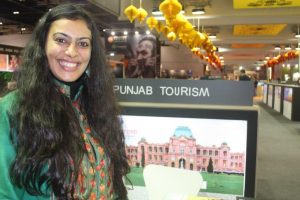 Alexander the Great took his conquering armies as far as what is now Punjab, in an invasion that changed the fate of India as a whole.

His ruthless foray into the region finds echoes to this day. One website poses the question: are the Punjabi people descendants of a mix between Indians and Greeks?

Whatever the answer to that may be, Punjab in the 21st century is keen to attract many thousands more (peaceful) visitors from Europe.

Punjab Heritage & Tourism Promotion Board is directing this endeavour, and among other initiatives the board’s senior project manager Alka Kapoor led a presence at the World Travel Market in London in November 2018.

Alexander’s troops crossed the Indus to defeat King Porus in 326 BC at the Battle of the River Hydaspes. His last great battle took the Macedonian Empire to its greatest extent.

Impressed by the bravery of Porus, Alexander made him an ally and added new territory to the domain of the defeated ruler. Joined by Porus with his elephants and 5,000 local fighters, Alexander laid siege to and sacked the city of Sagala, present-day Sialkot in northeast Pakistan.

Alexander founded two cities on opposite sides of the Hydaspes river, naming one Bucephala, in honour of his horse, and the other Alexandria Nicaea (to celebrate his victory) which is long thought to be the site of modern-day town of Mong. On the Hydaspes he built a fleet of 800 to 1,000 ships, so that some of his forces could return west by river and the Persian Gulf.

This was the furthest point of his empire that comprised millions of subjects and stretched across three continents from Greece to the Danube, to Egypt and to the Punjab, united as far as possible by Greek language and culture. What is said to be the last point of Alexander’s entry in India is at Gurdaspur, where he is believed to have fought one of his many battles.

Alexander came, saw and conquered but would die in Babylon of fever in his way home in June 323 BC. The instability that ensued resulted in a power struggle in which Porus was assassinated by a Macedonian general, giving way to the Indian Maurya Empire from 305 BC. Menander (reigning from about 160 to 135 BC) conquered the Punjab and huge territories beyond, to establish a great Indo- Greek kingdom, retaining Sagala as his capital.

Ms Kapoor handed us her business card, with a photo on its reverse of a typically fine piece of 19th century architecture, Durbar Hall at Kapurthala. The stately hall, completed in 1889 in the Indo-Saracenic style, stands at the heart of a city founded in the 11th century by Rana Kapur of Jaisalmer, after whom it was named. It was at one time the court of its founder, Maharaja Jagatjit Singh, and today is the district courts complex. Jagatjit Singh, who inherited his throne in 1877 and ruled the state for 71 years, is considered the architect of modern Kapurthala.

In London, Ms Kapoor and her colleagues were meeting tour operators and distributing a 146-page handbook describing a multitude of places of interest – of pilgrimage, cultural heritage and natural heritage – in Punjab. The cover of the guide featured a picture of the mausoleums at Nakodar, 34 km from the city of Jalandhar. The mausoleums commemorate Ustad and Shagird (meaning teacher and student).  Ustad Mohammed Momin was a tambura player for one of the minister-poets in the court of the Mughal emperor Akbar.

Unsurprisingly, the guide begins its list of itineraries with Amritsar, cradle of the history of Sikhism. The Harmandir Sahib Complex (Golden Temple) one of the most revered sites anywhere, and the most sacred of Sikh shrines, draws devotees from around the world, and is an increasingly popular tourist attraction. Construction of the Amrit Sarovar (the name is derived from the words ‘pool of nectar’ describing the man-made water tank surrounding the shrine) was initiated by Guru Amar Das, the third Guru, in 1570 and was completed by Guru Ram Das, the fourth Guru. 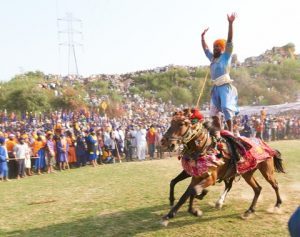 The Harimandar Sahib, or Darbar Sahib as it is also known, needed substantial restoration following its sack by the 18th century Afghan invader, Ahmad Shah Abdali. Maharaja Ranjit Singh oversaw the gilding of the shrine in the early 19th century.

In line with Sikhism’s basic tenet of universal brotherhood, the Golden Temple can be accessed from all directions. The official guide says that the main entrance is through an imposing clock tower, which also houses the Central Sikh Museum, and “provides a stunning view of the shrine and its reflection in the Amrit Sarovar. Another entrance is through the magnificent silver doors of the beautifully embellished Darshani Deori.

“It leads onto the causeway that connects the sanctum sanctorum with the Parikrama, the marbled surface surrounding the Sarovar. The lower facade of the Golden Temple is clad in marble, inlaid with precious and semi-precious coloured stones, using the pietra dura technique to create motifs. Within, the Guru Granth Sahib [Sikh scripture] is enshrined on the ground floor, in a room embellished with splendid frescoes.”

Close to the Darshani Deori lies the Beri Baba Buddha, another revered site. Baba Buddha lived for 120 years and served five Gurus during his lifetime, overseeing construction work at the Amrit Sarovar. Part of the complex is the seat of the Sikh temporal authority, the Akal Takht, the foundation of which was laid in 1606 by Guru Hargobind, who felt that the Sikh faith required a martial tenor.

Much rebuilding was needed following destruction in June 1984, in Operation Blue Star, the biggest internal security mission ever undertaken by the Indian Army. Prime minister Indira Gandhi ordered the assault to remove Sikh militants who were accumulating weapons in support of the Khalistan movement for an independent Sikh state.

The word “Punjab” is derived from the Persian for five waters. These are the five rivers – Chenab, Jhelum, Ravi, Beas and Sutlej – which flow through the vast plains. Historically, Punjab has been the stamping ground of ethnic groups including Aryans, Persians, Greeks, Afghans and Mongols, and the Punjabi language originates in the Indo-European linguistic family.

Undivided Punjab was the cradle of the Indus Valley civilisation, the remains of which can be seen at the Ropar archaeological site and its dedicated museum. It is believed that the Sanskrit epic Ramayana was written there by Valmiki ji.

Milestones were the migration of Aryans to Punjab between 516 BC and 321 AD, immediately followed by Alexander’s invasion. The Muslims ruled till around 1300 AD and then came the rise of the Sikhs from 1700 AD to 1849 AD.

Of the 1.5m men who set sail from India to fight in World War I, most were from Punjab. London-based author and historian Zareer Masani says this was “the largest volunteer army in human history.” In a letter to The Times in November 2018, Dr Masani said that the Indian troops in the two world wars were not reluctant conscripts but eager volunteers for whom military service was an honourable profession. “Their pay did much to enrich rural Punjab and make it the bread basket of British India.”

Although now referred to as unsung heroes, they were not forgotten in the years after the war, another author wrote to The Times. “Villages across north India and Pakistan are dotted with white stone memorials giving the number of Indians who went to the war and the number who returned. The Indians were also remembered around France and Flanders,” said Shrabani Basu, the London-based author of books including For King and Another Country. Indian Soldiers on the Western Front 1914-18. 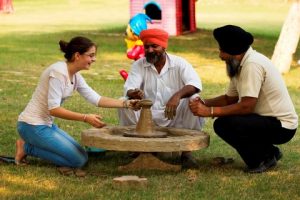 Punjab Heritage & Tourism Promotion Board says that the many festivals mirror the farming ethos. Bhangra, the traditional dance of Punjab which has achieved popularity worldwide, originates from harvest celebrations.

Another great Sikh festival is Hola Mohalla, which takes place on the second day of the lunar month of Chett, a day after the Hindu spring festival Holi but sometimes coinciding with Holi. This is a big occasion for Sikhs around the world.

The partition of India to create Pakistan in 1947 was sorely felt with deadly riots in Punjab, which was split between the two nations – Punjabis like to say “divided only in body and not in soul”.

The Indian entity of Punjab has been left as one of the smaller albeit more prosperous states of the nation. At 50,362 sq km, it is flanked by Pakistan to the west, Jammu and Kashmir to the north, Himachal Pradesh to the northeast and Haryana and Rajasthan to the south.

Climate has been a significant factor in shaping the economy of the primarily agricultural state, which helps underpin the food security of the Indian Republic. Farming depends heavily on the rains, which fall mainly from early July to the end of September. In addition to the many city attractions, the state hopes to lure visitors to farm stays.

“Punjab, the land of people with golden hearts, lush fields and free flowing rivers, with its rich history, green surroundings and diverse culture, has everything to keep tourists from across the world enthralled,” enthuses one of the brochures of the tourism board. Extensive details on the state are at www.punjabtourism.gov.in

MSC Cruises launches a new line from the...