Markets still falling with the …exception of Capes and Cleans, but… 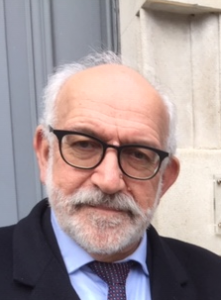 The BDI (Baltic Dry Index) clinched earlier on today 22 points thanks to the volatility governing the Capes… Geopolitics are about to produce global chaos… John Faraclas’ brief recap:

The BDI now reads 1,077 points – plus 22 thanks as said above to the Capes… All other indices fell amid raised eyebrows..

The Capes’ BCI was up 120 points (from an 83 points fall yesterday) and now stands at 1,868. Caution… Mind me we hope and pray that the market improves for the benefit of all stakeholders, but… one size cannot constitute or dictate a  or the market ! 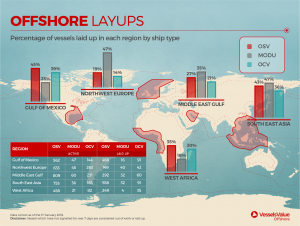 Percentage of vessels laid up in each region by ship type

Herebelow VesselsValue‘s Head of Offshore Robert Day is sharing his analysis of the offshore industry from a global perspective.

The definition of ‘laid up’ used in this context: ‘Estimating the number of vessels in layup is an imperfect science, however, using a big data approach VesselsValue can provide a valid estimation using the following methodology. VV observes the recency of a vessel’s AIS signal and filters the data appropriately. Vessels that have not signalled for over a week are considered to be in layup.’

It is no secret that the Offshore sector is suffering. Through observing the figures, we can see that some areas are experiencing more layup that others. The worst of the market seems to be in South East Asia, where layup is at more than 36% in each subtype. More unexpectedly though, the US Gulf is closely following S.E.A in terms of layup consistency. The Middle East and West Africa regions are in a similar state and least surprisingly North West Europe remains the leading region globally.

Sentiment may change but the figures are what matters and will truly determine the speed and likelihood of a full offshore market recovery.

The Geopolitical situation – which greatly affects Trade and Transport and conversely Shipping, gets more perplexed with the European Union and Europe in general amid Homeric dire straits.

The MIGRANTS maintain the lead of all issues… Shame!

Caution with BREXIT and the Balkans as well as with the Trade Wars, the Russian attempts in the Balkans, the faulty line Gib to Afghanistan  and Caucuses to the Horn of Africa…

The Shutdown in the USA causes even more discontent beyond the US’s frontiers… Ah! Greece too might soon face major dilemmas….

What a welcome that was in Belgrade for Russia’s Putin! Accusing the West and in particular the USA and EU on all Balkans  issues… He’s too concerned on Kosovo and fYroM; we shall see  what he’s up to in the tinderbox of Europe! 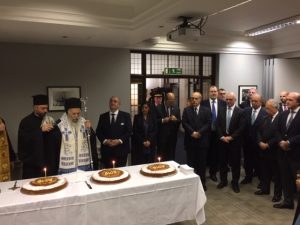 Over 200 members, friends and guests enjoyed this traditional event. Archbishop Gregorios of Thyateira and Great Britain officiated and cut the cake!

Once again we had an excellent speech by the Chairman of GSCC, the very eloquent Harry J. Fafalios – will upload same in due course. 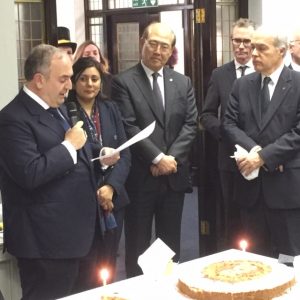 The British minister for Shipping  Nusrat Ghani also delivered a short and to the point speech.  She’s on all counts very close to the industry  and in the last two encounters – Posidonia  2018 speech at the British Ambassador’s residence in Athens and in IMIF’s / Maritime London November annual dinner, she proved well aware of all issues the industry is facing!

The Secretary-general of the IMO Kitack Lim was there too heading the entire international shipping industry with all sectors’ stakeholders present not only from the Square Mile but from all over Planet Ocean.

The Greek Ambassador to the Court of St. James Dimitrios Karamitsos-Tziras – who took per custom the first piece from the Vassilopitta was there too as did the Cypriot representative at the IMO Argiris Madella. 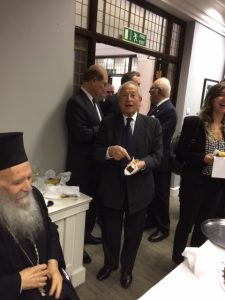 Except shipowners,  shipmanagers and shipbrokers, present were Chairmen from P and I Clubs Hugo Wynn-Williams  from the UK P & I, Andrew Bardot  ceo of the IGP&I, Lawyers – amongst them Costas Frangeskides and Katerina Botsini from HFW, Katerina Nomikou, Classification Societies – Nicholas Brown, Theodosis Stamatellos  and Constantin Corniciuc from LR , Yiannis  Calogeras from Bureau Veritas, Costas Pappadakis and Nick Roper from DNV GL,  Mitsuhiko Kodogawa from ClassNK…

Associations representatives – the ever present Bridget Hogan from The Nautical Institute, Dimitris N. Monioudis from R&K and president of the HESGB accompanied by at least 15 members of the society…

Salvage expert specialists – Andreas  A. Tsavliris from the Tsavliris Salvage Group who doesn’t miss an event; 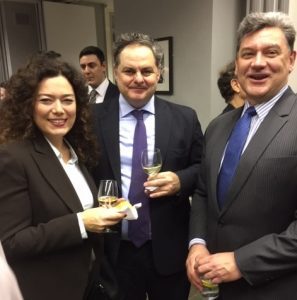 Flag Representatives – LISCR’s Costas Ladas made it! Academics and Arbitration specialist – Dr. Aleka Mandaraka-Sheppard was there – she managed to come early but left due her event at the LSLC running in parallel at Devonshire Square (see below), Dr. Nikos Nomikos from Cass Business School and students from his department were there too… George Pirinis et al ! 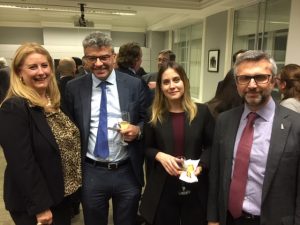 INTERCARGO’s Secretary-General Dr. Kostas Gkonis, HELMEPA’s Dimitris Mitsatsos with his wife Christiana Prekezes, the vice president of the HSSA (Hellenic Shortsea Shipowners Association) and WISTA-Hellas vice president Elpida J. Petrakis  with president Haralambos Simantonis  – a frequent visitor at the City of London and attendee of this event, banker Aggeliki Koutoulia from Julius Baer in Luxembourg; Themis Vokos – Mr. Posidonia!!! was there and in a jovial as always mood;  Jon Standerick CEO of Maritime London was there with Olga Jaques – both doing an excellent job! 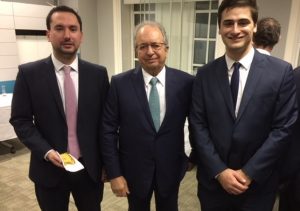 John M. Hadjipateras president  of the Oinoussian Benevolent Fund was there as well as his uncle Pandelis J. Hadjipateras and cousin John P. Hadjipateras. Constantine Is. Caroussis, Alex Xenakis, Dimitri Dragazi from the Latsis group, Petros Kontraros, Accountant specialist Rozeta Sotiri from Moore Stephens and many many others – the list wont’ end! Counted over 25 women! 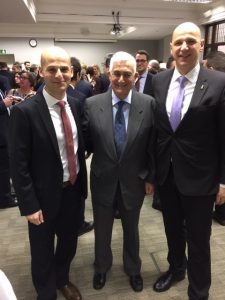 The LSLC (London Shipping Law Centre) for the Cargo Claims and Bills of Lading event at Squire, Patton and Boggs auditorium at Devonshire Square broke another record of attendance. I was lucky to find a seat half way through  during the last presentation by Graham Harris from the hosts on the “Volcafe v CSAV [2018] UKSC 61”. 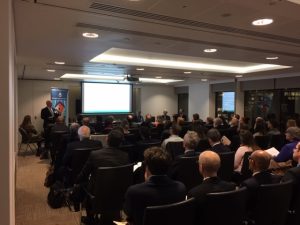 Graham Harris at the podium delivering his speech

A few but interesting questions were aired, one of them coming from Professor Yvonne Baatz, now at Queen Mary University in London at the Humanities & Social Sciences faculty. Discussions continued at the drinks and dips reception until late… 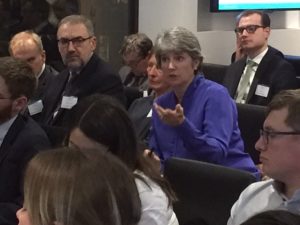 Will revert soon with a full write up.

Have a nice evening and remain on guard from actions emanating by Pirates, Terrorists, Criminals and Business Hooligans whatsoever wherever you are on Planet Ocean…

Things are getting sour…