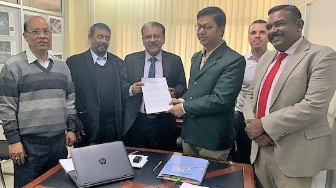 IRClass personnel signing the MOU with the Government of Assam

The Indian Register of Shipping (IRClass) and the Government of Assam, a key state in India’s north-east, has signed a Memorandum of Understanding (MoU) to further enhance the state’s inland water transport (IWT) system to improve commuter safety.

The MOU follows the funding agreement between the Government of Assam and the World Bank to modernize and transform inland water transport in the state which has the largest network of navigable inland waterways in India. Plans include the integration of high quality passenger and vehicle ferry services into its wider transport network.

IRClass will be providing technical assistance to the Government of Assam including the preparation of technical specification of vessels, evaluation of shipyards bids, inspections during construction and certification.

This MOU will be administered under the guidance and initiative of the Assam Government’s Commissioner & Secretary (Transport) and IRClass will partner with Assam Inland Water Transport Development Society (AIWTDS) to support its plans.

“IRClass is delighted to be part of this initiative which will raise the safety and technical standards of the state’s inland water transport system. This initiative will help boost the state’s growth with scaling opportunities including the development of IWT terminals, port townships and operation of river taxis. IRClass will soon be opening an office in Guwahati to work closely with the Assam Government in developing its inland water transport.”

International community must cooperate now to build a...