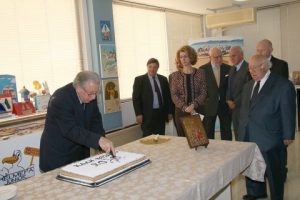 In the presence of HELMEPA’s Honorary Members, the Board of Directors, the Chairman of the Ukrainian Marine Environment Protection Association- UKRMEPA, representatives of Moore Stephens Chartered Accountants and the staff of the Secretariat, the Chairman, Dr George Gratsos cut the traditional New Year pie, yesterday, Wednesday 30 January, at the association’s offices. The lucky winner of the “flouri” (coin) was Mr Michael Dalacouras, Deputy Treasurer of the Board. 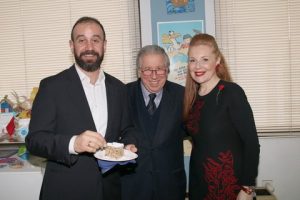 Mr Michalis Dalacouras – Deputy Treasurer of the BoD, with the lucky coin, Dr George Gratsos – Chairman of the BoD and Ms Irene Daifas – General Secretary of the BoD of HELMEPA

Dr Gratsos wished all the attendees good health and progress for 2019 and thanked the Director General Mr. Dimitris Mitsatsos and his staff for their efforts. He concluded his remarks wishing that HELMEPA continues its work with the same strength, despite the current difficult times.

The Board of Directors convened at the first session of the year, following the event. 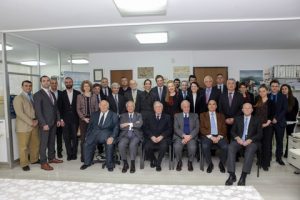 Commemorative group photograph from the event