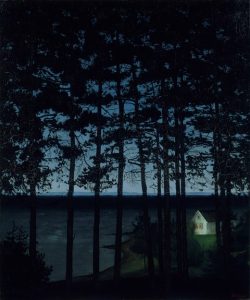 Tall and slender but sturdy trees are the sole witnesses to many of the dramatic scenes painted by Norway’s Harald Sohlberg. He had no need to insert the human presence when he could make the typical woodland around him frame the vistas he loved and narrate the story. He would orchestrate – fully comprehending the affinity between music and painting – his acute feeling for colour to convey intense, dream-like atmospheres.

Born 150 years ago, Sohlberg was a master of landscape that is other-worldly and mystical, and whose canvases have until now been little known outside his native land. His profound compositions go far beyond a sylvan charm to delve into the essence of Nordic nature. 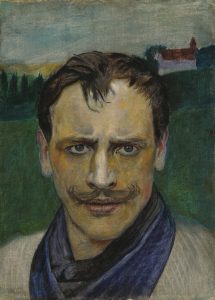 Despite the absence of people in his pictures, the viewer senses their impact, for here nature is imbued with supra-human qualities and the results dance to an almost musical palette of colour. We can see the wood for the trees, for there is unspoken spiritual import.

In a wide-ranging retrospective, Dulwich Picture Gallery brings in Sohlberg from the cold as far as the UK is concerned. It is thereby remedying the neglect which has contrasted his huge popularity in Norway, where his mastery of and emotional response to the mesmerising light of his surroundings is admired. Heavenly colours glow in skies of blue and orange, while dusk is given its moody due.

Under the wing of the brilliant independent curator Kathleen Soriano, a fascinating overview of the artist’s whole career is studded with numinous interpretations of the Nordic wilderness and even of small-town life, and, what is less often remarked upon, the influence of the mighty fjords and the sea.

Although not what might be called a fjord painter, Sohlberg sometimes employs the expansive waters as a perspective backdrop, and on occasions references the Japanese prints popular in his time with their powerful, untamed waves. 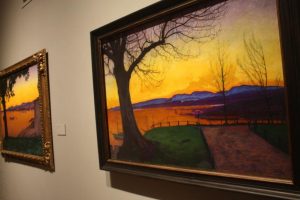 From Akershus (at left) and Spring Evening, Akershus fortress.

During his lifetime (1869–1935), Norway was among the poorer countries of Europe, although it had a large merchant fleet and was beginning to take in modern industry. One of the paintings entitled Exodus indicates vessels setting out on what was probably another emigration voyage to North America.

Ms Soriano, who has a long list of curatorial roles and has been a judge on the Sky Arts TV show Artist of the Year, said that in recent years she had come across Sohlberg’s work regularly, as would any visitor to Norwegian museums, and it was clear that he “really deserved to be better known.”

She said the exhibition champions “an artist whose work captures both a sense of the everyday and an elegiac, mystical spirituality.” 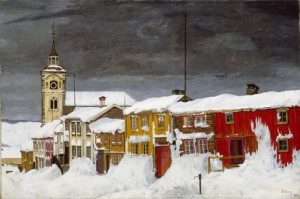 Street in Røros in winter.

She emphasised that although he rarely included people in the landscapes, there were intimations of their impact in houses, fields and factories. Such is the case in Fisherman’s Cottage ((1906, on loan from the Art Institute of Chicago) where the tiny dwelling yields a comforting refuge amid the trees from the snow and harshness of the seasons.

Trees and even the telegraph poles installed as part of rapid industrialisation seeming to stride across the land, become anthropomorphic – taking on human characteristics. They speak to the mystery and danger one fears in the forest. 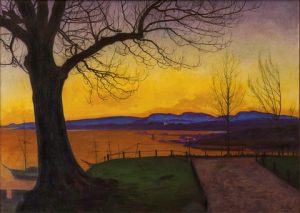 Ms Soriano drew attention to the little-chronicled influence of Sohlberg and contemporary Norwegians on the Canadian landscapers known as the Group of Seven, particularly its best-known practitioner, Tom Thomson, in developing what was to become a distinctive Canadian style. Two of the Group of Seven, JEH MacDonald and Lawren Harris, are said to have sensed a deep spiritual affinity when they visited the 1913 Exhibition of Contemporary Scandinavian Art mounted in the US by the American Scandinavian Society.

Like the better-known Norwegian Edvard Munch, although with a radically different style, Sohlberg was individualistic: determined to plough his own furrow, shunning categorisation and distancing himself from Impressionists whose abandonment of pictorial detail for looseness he scorned. He remained at home in the depths of the forests that symbolised his passion for nature, bringing out the fantastical within the familiar.

The gallery guide refers to “a symphony of colour.” He loved the musical qualities of colour – at least two paintings with a nautical aspect he entitled Andante. He would select a dominant colour with which to co-ordinate other hues “just as in music when notes and chords harmonise with the solo,” he wrote. 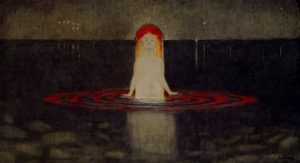 In Summer Night of 1899 (National Museum of Art, Architecture and Design, Norway) he displays the immense view from his apartment in the Oslo suburb Nordstrand looking west across the Kristiania Fjord. This large painting is believed to have been made to mark his engagement, with a table laid for two but the lovers absent.

Then from the depths emerge the mermaids… a Symbolist take on these mythical creatures as opposed to the classical interpretation. They are malevolent – luring men to their deaths – more than seductive, sometimes bearing a mocking mien. In an 1896 oil painting a mermaid rises from the sea, framed by a blood-red moon. In a painting of two years later a golden halo of the moon makes the figure reminiscent of a Greek icon. A parallel has been drawn because of the motif of the moon in Madonna from 1892-5 by Munch. 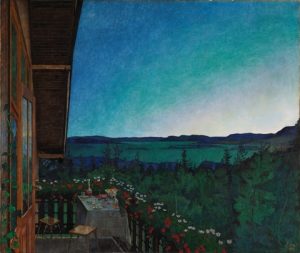 With close to 100 works, the exhibition traces Sohlberg’s entire career, from his earliest production as a 20-year-old in 1889 and shows where he meshes with Norwegian Naturalism and with Symbolism, to which he was exposed during his training in Copenhagen and Christiania, as Oslo was known at the time.

Born in Kristiania in 1869, he trained as a decorative painter before studying for short periods under fellow Norwegian artists and attending the art school of Kristian Zahrtmann in Copenhagen, where in 1892 he encountered 50 paintings by the post-Impressionist Paul Gauguin (who was married to a Dane, Mette-Sophie Gad) and other French artists. He went on a study trip to Paris (1895-6) and took life drawing classes in Weimar, although he was already a skilled portraitist and widely exhibited. In fact, he very rarely made portraits – “he is just not interested in this form,” said Kathleen Soriano. On show at Dulwich is a self-portrait from 1896, held by a private collection.

When the newly independent Norway proudly showcased its art at home and overseas, Sohlberg’s landscapes and townscapes were frequently selected. 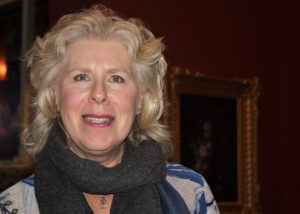 Sohlberg was drawn to parts of Norway that were overlooked by other artists. One such place was the small copper-mining town of Røros — a dark and grimy place which his canvases “turned into one of the most romantic sights you have ever seen,” as Ms Soriano put it. Røros, on the mountain plains of central Norway, is now a Unesco World Heritage site. He lived there with his wife Lilli from 1902 to 1905 and the town’s colourful, weather-beaten wooden houses framed against bright, white snow inspired many paintings and studies including Street in Røros in Winter (1903, National Museum of Art, Architecture and Design, Norway).

Industry is beginning to encroach on the old way of life – in one work are seen houses and factories along the Aker river which flows through the capital. 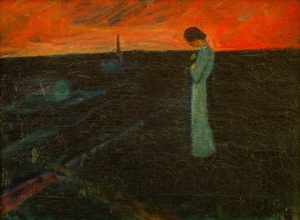 The Girl and the Daisy. Private collection.

The final room is dedicated to Sohlberg’s time in the Rondane mountains where he was a keen skier. Regarded as the National Painting of Norway, the bold Winter Night in the Mountains, finished in 1914, after 14 years, is the glorious focus, and studies and variations on display offer an insight into his creative process, revealing his long obsession with the subject.

Within the exhibition is a newly commissioned installation in fibreglass by German-born, Bristol-based Mariele Neudecker. This, entitled And then the World Changed Colour: Breathing Yellow is the latest in her series of water-tank productions and is inspired by the mighty tree-scape of Sohlberg’s Fisherman’s Cottage. Four-dimensional and typically the size of a square painting, it is, she said, “the densest forest I have ever made.”

The exhibition is supported by Sparebankstiftelsen DNB and is organised in partnership with the National Museum of Art, Architecture and Design, Oslo, and Museum Wiesbaden.