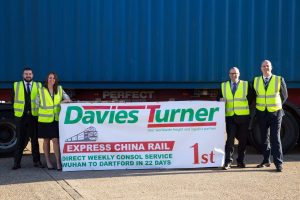 Tony Cole, head of supply chain services at Davies Turner says: “While Storm Gareth caused havoc recently, causing the closure of ports and delays to ocean freight shipments, our Express China Rail service has been suffering no such problems, arriving several days ahead of schedule.

“Last week, our consol box arrived and was unpacked after just 19 days, which was a record time. The scheduled transit time from the Wuhan rail hub to our Dartford depot is 22 to 24 days.

“Since we launched the dedicated weekly consol service from Wuhan in November 2018 we have seen it go from strength to strength. Bookings have increased by 195 percent.”

Davies Turner’s Express China Rail Service sees containers carried by rail from Wuhan directly into Duisburg in Germany. They are then trucked under bond to the port of Rotterdam and transported by ferry to Purfleet, near Dartford for on-carriage by truck to Davies Turner’s distribution centre, where they are discharged, customs cleared and delivered.

Cole adds: “The more direct method of moving the container from Wuhan to the UK that we introduced in November last year enabled us to offer lower rates to the market, and reduced the possibility of delays, as well as strengthened security. The upgrade is already paying dividends.”

Philip Stephenson, chairman of Davies Turner comments: “The record transit time achieved by our overland rail service, when oceanfreight shipments were being delayed by inclement weather, showed another advantage of rail over ocean freight.”

How do central banks invest?

Congestion is not just for Christmas