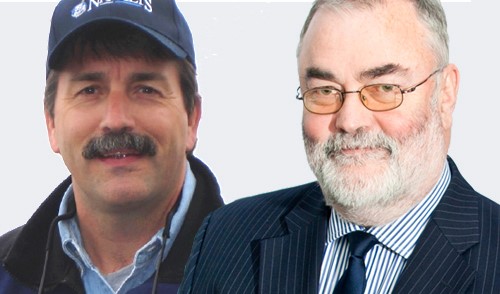 The keynote speakers for two influential Institute of Marine Engineering, Science and Technology (IMarEST) events – Engine As A Weapon (EAAW VIII) and the Marine Electrical and Control Systems Safety Conference (MECSS 2019) – being held alongside each other for the first time, have been announced. The duo of events is being held at the America Square Conference Centre in London on Tuesday 2 and Wednesday 3 July 2019.

All delegates will be able to listen to both keynote addresses, as the Chairmen of both events, Cdr Ian Hassall RN, T45 Deputy Team Leader and T45 Platform Chief Engineer, Ministry of Defence, UK for EAAW VIII; and Kevin Daffey, Rolls-Royce and IMarEST President-Elect for MECSS 2019, explain: “Both events will join forces on Day One with the aim of discussing the shared challenges for both the naval and commercial arenas inspiring innovation across the breadth of the maritime domain.

“We are delighted to announce that two inspirational and highly knowledgeable speakers will deliver keynote addresses on 2 July. Steve Markle will speak to the EAAW VIII theme ‘Evolving intelligent platforms for the future battlespace’; while Chris Hodge’s address will reflect the MECSS 2019 theme ‘Inspiring safer systems at sea’.

“The programmes have been organised in parallel, enhancing the invaluable networking opportunities between government, industry and academic representatives both in the UK and overseas,” they add.

“The Joint Technical Advisory Committee is currently formatting the full programme which will be launched in April and registration will open on both websites shortly.”

The duo of events is organised by FIGS Events on behalf of IMarEST with Babcock International Group as the first major sponsor of EAAW VIII.  Further information on all aspects of the events is available on www.eaaw.org.uk and www.mecss.org.uk.

EAAW VIII’s keynote speaker Steve Markle is the Program Manager and Director of the Electric Ships Office within the US Navy Program Executive Office Ships, having assumed this role in 2014. He is responsible for developing power and propulsion systems and equipment for the US Navy’s fleet. He is also steward of the living Naval Power and Energy Systems Technology Development Roadmap written to guide intelligent technology investment toward meeting current and future fleet warfighting capability needs.

Mr. Markle retired from active duty as a career US Navy Engineering Duty Officer in 2004. His past professional activities include Engineering Director for Navalis Environmental Systems a marine pollution control equipment manufacturer, and Operations Manager for the Engineering and Manufacturing Division of Geo-Centers, Inc. His active duty assignments included back-to-back jobs on the staff of the Chief of Naval Operations, Surface Warfare Directorate as Littoral Combat Ship Budget and Acquisition Action Officer and then Fleet Maintenance and Modernization Section Head, he served as Assistant Project Manager for the T-AKE Program within PEO Expeditionary Warfare, and as Staff Naval Architect on exchange with the Canadian Department of Defence.

Mr. Markle is a qualified Surface Warfare Officer and in submarines through the ED Dolphin Program. He is a 1994 graduate of the MIT 13A Program earning both a Master of Science Degree in Mechanical Engineering and the Naval Engineers Degree. He is a member of the DoD Acquisition Professional Community and is registered as a Professional Engineer in the Commonwealth of Virginia. His awards include the 2001 ASNE Jimmy Hamilton Award, DoD Individual Environmental Quality Award, DoD Program Environmental Award, and the ASTM Haas Award. He has published 35 peer reviewed professional papers and monologs, and holds one issued and five pending patents. He is an IMarEST Fellow and member of ASNE, SNAME, and the ASTM.

MECSS 2019 keynote speaker Professor Chris Hodge’s established reputation in Marine Engineering makes him a thought leader at BMT and within the Maritime Industry. Starting his career in the Royal Navy, Chris gained valuable experience in nuclear and conventional submarines when he was appointed Project Officer for the development of propulsion technology. Rising through the ranks, Chris completed his naval service as the Head of Specialist Electrical Power Systems at the Ministry of Defence following 26 years’ service. He then spent some time at Rolls-Royce Marine Division before joining BMT as the Chief Electrical Engineer since 2005.

As a Chartered Engineer, Chris has a BSc in Mechanical Engineering, a Post Graduate Diploma in Nuclear Science & Technology and an MSc in Electrical Engineering. He is a Fellow of the Royal Academy of Engineering where he served as an elected Trustee and Council Member from 2005 to 2009 and is also an Honorary Professor of Engineering at the University of Warwick.

Chris is a Past President of The Institute of Marine Engineering, Science and Technology (IMarEST) following long-term involvement as a Fellow, Trustee, Council Member, Vice President and Chairman of the Board of Trustees. He was Editor-in-Chief of the IMarEST Proceedings Part B until he took up the Chair of the Institute’s Board of Trustees. He was also the Editor of the MOD Journal of Naval Engineering until it was merged with the Review of Naval Engineering; he remains a member of the editorial board for the new journal, ‘The Naval Engineer’.

In 2015, Chris received an OBE in recognition of his services to Royal Navy Engineering; he was awarded an Honorary Fellowship of IMarEST in March 2019.