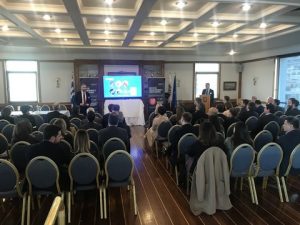 North’s Colin Gillespie and John Southam spoke to the delegates on the evolving nature of safety management and the emergence of Safety Management 2.0.Arguing that a systems-based approach to safety that relies on processes and checklists is no longer sufficient, Colin and John explained the importance of a new approach to safety that embraces other vital elements, including leadership, risk management and culture.

In response, North launched a new self-assessment tool last month called SCORA (Safety Culture Organisational Assessment).Developed in conjunction with leading safety consultancy Green-Jakobsen, SCORA gives members the opportunity to measure their organisational capacity for safety both on board and ashore.

Meanwhile, Helen Yiacoumis presented on bunker quality issues, making the case that owners and operators need to be thinking about more than just the 2020 sulphur cap when it comes to bunker management.Helen spoke to delegates about ‘the OW Bunker effect’ and the steps to take to avoid double-jeopardy, whereby owners can find themselves liable for paying twice for the same bunkers.

The presentation also took in recent bunker quality disputes; often referred to as the ‘Houston problem’, but what is a global concern, with reports of fuel contamination in multiple ports. The discussion also covered the impending reduction of the MARPOL Annex VI global fuel sulphur cap. With less than nine months to go, Helen updated Members on the technical and contractual considerations, including the key charter party clauses to consider, as also summarised in North’s 2020 Vision briefing document.

Claire Andrews also presented on the use of Early Intervention as an important tool in the litigation tool box to try and resolve disputes at an early stage. The process occurs sooner than mediation allowing the participants to make “an informed decision from an informed position”. Participants benefit by retaining control over a claim and having a real say in the outcome whilst avoiding unpredictable litigation.

Speaking after the seminar, Tony Allen, Director (Greece), said “Our annual seminar here at the Yacht Club of Greece is our premier event for our Greek membership and it is an invaluable opportunity, not just to share our latest insights and guidance with our members, but also to address the issues that are top of their agenda. The discussion this year spanned both immediate challenges and the long-term opportunities facing our members.

“As a progressive shipping community, our members here in Greece recognise the importance of ongoing education and training. Whether it is the latest safety management initiatives, bunker quality concerns or preparing for 2020, we are proud to play our part as a trusted partner to our Greek members, enabling them to trade with confidence.”

In what was a wide-ranging agenda, the seminar also covered bills of lading, early intervention and an update on news from the Club, as well as a Q&A with the 100+ delegates in attendance.

North’s Greece office opened in 2000 and they relocated to a new office space in September 2018, along with a raft of new appointments to grow the team and strengthen its ability to support the Club’s sizeable Greek membership.