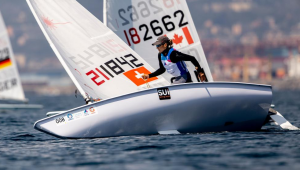 Laser Radial racing commenced on the third day of competition at Hempel World Cup Series Genoa and Line Flem Høst (NOR) and Switzerland’s Maud Jayet took the first race wins of the series to share an early lead.

The 67-boat fleet is split into blue and yellow for the qualification series and the Norwegian triumphed over Greek favourite Vasileia Karachaliou in the blue fleet with Jayet defeating Rio 2016 bronze medallist Anne-Marie Rindom in the yellow.

Only the Laser Radial and the 49er yellow fleet managed to complete a race on Wednesday as a consistent breeze failed to develop. A 3-4 knot south easterly breeze was just enough for the Laser Radial and 49er to sail. The 470s and Finn will have to wait another day to get their competition underway. Meanwhile the Nacra 17 remain on three qualification races, the 49erFX on five and the Laser on two.

The calibre of competitors in the Laser Radial is extremely high with numerous Olympic, World Championship and World Cup medallists.

Mistakes can be punished quickly but racing in the yellow fleet, Jayet was near faultless, leading at every mark. “I started quickly,” commented Jayet, “I got out of the pack to sail at the front of the race and managed to beat Anne-Marie.”

Long waits on the water for a sailable breeze to develop can make the mind wander and when racing does start, concentration levels have to rise as the Swiss racer explained, “It is hard to keep focused when everything is going slowly. You have to learn to be patient. As soon as you lose focus you would lose your speed. In days like this, whoever is the most patient will be in front.

“From the start, I try to relax. Instead of running after the gusts, I just wait until I get one. It was one of those days where you could see girls on the other side of the course had more wind but by the time you would get there, it would go. You have to wait your turn and eventually it will come.”

The secret to mastering the conditions and maintain focus is simple, as Jayet continued, “You have to force yourself to sail and train in these conditions. Whenever people see light winds they might not train. You have to train in really light sessions and learn how to stay calm. It’s important to get used to it. None of us can choose what we sail in so we have to try and be good in strong and light winds.”

And as a Swiss sailor from Lausanne, sailing out of Societe Nautique de Geneve, has training and sailing on famous Lake Geneva helped? “I don’t sail on the lake much anymore,” she laughed, “but on days like this, I wish I did more often.”

In the blue fleet, Flem Høst was equally impressive, leading from start, “I managed to separate well from the fleet so I could get some private wind,” explained the Norwegian. “Then it was about staying on top of everyone which I managed to do.”

On keeping focus, the Norwegian had a similar mindset to Jayet, commenting, “It is hard to keep focused. You see everyone coming from behind so it’s important to focus on doing the basics right and keeping calm. I just focused on myself and tried to forget about everyone else.

“You can train the technique in lighter winds, speed, tacks and gybes so you have the right technique but then it’s about breathing right and keeping your cool.”

Greece’s Karachaliou followed Flem Høst in to the finish with the experienced Tatiana Drozdovskaya (BLR) and Carolina Albano (ITA) coming through in third and fourth respectively.

Just one 49er race was completed and Croatian World Champions Sime and Mihovil Fantela clinched it, securing their second race victory from three completed so far. Their remaining race result is a disqualification that they picked up in the opening race.

The blue race was the third of the series and does not yet count on the overall leaderboard as the yellow were unable to complete a race on the water. Once their third race is completed the scores will be combined.

Racing is scheduled to continue at 11:00 local time on Thursday 17 April with additional races planned for all fleets in a bid to catch up on those lost.