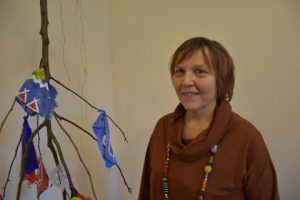 An upturned apple tree gave a new twist in a London art exhibition to the concept of “cabinet of curiosities,” which began as a 16th century fancy of aristocrats and merchants. Such cabinet collections, large and small, originated during the Italian Renaissance as a means of housing esoteric objects from foreign lands. From the 18th century the collections were of more mundane objects and of peculiarities of the natural world, and whenever it is revived today, the practice continues to fascinate and to jolt the… curious… observer. 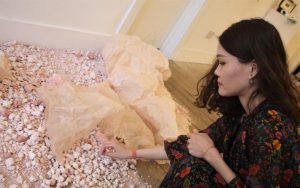 Jenny Timmer, a London conceptual artist who bases much of her output on the accumulation of objects to illustrate specific motifs, celebrated the formulation when she curated the group exhibition Cabinet, which ran but briefly – from April 9 to 14 2019 at Espacio Gallery in Shoreditch – but left a lasting impression. The London suburb has for centuries been a crucible for experimental and exciting works: Shakespeare and his fellow actors who played in two theatres there knew it well.

Jenny lined up propositions apposite to framing in display cases from two score practitioners, albeit without physical display cases. While everyone pursued their individual missions, on their different planes they interacted to manifest largely ecological concerns. 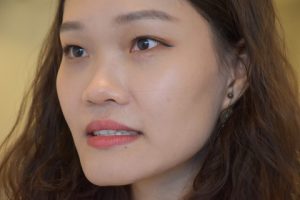 It was from one contribution to the next quite unpredictable, but there was an overarching appeal to protect our social capital. Purely coincidentally, the spectacle came just ahead of the climate change protests of the Extinction Rebellion movement in London and other European cities.

The artists are enamoured of the stuff of life, of the large and little things that make the planet tick, and many of the array of contributions underlined the need to correct the apocalyptic course of mankind. It was a challenge to the old order and to old assumptions. 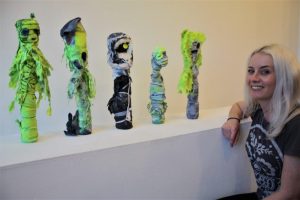 The gallery described this “cabinet of contemporary curiosities” as “an intriguing collection of artworks – emanations from the human imagination, creativity and consciousness; an emporium of the weird, wonderful and fun. The works exist for themselves, carry their own potent charge, provoking some deep stirring in the observers or probing their consciousness and questioning their understanding.” 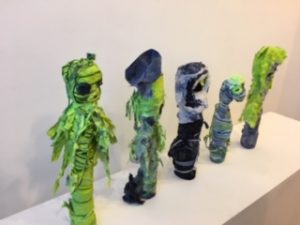 The Rascals. By Kelly Seeeney.*

In addition to overseeing proceedings, Jenny offered her own cabinet installations. The first was Winds of Time, a tribute to indigenous peoples. It was built around a slim apple tree, uprooted subversively to symbolise the deracination of populations and natural phenomena. Nine flags made from crude plastic represented nations including the Sami of the north of Scandinavia, Ainu of Japan, Khoisan of southern Africa, Aborigines of Australia, the Zapata of Chiapas. It was a reference too, to the waste plastic that ends up being blown into tree branches. 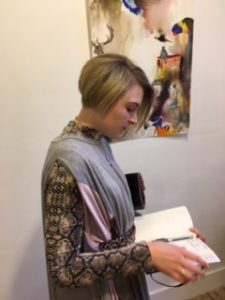 Separately, Jenny produced an Alchemist’s Pantry: Experiments in Luminescence. This consisted of household substances in a range of jars and tubes: a somewhat alarming disposition glowing in a darkened alcove. It chimed with the chemistry or alchemy of the show: disparate components both clashing and working together, the whole greater than its parts.

This is part of Jenny’s investigations of “changing identities and forms” and her installations “often cast political shadows.”

London-based Jenny is influenced by her early childhood “in remote southern Africa, close to primal nature” and “a spirit of the primitive to produce an impression of an anthropological collection.” She seeks “to represent the essence of human spirit, the evolution of humans over millions of years and how our common neurology manifests in language, identity and culture.” 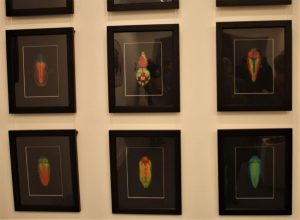 Taking a different approach, Chieh An Teng, known as Ann, focuses on memory, in this instance by scattering across a section of the gallery floor pinkish stones and rubble. Pink for buildings in Italy, for beaches in Greece, for cherry blossom and for the colours of many flowers. Originally from Taiwan, Ann “believes growth and decay are the consequential processes of reality, and all things in life have their own timescale. Therefore, it is only inevitable that each object has its own amount of time in this world.” She is interested in “the presentation of time and ascertaining how such subtle elements are seen or sensed.”

Ann has recently exhibited in group shows at the Koppel Project Hive and the Crypt Gallery, St Pancras Church. 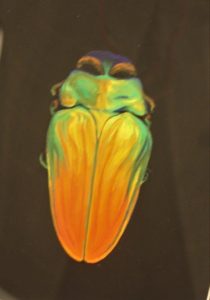 One of Rachael’s Beetle panels.

Sam Hodge showed photopolymer etchings from her series Pelagic Plastic. Prints often deal with human-made objects that have been transformed by accident and weathering, she said. She collects “specimens of (un)natural history, things eroded, smashed or squashed flat and transforms them into print.” The images resemble geological forms and she adds that they “remind us of our material connections and entanglements.”

The recent work of Rachael Tyler Bacon “reflects on ideas of the macrocosm and microcosm” which was represented here by separate images of nine beetles, painted in oil on black paper with Stuart Semple black surround. This brand is, says Rachael, “the darkest paint available on the planet.” Her paintings concentrated on rapidly declining species of insects that pollinate and feed the earth. “Black reflects on the inevitable impact on plant and human life if nothing is done to halt the global disappearance of insects,” insists the multi-disciplinary artist whose practice “relates to the human condition and our place in the natural world.”

Compassion for the animal and avian kingdoms in their rich variety defines the work of Whitney Jade Halsted— reflecting the fact she has a reputation for being “the artist on safari” as she accompanies clients to remote areas of southern Africa, enthralling them with her drawing and photographic skills. She is the co-founder of a private corporation dedicated to conserving wildlife in the lower Zambezi. 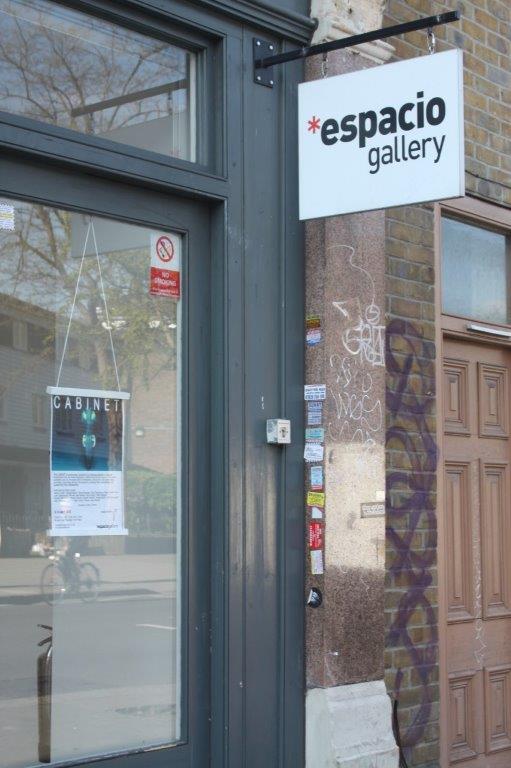 Whitney studied special effects sculpting and prosthetics in Auckland, New Zealand, before studying fine art at the Ruth Prowse School of Art in Cape Town. She is completing her MFA at Wimbledon College of Arts, University of the Arts London.

Since 2012 Whitney has exhibited in Cape Town and Zimbabwe and has contributed to private collectors in South Africa, Zimbabwe, the United States, Argentina, Pakistan and New Zealand.

Kelly is “seduced by the otherworldly and the idea that we can exist as something other than what we are. It is the realm of harlequins, voodoo and orchid-beings” (the website wwww.plantlife.org.uk says that the man orchid when in bloom produces a dense pack of yellow-green flowers of a vaguely humanoid shape, giving the impression that numerous man-shaped beings are dangling from its stem. Man-orchids can grow to about a foot in height). That stature is close to the 45 cm average height of The Rascals made by Kelly from recycled material: rags coloured with acrylic, faux fur, ribbon and packaging. There is an echo here of the origins of indigenous ritualistic belief systems. 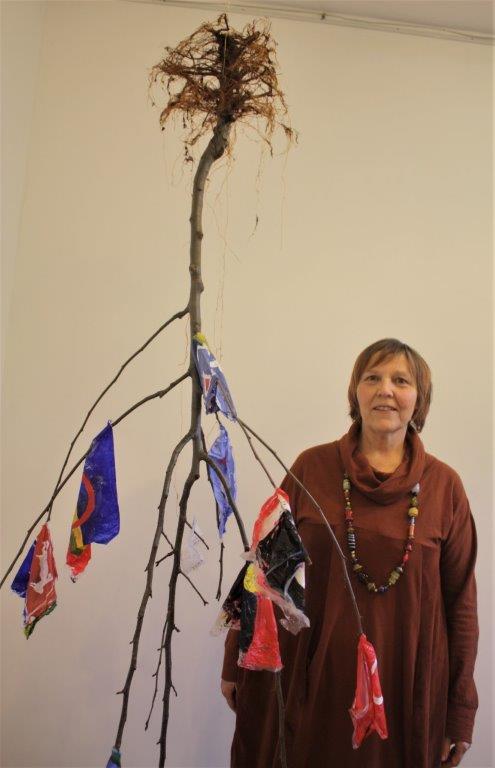 Jenny Timmer with Winds of Time.

She says: “The androgynous Rascals lurk, with a sense of not belonging. The wondrous place of a mystic imagination where these muted creatures speak in fluorescent tongue. A collection of scamps have spawned, humming with florescence, dirtied and soiled, and they revel in it.”

Since the Espacio show, Kelly has travelled to exhibit at a show in Cheshire and taken part in a film shoot of her work. Micro, from April 19 to May 11 is a group exhibition selected by AIR Gallery of Altrincham. It has more than 100 small works by “rising stars in contemporary art from across the globe.”

AIR Gallery says: “These small-scale pieces are great additions for collectors who are seeking to fill in small spaces and niches in their collection or for those who are just starting out and want to support early career artists.”​ The address is The Warehouse, 30 Grosvenor Road, Altrincham WA14 1LD, a short walk from Navigation Road Metrolink stop, and trains go to Navigation Road station from Manchester Piccadilly and from Chester.

Espacio Gallery, opened in 2012 near the junction of Bethnal Green Road and Brick Lane, is run and funded by artists to help them “share their vision with an audience.”

An asterisk beside captions to photos in this article indicates that it was taken by Suzanne Hennie Tennes, to whom many thanks

Dafne Anghelidis – my priorities as new president of WISTA Argentina