May the Fourth Be ‘Woof’ You

May the Fourth Be ‘Woof’ You

04 May 2019 – Well-known fans of Star Wars, Red Funnel Ferries, has once again marked Star Wars Day on May the fourth by reminding its customers that they operate a dog-friendly service.

Staff at the ferry firm, which operates between Southampton and the Isle of Wight, have dressed up their four-legged friends as a host of Star Wars characters including; Darth Vader, Princess Leia and Obi-Wan Kenobi.

The dogs were privileged to have their photos taken on the Bridge of Red Funnel’s Red Falcon, alongside Captain Ned Tutton and Captain Alice Duncan. 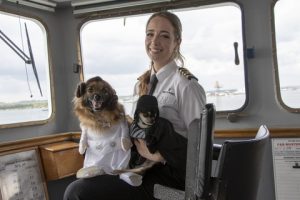 All Red Funnel ferries welcome dogs on-board free of charge and with no need to pre-book or obtain a ticket. Red Osprey, Red Falcon and Red Eagle also offer owners a designated pet lounge, complete with bowls of water and complimentary dog biscuits.

For more information about bringing your dog on-board with Red Funnel, visit: https://www.redfunnel.co.uk/en/isle-of-wight-ferry/dog-friendly-travel/

David Marsh on the fall of German banking, Mark Sobel on IMF quotas, and more