The Seatrade 2019 Awards at London’s Guildhall 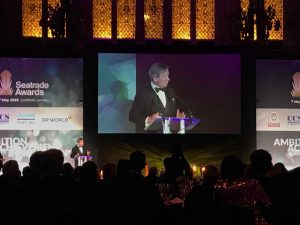 The Seatrade 2019 Awards at London’s Guildhall

Kira Phoenix K’inan was there last night and reports:

It was an absolute pleasure to attend the Seatrade Awards 2019 being the 31st one!

The highlights of the evening were hearing guest of honour Professor Dame Jane Francis speak, Dr Noura Al Dhaheri win Young Person of the Year Award 2019 and for the first time this award has been launched, Integration of Women in the Maritime Sector Award, see Dr Kirsi Tikka win. 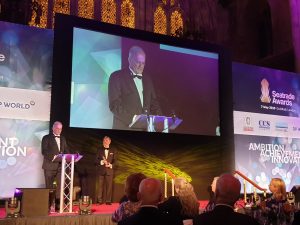 A total of thirteen winners* were announced on the evening,  hosted once again by Bob Jaques, editor, Seatrade Maritime Review!

The main themes of the evening were to bring everyone together in a global initiative to combat the impacts of climate change and to encourage the integration of more women into the business world of shipping. It was therefore important to have Professor Dame Jane Francis, who is the director of the British Antarctic Survey (BAS), speak about her on-going research into the Arctic and Antarctica. She said, ‘change is happening first in the Polar Regions and we are seeing these results around the whole globe.’ Her most recent research is investigating the impact climate change is having on our oceans, as our oceans are absorbing 90% of the extra heat caused by global warming, which means if the oceans were not absorbing this extra heat our atmosphere would be 36 degrees Celsius higher than it currently is. This is a shocking number and really brings home the importance of working together as a global community to improve how we use harness energy, dispose of waste materials and make clear plans for future generations. Professor Dame Jane Francis also spoke about the new icebreaker, the Sir David Attenborough, which contains the state of the art scientific equipment, gliders (including Boaty Mac Boat face) to collect data, a 4 meter moon pool to launch the equipment easily and every effort has been made to create a ship that is a noiseless as possible so as to not disrupt the wild life. 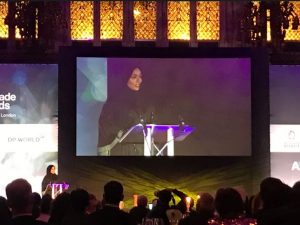 Also speaking was The Rt Hon Chris Graylingn MP. Most notably he spoke about transport infrastructure being a clear way to make positive changes to the global economy, but more to implement the 30 agenda that was previously been discussed at the IMO.

I had the pleasure to meet Eddie Fish and Nathalie Freeman from ExonMobil who were nominated as part of the Digital Technology Award for their Mobil Serv™ Cylinder Condition Monitoring, which detects issues through oil analysis. 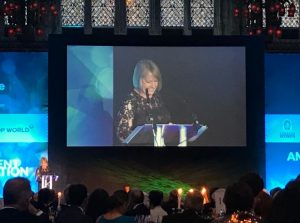 On my table I had the chance to speak to Chris Adams, Head of Key Accounts at Seatrade and the team at HiLo Maritime Risk Management, who were also nominated for the Safety at Sea Award. HiLo was created when from a simple, yet important question, ‘is there anything we can do to predict and prevent shipping accidents.’ HiLo have gathered data from 3800 ships enabling them to predict high impact events for shipping companies. This data translates directly into streamlining processes, and for safety managers to be more efficient, which culminates in saving sailor’s lives. 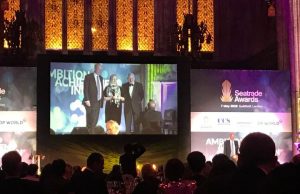 To round up the evening it was inspiring to hear Dr Kirsi Tikka speak after winning the Integration of Women in the Maritime Sector. This award was inspired and supported by the IMO’s World Maritime Day 2019 theme to empower Women in the Maritime Community. Lord Mountevans, chairman Maritime London, president of the Institute of Chartered Shipbrokers,  Chairman of the London International Shipping Week Board of Advisors and amongst he many caps the 688th Lord Mayor of London, was the winner of the Lifetime Award and John Platsidakis, Honorary Chairman of INTERCARGO, Director of Angelicoussis Shipping Group Ltd, Managing Director of Maran Dry Management Inc and a friend of All About Shipping, won Personality of the Year 2019. 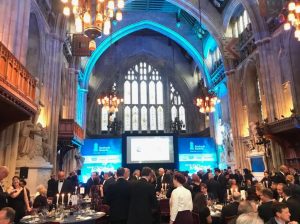 A view from the Seatrade Awards

Huge congratulations to everyone who was nominated and won. All very well deserved.

In conclusion, it was a brilliant night full of discussion on how best to work together as a global industry, bring more innovative solution to the shipping industry, include more diversity and work together to solve the impending issue of Climate Change.

Congratulations  to the entire Seatrade team for a unique event!

Deal of the Year: Reed Smith

Daily Overview of Global Markets & the SEE Region (Wednesday, 8 May, 2019)