Supreme Court was right in its ruling on ‘Rule F’ controversy, Association of Average Adjusters annual meeting is told. 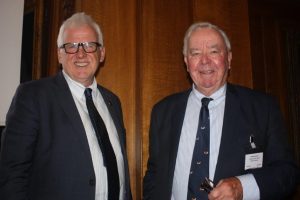 Supreme Court was right in its ruling on ‘Rule F’ controversy, Association of Average Adjusters annual meeting is told

A senior figure in the judiciary has defended a controversial Supreme Court ruling, to which he was party, which upheld a shipowner’s contention that wages and fuel costs incurred during ransom negotiation were allowable under Rule F of the York-Antwerp Rules 1974. The internationally agreed set of rules is designed to achieve uniformity over what falls within the principle of general average and how losses should be shared.

The chemical tanker Longchamp was hijacked in January 2009 and ordered to sail to Somalia. The Supreme Court accepted that the daily expenses should be allowed in general average and therefore shared proportionately between ship and cargo interests, rather than being borne solely by the shipowners – as it took seven weeks of negotiation with the pirates to get the initial ransom demand of $6m reduced substantially to $1.85m.

Delivering the address at the May 9, 2019, annual general meeting of the Association of Average Adjusters, Lord Clarke of Stone-cum-Ebony was adamant that the highest civil court in the land had taken the correct course, and that the existing understanding of adjusters and industry bodies was incorrect.

Although losses by delay are normally excluded by the York-Antwerp Rules and this detention by pirates fell outside the limited circumstances in which wages and fuel costs are normally allowable, the Supreme Court held that the shipowners were entitled to rely on Rule F relating to substituted expenses.  By incurring such costs during a delay for negotiation a significant reduction in the ransom payable by ship and cargo was achieved.  The normal exclusions in the York-Antwerp Rules relating to delay and financial losses had no relevance when Rule F was used as a basis for the allowance.

Questions from the floor indicated concerns that removing any restriction regarding expenses arising from delay in the context of Rule F had created a potential uncertainty as to what other types of expense might now be considered – for example, could allowances extend to ship management and insurance costs or increased warehousing costs for cargo?

Robin Aggersbury, the author of the original Longchamp general average adjustment welcomed the decision, saying that he had always felt it was clearly equitable that the shipowner should be compensated for the direct costs of fuel and wages during a negotiation period.  However, he expressed concern that more indirect expenses might now be considered under the rationale adopted by the Supreme Court.

Tony Brain, chairman of the Association of Average Adjusters of the United States and Canada said that although the Supreme Court ruling might be considered settled law, the questions from the floor “show that maybe it is not all settled.”

Lord Clarke retired from the Supreme Court in October 2017 shortly after participating in the majority decision on the Longchamp and is channelling his energies into commercial arbitration.

An honorary Fellow of the Association of Average Adjusters, Lord Clarke was speaking at the start of the association’s 150th anniversary year.

“They described themselves variously in directories as merchants, accountants, insurance brokers, solicitors or arbitrators.  Not until 1840 did the Post Office London Directory give a classified entry for the profession.”

The first formal association of individual average adjusters practising in the UK was initiated in 1869, at the prompting of the underwriting members of Lloyd’s and the Liverpool Underwriters Association.

Uncertainty and inconsistency in points of practice meant a danger that the profession would fall into disrepute, and the association’s first task in 1869 was to determine how the various ‘customs’ could be brought together into a uniform, if not universal, practice.

Members of the association took a leading role in the search for international uniformity in the adjustment of general average which resulted in the first York-Antwerp Rules of 1877. Members continued to be prominent in the evolution of the rules.  “The association has always played an important part in various London market committees, and… has strong relationships with International associations and insurance markets,” said Lord Clarke.

While the association started in the UK, it had become far more international and was spread around the world in the US, Japan, Greece, Cyprus, Hong Kong, Singapore, Australia, New Zealand and elsewhere.