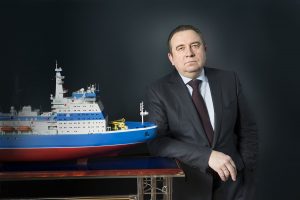 In his interview with IAA PortNews on the World Hydrography Day, Aleksey Rakhmanov, President of United Shipbuilding Corporation, tells about ‘blue economy’, hydrographic science, construction of the research fleet and the North Pole platform.

– Mr. Rakhmanov, the World Hydrography Day is celebrated on June 21. Do shipbuilders associate themselves with it?

– Hydrographic knowledge ensures safe shipping. The countries possessing river or sea fleet have a hydrographic service as well. But the fleet does not appear on its own – it is created by shipbuilders. So we are naturally connected.

By the way, the hydrographic science and service was born in our country almost simultaneously with the fleet – in the times of Peter the Great. The records of national shipbuilding have been kept from the day when Tsar Aleksey, farther of Peter, signed the order on construction of the Oryol frigate. The ship built near Moscow, in Dedinovo, celebrates its 350th anniversary since its maiden voyage. There is every reason to believe that Russia’s tricoloured flag was initially hoisted on the Oryol – the archives contain records confirming that fabric of three colours, red, white and blue, was provided for the ‘banners’. You see how everything is interconnected.

July is a month quite related to the sea: the World Oceans Day was celebrated on the 8th, today is the World Hydrography Day while the 29th of June is the day of signing the order for construction of the Oryol celebrated as the Shipbuilder’s Day. 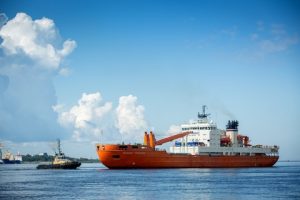 -That’s the idea. And we have twice held a panel discussion dedicated to the research and resources of the Global Ocean at the St. Petersburg International Economic Forum. Lots of prominent experts and business representatives were speaking at the session. What is crucial, Vladimir Ryabinin, Executive Secretary of the Intergovernmental Oceanographic Commission (IOC-UNESCO) had sent his video message to the participants.

Vladimir Ryabinin share figures speaking for themselves: “Blue economy or the Global Ocean economy exceeds $3 trillion and it is more stable than the land economy. However, the ocean research financing is about $1 billion which is 3,000 times less than the value of the generated product”. He told about the coming Decade of Ocean Sciences proclaimed by the United Nations for 2021-2030 and emphasized that the mankind should unite for the Global Ocean research and protection.

I would specially emphasize that the Global Ocean issues were covered yesterday at the Direct Line with Vladimir Putin, especially in the part of ecology. I am sure, the interest to all these topics will just increase worldwide. 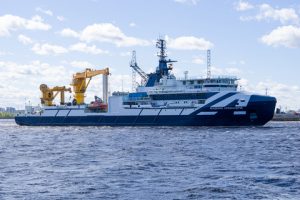 – Together with the Global Ocean Museum, you have recently held an expert session in Kaliningrad. What was discussed there?

– The year of 2019 was proclaimed by USC a Year of Science and we have held quite a few events related to fundamental and applied science in one form or another.

A wide array of issues was discussed at the expert session in Kaliningrad – from the Global Ocean ecology to the future shape and equipment of research ships. It’s perfectly clear to everyone that the high seas are underexplored and our research fleet needs comprehensive renovation. We told the scientists about our promising projects on construction of research ships and we will proceed togeher.

Besides, together with the Global Ocean Museum and State TV and Radio Broadcasting Company “Kaliningrad” we embarked on an interesting cultural and educational TV project “Comprehensible Science”. It is a series of short documentary films ab specific features of ship designs, scientific research of the Global Ocean and other spheres of activities related to shipbuilding.

– That is very exciting, but how does the construction of research fleet and other marine facilities proceed?

– Today, two oceanographic ships are under construction: at the Baltic Shipyard “Yantar” and Severodvinsk based Zvezdochka shipyard. The concepts for a range of research ships of ‘tomorrow’ are under development. Among them is a large Arctic research ship and multipurpose research ship for geological exploration in the high seas.

I would also like to mention a unique project being implemented by the Admiralteiskie Verfi shipyard – an ice-resistant self-propelled platform, the North Pole. That will be a floating observation facility for scientific research and environmental monitoring. Its construction is aimed at reinforcement of Russia’s presence in the Arctic and strengthening of its positions as a global polar science leader.

By the way, the motto of the World Hydrography Day is “Hydrographic information driving marine knowledge”. That’s the idea: we would know little about the Global Ocean without the hydrographic science. Any fleet – both civil and military one – needs it. And I take an opportunity to congratulate all those related to this significant part of marine knowledge: scientists, engineers, masters, navigators, etc. I also congratulate my colleagues, shipbuilders, who will soon celebrate their professional holiday. I wish them sound health, wellbeing and professional success.

With NEOLINE, the Michelin Group’s logistics is on...