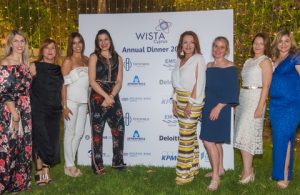 WISTA Cyprus (Women’s International Shipping and Trading Association), held its’ annual dinner on Friday, 7th June, 2019, welcoming in excess 125 members and friends from the domestic shipping industry. The dinner was held in a magical summer setting by the beach, on the grounds of Atlantica Bay “The Sands,” located on the Limassol coastline.

In a short address, the Cyprus Shipping Deputy Minister Mrs Natasa Pilides, an active WISTA Cyprus member herself, in her opening address made reference to the achievements of WISTA and its members over the years, with particular mention to the association acquiring consultative status with the International Maritime Association (IMO). Mrs. Pilides, congratulated WISTA Cyprus for becoming one of the largest and more active national WISTA associations’ (NWAs) worldwide, and reiterated the Deputy Ministry’s support to its work.

Following the address by the Shipping Deputy Minister, WISTA Cyprus President Mrs Anna Vourgos welcomed Mrs Dora Choraitou, of Europa Donna Cyprus, inviting her to receive the donation made on behalf of the Association, following tradition. In continuous support of Europa Donna’s cause, earlier in the year, WISTA Cyprus joined forces with the Shipping Deputy Ministry, participating in the Limassol marathon supporting the organisation.

It is worth noting that the Cyprus Shipping Chamber was represented at the dinner by the Deputy Director General/Marine Manager, while on behalf of the Cyprus Union of Shipowners, the association’s Public Relations Officer attended.

WISTA is an International Networking Association of women at management level positions in the Shipping industry, all sharing the same passion – Shipping!

Initially created in 1974, today it counts 40 plus NWA’s and more than 3000 members and it’s aims is to:
• Minimizing the existing gender leadership gap in the maritime, trading and logistics sectors.
• Building a community among its members, facilitating the exchange of contacts, information, and experiences
• Promoting the creation of business relationships among its members
• Facilitating the professional development of its members
• Providing liaison with other related institutions and organizations worldwide

More info on WISTA Cyprus are available at: