Bruce A. Fenimore to Receive 2019 Connie Award in Newark, NJ Sara Mayes to Be Honored with the Lifetime Achievement Award 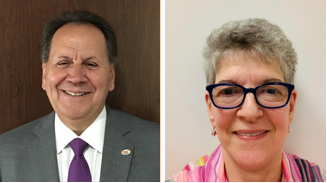 Bruce A. Fenimore to Receive 2019 Connie Award in Newark, NJ Sara Mayes to Be Honored with the Lifetime Achievement Award

Luncheon to be held December 9, 2019 at the Renaissance Newark Airport Hotel
CRANFORD, NJ, August 5, 2019– Bruce A. Fenimore, Chief Executive Officer of Columbia Group, will receive the 2019 Connie Award presented by the Containerization & Intermodal Institute (CII) on December 9. The industry-wide event to honor Mr. Fenimore will be held at the Renaissance Newark Airport Hotel.
Mr. Fenimore is the visionary behind the growth and expansion of Columbia Group, which has earned a reputation as a leader in inland transport and equipment, primarily as it relates to expanding its US-flag barge fleet.
In addition, Sara Mayes, President and CEO of Gemini Shippers Group and an industry veteran with 50+ years in the business, will be presented with the Lifetime Achievement Award.
CII conducted an industry-wide poll, which yielded significant support for Mr. Fenimore. CII President Michael DiVirgilio announced the award recipients today with the following statement: “Mr. Fenimore has proven himself a visionary with the confidence to make bold moves that have helped shape our industry.”
Mr. Fenimore has more than 40 years of experience in the ocean freight and logistics industry. He has spent most of his career holding multiple leadership positions at the Columbia Group. He began his tenure with the company as President of Columbia Coastal Transport, where his expansion of the US-flag barge fleet earned it the reputation as a leader in containerized cargo feeder services and the provider of the most environmentally sustainable mode of container transportation available in the market. Further strengthening the company’s position, Mr. Fenimore was instrumental in acquiring a depot operator, renamed Columbia Container Services, and was the visionary behind the launch of Columbia Intermodal, a trucking and leasing division.
Mr. Fenimore also had the foresight to anticipate the return to container-on-barge services due to the larger vessels calling fewer points, so Columbia built the Columbia Freedom a state-of-the-art 910 TEU container barge.   On the landside, Columbia has experienced exponential growth including the opening of the Bayonne Chassis Depot, operating the chassis pool in the Port of Boston, relocating the Maher Terminal empty container depot into the Port of New York and New Jersey, and opening of the Elizabeth Chassis Depot.
In 2018, Mr. Fenimore became the sole owner of the Columbia Group, LLC and its operating companies. He also currently serves on the Board of Directors of the Metropolitan Marine Maintenance Contractors’ Association.
Before becoming President and CEO of Gemini Shippers Group, Sara Mayes served as president, a volunteer position, for the newly formed Fashion Accessories Shippers Association (FASA) for more than a decade. Ms. Mayes played a pivotal role in the formation and evolution of the shipper’s association model which was first approved after the passing of the 1984 Shipping Act. FASA began doing business as Gemini Shippers Group, and in the early 2000s, Ms. Mayes shifted from volunteer to senior management and took on the role of leading the organization into the future.
Under Ms. Mayes’ leadership, Gemini quickly rose to be a leader in the fashion accessories and garment import category.   Volumes and membership more than quadrupled and, today, Gemini Shippers Group serves over 250 member companies, covering all commodities. Ms. Mayes has differentiated Gemini as the most technologically innovative shippers’ association in the United States.
Ms. Mayes serves on the Board of Directors of the International Trade and Marketing Department of the Fashion Institute of Technology and has been a regular speaker and contributor to many publications and trade events.  She has also served our country as a participant on the U.S. Commerce Department’s industry advisory committees during her career.
CII, founded in 1960, has been presenting the Connie Award since 1972 and it has become the most coveted honor in the field of containerization and its ancillary industries. Among some 65 recipients to date are Malcom McLean, James McKenna, Ed DeNike, John Wolfe, Richard Steinke, Helen Bentley, Captain S.Y. Kuo, Matthew Cox and Robert Pfeiffer.
At the event, CII will carry out its industry education mission by presenting scholarships to students studying logistics as well as the institutions that are educating our future leaders. Under its auspices, CII has awarded nearly $1 million toward scholarships. Companies have the opportunity to support ongoing industry education by purchasing scholarships through CII, starting at $1,000. To learn more about funding a 2019 named scholarship for your organization, please call CII Executive Director, Lisa Aurichio at 917-476-8366 or email info@containerization.org.
The CII Connie Awards luncheon is $250 per ticket and seating is limited. Sponsorships for event and tickets are available here. For more information, you can contact Lisa Aurichio, Executive Director at 917-476-8366 or lisa@bsya.com, and staff at (732) 817-9131 or info@containerization.org.
2019 Connie AwardColumbia GroupContainerization & Intermodal InstituteGemini Shippers GroupRenaissance Newark Airport HotelUSA
0 comment
0
FacebookTwitterLinkedinEmail

A fifth of UK companies report difficulty onboarding their 3PL