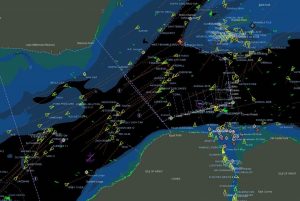 ABP Southampton is preparing for the challenge of managing all of the traffic that will flow through the port during this year’s Cowes Week, which will see up to 8,000 competitors and 800 boats out on the water from 10 to 17 August.
The Regatta stages up to 40 daily races for around 800 boats across the event and is the largest sailing regatta of its kind in the world. During this sporting event the Solent remains open to all of the usual commercial vessels passing through, including bulk, container ships, car carriers, cruise ships, ferries and naval vessels as well as smaller leisure boats.
This year, the event incorporates the SailGP event, the new global sports series, as an official Feature Event of the Regatta across 10 and 11 August.
In the lead up and during Cowes Week each year, ABP Southampton works closely with the Regatta organisers to help ensure this annual event goes without a hitch. The responsibility rests with Captain Phil Buckley, Harbour Master at the Port of Southampton, who works closely with the Queen’s Harbour Master in Portsmouth, and the Cowes Harbour Master, to ensure the safety of all harbour users.
Captain Phil Buckley said: “We’re very experienced in handling large amounts of Cowes Week traffic and our highly professional pilots and experienced marine teams are crucial to these plans.
“Through working together, we can ensure a smooth, safe and enjoyable Cowes Week for everyone on the Solent.”
ABP Southampton will have an active presence both on the water and ashore with race organisers throughout the event. This includes positioning a pilot on the starting platform each day to help coordinate race and commercial traffic. The port will continue to work around the clock to ensure traffic moves smoothly through the Solent.
ABP Southampton is the Statutory Harbour Authority for most of the water between Cowes and Southampton and is one of the busiest ports in the UK. In one year the port sees 10,000 ships and ABP’s Vessel Traffic Service manages around 150,000 traffic moves in the Solent
ABP SouthamptonCowes weekRegattaUnited Kingdom
0 comment
0
FacebookTwitterLinkedinEmail

We are very pleased to announce that Greencarrier is enabling The Ship Götheborg to sail again.