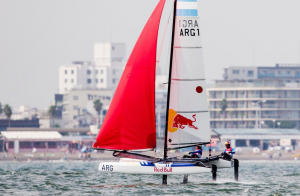 As Ready Steady Tokyo – Sailing, the official test event for Tokyo 2020, reaches its mid-way point, it’s fair to say that all 353 athletes here have been put through their paces so far.

Day 3 produced a different bout of weather to the previous two days, with shifting winds and tricky conditions shaking up the standings somewhat.

The variety of racing scenarios faced by the sailors will provide them with plenty of experience for the Tokyo 2020 Olympic Games in one year’s time; the old regatta adage of “consistency is key” certainly applies here.

One team who have demonstrated this with a typically professional performance so far are reigning Nacra 17 Olympic champions, Santiago Lange and Cecilia Carranza Saroli (ARG).

They won two of today’s four races to move up into second place, also picking up a fourth and a 12th (discarded).