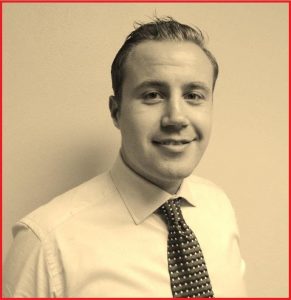 Mikkel Ebdrup has a key role in a company whose motto is “delivering the impossible daily.”
He offers a telling illustration of the scale of the tasks which he and his colleagues organise in the heavy-lift shipment sector.

The equivalent of 17 times the weight of the mighty Statue of Liberty: that was the burden of four project mobilisations of heavy mining equipment he managed over seven months for Airland Logistics, the company for which he is business development manager. The cargo totalled 3,660 tonnes.

Mr Ebdrup for the past two years has been doing some “heavy lifting” of a mental nature, as a participant in the Class of 2019 and now a graduate of the Executive MBA in Shipping and Logistics (the Blue MBA) at Copenhagen Business School. Like his fellow graduates, he found the course demanding but of huge value in terms of building on his practical, strategic and logistical leadership capability. By its part-time nature, the MBA programme, which he describes as exciting as well as exacting, enabled him to pursue his “day job” at the same time.

In the cited mining equipment mobilisation, it was not just the volume of goods handled, it was their variety and the global reach of the project that was testing. The shipments had to be moved from North America, Europe and the Middle East to West Africa. They comprised one telehandler, four trucks, two excavators, six cranes, 10 graders, 16 loaders, 90 light vehicles and 29 dump trucks. 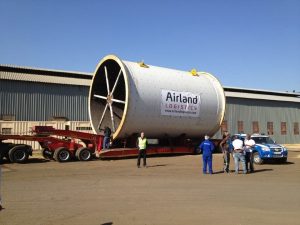 The 15,237 cubic metres of freight was delivered successfully and on schedule.

Mr Ebdrup has been in the logistics and supply chain industry for a dozen years, including two years based in Johannesburg, which saw another of his proudest achievements.

That was another mining infrastructure contract: to ship by chartered vessels a series of ball mill shells from South Africa to Egypt. Ball mills, which grind and blend mineral ore, are filled up to 40% with steel balls, which drop from near the top of a rotating hollow cylindrical shell.

The client was a European engineering, procurement and construction management business specialising in the development, design and construction of prestigious gold mining projects. It was contracted to manage all aspects of a major gold mine upgrade in Egypt. The upgrade included enhancement of on-site crushing capabilities, requiring the import of large ball mills from Johannesburg. Airland was appointed to provide a logistics solution to support the mine’s tight production schedules.

Using resources and expertise from its South African and Middle Eastern offices, Airland formed a project team to plan and manage the movement of 528 tonnes of ball mills to Egypt. Two chartered vessels were immediately commissioned.

With journey of 1,800 km overland to reach the port, special consideration was given to safe freight collection and delivery. Some items measured over 6 m in diameter and weighed up to 105 tonnes. The project team met South African government transport officials to identify a road route from Johannesburg to Richards Bay that could take the massive cargo weights and dimensions without damaging highway and power infrastructure. 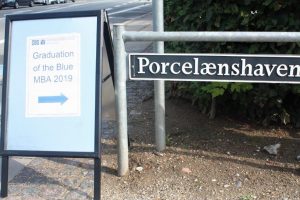 Blue MBA: the way ahead.

Working with the government transport and energy departments, Airland engaged surveyors, power officials, escorts and appropriate vehicles to navigate around overhanging power lines and other roadside obstacles to deliver the abnormal load.

It took some two weeks to get the load from factory to quayside because truck speed had to be limited to a maximum 20 km per hour for safety.

A separate storage area was provided portside for Airland to consolidate the shells and ancillary equipment from various suppliers. Independent maritime surveyors were engaged to ensure the loading and lashing of the equipment complied with client directions and marine insurance policies.

Mr Ebdrup has since 2013 been business development manager at Airland’s Copenhagen base, responsible for the general operation, customer service, sales and economy of the sea freight department. He is key account manager on current projects for the mining and oil and gas sectors.

Airland is a privately-owned freight forwarding and project logistics provider established in 1975, with capability of “delivering the impossible daily.” The company says that it paved the way for freight forwarding in Africa, having long provided logistics services to mining and infrastructure projects and supported crisis response by non-governmental organisations.

Mr Ebdrup joined Airland after a career in heavy-lift and breakbulk shipping as agent for shipping lines Wallenius Wilhelmsen, Eukor Car Carriers, Fednav and Grimaldi Lines (he had begun as a shipping trainee at Motorships Agencies A/S, Copenhagen). He had quickly learned to find imaginative ways of transporting oversized and out-of-gauge machinery and equipment. Many of his current clients operate in remote and challenging areas.

Joining Airland, he spent two years focusing on sea freight export and cross-trade “from A-Z” mainly in the aid and relief sector and the mining industry including movement of vehicles, containers, drill rigs and other rolling over-dimensioned, out-of-gauge machinery and breakbulk cargo to many African destinations.

During his time in the group’s Johannesburg office, he controlled accounts covering air freight, road transport and sea freight including part- and full-chartering to and from West, East and Sub-Saharan Africa. In addition to the maritime side he was introduced to airfreight. “It was important to master all modes of transport as I was the front figure both in terms of sales and operation, and therefore it meant I had to take the occasional hand-carrier trip to Zambia and Tanzania to bring urgent spare parts through to mine sites.”

He returned to headquarters in the Danish capital to take on leadership of the sea freight department and to handle some of the group’s largest accounts. He says: “It is always exciting going abroad to supervise the loading of project shipments – to be the eyes and ears on the ground, making things happen and being part of the planning side from a very close distance – this has taken me around the world to interesting places.”

There are visits to specialist gatherings including as company representative at the annual membership conference of the Worldwide Project Consortium, a project network which yields important insights into what is trending in the industry.

Mr Ebdrup says that supply chain management is a natural progression in freight forwarding for industries including mining, which has been hit by declines in natural resources values since the global mining boom ended in 2013. Optimisation of supply chains is more critical than ever to minimise costs.

Airland says it is building on the traditional freight forwarder relationship by providing clients with a transparent supply chain solution aligned to their business strategy. The company states: “We don’t just move cargo, we support your financial and operational targets, partnering with you throughout all stages of the shipment lifecycle.”

It serves the logistics needs of organisations in a wide range of sectors: automotive, heavy equipment, project cargo, mining and infrastructure, oil, gas and energy, drilling, consumer and retail goods, industrial and manufacturing. This is supported by a strategic network of offices, hubs and partners in many countries.

The company’s status is enhanced by its TRACE certification, an international symbol that it has met globally accepted commercial practices, reflecting its commitment to combat bribery and corruption through a culture of transparency, ongoing training and risk assessment.

Airland’s Denmark operations were in 2016 awarded Authorised Economic Operator certification to AEOF status which relates both to Customs simplification and to security and safety. This is an important factor in streamlining Customs facilitation for the company’s customers.