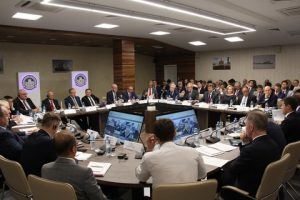 On 4 September 2019, the first working meeting of the Northern Sea Route (NSR) Public Council was held in Vladivostok at the 5th Eastern Economic Forum.

It was attended by: the СEO of Rosatom, Aleksey Likhachev; the President and CEO of Sovcomflot, Sergey Frank; Governor of the Yamalo-Nenetsky autonomous region, Dmitry Artyukhov; Deputy Minister of Transport of Russia – Head of the Federal Agency for Maritime and River Transport, Yury Tsvetkov; the Special envoy for International Cooperation in the Arctic of the Ministry of Foreign Affairs of Russia, Nikolai Korchunov; Deputy Director General of Rosatom and Director of NSR Directorate, Vyacheslav Ruksha, President at United Shipbuilding Corporation, Aleksey Rakhmanov; Total Country Chair Russia, Arnaud le Fall; Managing Director of Stena Bulk AB, Mats Karlsson; Managing Director of Aker Arctic Technology, Reko-Antti Suojanen; Chairman of the Tschudi Shipping Company AS, Felix Tschudi and others.

“Under the auspices of the federal “Northern Sea Route” project we have made the necessary arrangements to reach a target annual traffic of 80 million tonnes along the NSR by 2024. This requires the development of infrastructure, including the Arctic icebreaker fleet, satellite communications, accident prevention measures, port fleet and digital services for shipping. We will be able to meet these challenges together, only with the involvement of all the Council participants: charterers; shipping companies; scientific and project organisations; business representatives and the authorities,” – said Aleksey Likhachev addressing the meeting.

In his speech Sergey Frank, President and CEO of Sovcomflot noted:

“Maritime transportation along the NSR has to be carried out in full compliance with the highest safety and quality standards, with the focus on the environment. In 2018, freight traffic along the NSR almost doubled to 19.7 million tonnes, in comparison with 2017. There is no doubt that the significant growth in NSR traffic pushes the human element to the fore, where the quality of marine specialists will be crucial to ensure safe shipping. In this light, the arrangement of the Public Council, within the walls of one of the oldest maritime universities in Russia – Nevelskoy State Maritime University – is especially symbolic.”

The inaugural meeting of the NSR Public Council was held in June 2019, in St. Petersburg. The Council includes representatives from resource and shipping companies, scientific and design organisations, the insurance industry, marine registers, and government bodies.

Over 40% of Maritime Businesses Failing to Fund Training