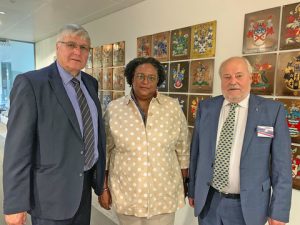 A leading Caribbean Prime Minister has told of the ‘horrors’ of Hurricane Dorian on a UK visit for the launch of a disaster relief ships.

She attended the launch at the UK Chamber of Shipping during London International Shipping Week.

Ms Mottley told the 80-strong room that Hurricane Dorian had ‘reaped absolute horror upon the Bahamas’.

She added: “This hurricane sat on the Bahamas for 36 hours.

“Everyone who described what they endured said that it was like having a thousand sledgehammers working at you every minute of every hour for 36 hours, not to mention the impact of the storm surge.”

She warned that the Caribbean still faced more than 90 days of the hurricane season until the end of November – and that such a vessel was urgently needed.

Ms Mottley, who was en route to give the prestigious Raul Prebisch Lecture at the UN European headquarters in Geneva, called for a collective approach to tackle the crisis.

“There is no doubt in my mind that Britannia Maritime Aid’s endeavour is absolutely necessary for the region and caused me to reflect the absolute importance of collective partnership across the global community.

“We do not generate the activity that has led to climate change.

“We are simply however on the front line of the battle. We are continuously reminded that our value is compromised by a world that is prepared to countenance a change temperature of two degrees or more when we need 1.5 degrees to survive.

“It means that we will continue to be on the front line on an annual basis.”

Now UK-based BMA has urgently stepped up its plans to commission a suitable ship as an interim vessel to provide support as soon as possible in the Caribbean.

In the long-term its purpose-built vessels will be able to carry significantly more humanitarian aid and disaster relief equipment than present vessels from the Royal Navy or Royal Fleet Auxiliary – including food, water, medicine, field hospitals, emergency shelter – and will have helicopters, drones and landing craft.

When not engaged in disaster relief and humanitarian aid, the vessels will provide training for sea cadets and associated trade apprentices and engage in such ocean advocacy as plastic clean-ups.

“We could start tomorrow if we had an interim ship and funding in place. Our ships will not only save lives, they could also save our Government money, revitalise shipbuilding and give the next generation of seafarers the very best training in the world.”

BMA has launched a crowdfunding page to help fund an initial a business case. It has already been backed by major maritime and political figures.

Its chief executive Tony Graham spoke at the BMA launch at the UK Chamber of Shipping.