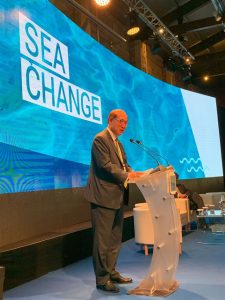 CYPRUS, October 7, 2019: Today marked the opening of the internationally renowned “Maritime Cyprus 2019” Conference at the “Carob Mill Conference Centre” in Limassol. Organised in partnership by the Cyprus Shipping Deputy Ministry, the Cyprus Shipping Chamber, and the Cyprus Union of Shipowners, this year’s conference themed “Sea Change” is attended by distinguished speakers and more than 900 shipping professionals from around the world. The Conference, organised biennially in Cyprus, is taking place this year for the sixteenth time since 1989, celebrating its 30 year anniversary since inception.

Mr. Costas Iacovou, Permanent Secretary of the Shipping Deputy Ministry provided a welcome address to today´s conference participants. This was followed by the President of the Republic of Cyprus, Mr. Nicos Anastasiades who delivered the opening address, referring to the new initiatives of the Shipping Deputy Ministry that have already yielded positive results in tangibly improving the Cyprus shipping administration. The President emphasised these initiatives have already led to an increase in the revenues from ship management companies as well as to the gross tonnage of the Cyprus Ship Register. The President of the Republic announced the introduction of an updated pricing policy simplifying the fees relating to the Cyprus Registry of Ships, and abolishing initial registration fees for ocean-going vessels.

H.E. Mrs. Violeta Bulc, Commissioner for Transport, European Commission, then addressed the conference via video link, in which she highlighted the collaborative efforts achieved over the past five years to make maritime transport safer, cleaner and more connected. A discussion followed on “Regulatory measures: a product of necessity or pressure?”, which was moderated by Mr. Bob Jaques, editor, Seatrade Maritime Review.

H.E. Mr. Kitack Lim, Secretary General of the IMO participated in the panel discussion alongside Ms Magda Kopczynska, Director for Waterborne Transport, Directorate-General for Mobility and Transport at the European Commission and Mr. Esben Poulsson, Chairman of the International Chamber of Shipping. The panel stressed the importance of collaboration and cooperation throughout the shipping industry, and adoption of technology to increase connectivity and productivity. It was suggested that decarbonisation is driving the industry’s 4th propulsion revolution and was urged to act now, or be at the mercy of forces that we may not be able to control. Attendees were reminded that the emissions impact of shipping has put pressure on both regulators and the industry to act. There was universal agreement that regional regulations should be avoided to ensure the industry maintains global rules for a global industry.

Ms. Natasa Pilides, Cyprus Shipping Deputy Minister to the President discussed change and opportunity within the industry with Ms K D Adamson, Futurist & CEO, Futurenautics Group, highlighting the potential of blue growth, the importance of diversity and inclusion, and the prospects for digitalisation. They both agreed on the importance of blue growth, and using the current visibility of the shipping industry in the public sphere to create positive momentum for change, highlighting the efforts made to become a safer, greener, smarter, and more inclusive industry.

The second panel discussion explored “Shipowners: The new landscape”, moderated by Mr. George Mouskas, Vice President of the Cyprus Union of Shipowners. The panel included Mr. Andreas Hadjiyiannis, President of the Cyprus Union of Shipowners, Mr. George Procopiou, Chairman of Dynacom Tankers Management Ltd, Ms. Angeliki Frangou, Chairwoman & CEO of Navios Group, and Mr Polys Hajioannou, CEO, Safe Bulkers Inc. The discussion focused on four main topics; emissions, the importance of shipping to Europe, freight markets and trade wars, and public shipping companies. While some panelists were vehement in their support for reducing speed to achieve emissions reductions immediately, others suggested that we should learn from the technology adopted in other industries and believed that shipping’s future will see a combination of emissions reductions initiatives to achieve its goals.

The day’s third and final panel considered “Are there brighter days ahead for Shipping?”. Mr. Mark Williams, Managing Director of Shipping Strategy Ltd was the moderator for this discussion with the panel comprising Ms. Sadan Kaptanoglu, Chairwoman of Kaptanoglu Group and BIMCO President, Mr. Mikael Skov, CEO of Hafnia PTE Ltd, Mr. Ben Nolan, Managing Director of Maritime & Energy Infrastructure Research, Stifel Financial Corp, Mr. Philippos Philis, President of Cyprus Shipping Chamber, and Mr. Thomas Rehder, Managing Partner of Carsten Rehder Schiffsmalker and Reederei GMBH & Co. KG. It was suggested that shipping is in a game-changing era of transformation, with key drivers being decarbonisation and digitalisation. Panelists underlined shipowners’ widespread commitment to improving the industry’s impact on the environment and suggested that the perception of shipowners can often be unjust. The importance of people and attracting talent was also emphasised, with acknowledgement that the younger generation wants to see a clear direction for the application of environmental measures otherwise they will pursue careers in other industries.