Some Reflections of Dr Sheppard* from Maritime Cyprus 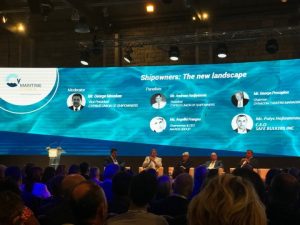 Some Reflections of Dr Sheppard* from Maritime Cyprus

‘SEA CHANGE’ was the theme.

Undoubtedly the organisers captured the mood and felt the pulse of a surge of awareness, an urge for a holistic evolution, or is it not a revolution, considering what has been happening on the streets of capital cities around the world, where the voices of young and old are made loudly clear for a change in the behaviour of big organisations and governments?

So, the theme is inextricably interconnected with the wider issues concerning the way we think about the environment and not just the sea. There is a profound, or notable transformation, a paradigm shift, that has emerged, gradually, but has become evident particularly during this year.

Worrying shipowners are, as it was expressed at the conference, concerned about how they are going to cope with the speed things are moving. The IMO sulphur 2020 Regulation, which comes into force on 1 January 2020, provides that the limit for sulfur in fuel oil used on board ships operating outside designated emission control areas will be reduced to 0.50 percent (mass by mass). It is being cut dramatically from 3.5% in 2008 to 0.5% in 2020. Alternatively, the regulations allow ship operators to fit scrubbers, which spray alkaline water over exhaust emissions, capturing sulphur oxides.

Scrubber systems (air pollution control devices) are needed to be installed, or new ships with suitable new engines to be ordered, and Mr Procopiou questioned why the IMO did not consider how the shipping industry will have time to have their ships ready by tomorrow?

The challenge these regulations pose to the industry is significant. Many shipowners are not ready and are racing to achieve compliance by the end of the year; to switch to low sulphur emissions is proving costly and the installation of scrubbers costs between $5m and $10m per ship. The IMO 2020 regulation has been regarded as the most disruptive change impacting upon the shipping and oil industries in the last 30 years! and there is no opting out!

IMO Marine Engine Regulations on energy efficiency generally support the demand for ever greener and cleaner shipping. Powerful engines are needed to propel a ship through the sea. A ship which is more energy efficient, or is steaming slowly, burns less fuel, so it emits less air pollution.

Interesting to hear at the conference from innovators that they are proposing alternatives to fuel, such as LNG until other innovators find something else. However, although ships transport most of the goods around the world, when one looks at the relative energy efficiency of different modes of transport, ships are by far the most energy efficient.

But no doubt, pressure is exerted on other modes of industries, not just shipping. There is a ‘Sea Change’ or a ‘Big Bang’ regarding all materials or products that are used by industries, even by those seemingly ‘innocuous’ industries such as designers, artists, fashion!

And just look at the most effective message delivered by Interorient Shipmanagment which handed out at the conference special paper bags with the writing on it: ‘Say No to Plastic Bags’ 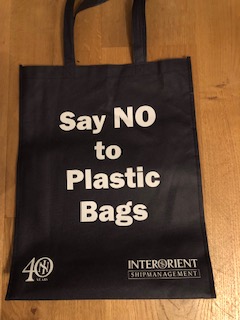 There is indeed a paradigm shift in attitude, and we are not short of young innovators who drive the change to save the earth from a possible danger of being sucked in by the sun or sunk by swampy floods caused by melting ice.