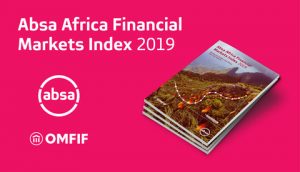 South Africa retains the top position due to its sizeable lead in Pillar 1, ‘market depth’. While it is likely to remain an outlier in this pillar, the creation of new bourses and key mergers between existing ones will improve the standing of other countries in coming years. This year, Botswana, Kenya and Namibia join the ranks of countries that score more than 50 in Pillar 1, indicating a deepening of individual markets.

Other countries are catching up in the rest of the index. Egypt has the highest score in ‘macroeconomic opportunity’, while Mauritius and Kenya claim the two top spots in ‘legality and enforceability of standard financial markets master agreements’. Ethiopia, although lagging behind, has significant potential for improvement in the coming year. It has announced plans to establish a stock exchange in 2020.

‘The steady improvement across African countries is partly a testament to the impact of our index across the continent,’ says George Asante, head of global markets for Absa regional operations.

‘There has been a concerted effort among African policy-makers to react to the findings. This can be seen in the vast improvements in Pillar 6, ‘legality and enforceability of standard financial markets master agreements’, where countries have responded to past findings in order to align with best practice. The index is becoming a powerful barometer for policy-makers and playing a role in building an Africa which is able to fund itself.’

‘As a business with strong pan-African aspirations, we are constantly trying to find ways to facilitate and encourage progress in the region. We are excited about the impact the index is having on African financial markets. We believe in the power of thought leadership and insights to help strengthen the region and build stronger and more robust financial markets,’ says Charles Russon, chief executive officer at Absa Corporate and Investment Banking.

The improvements outlined in the third Absa Africa Financial Markets Index underline significant progress across Africa’s financial markets. The first edition in 2017 shed light on the disadvantages of rigid foreign exchange regimes, which handicapped investors and constrained countries’ ability to deal with global developments. Subsequently, many countries have moved to more flexible exchange rates, improving their policy responsiveness and shock absorption capability. Similar positive changes can be seen in growing consciousness of the importance of local investors and improvements in the transparency and availability of market data.

‘We welcome these vital signs of improvement in several African countries,’ says David Marsh, chairman of OMFIF. ‘New products like the world’s first sovereign blue bond issued by the Seychelles, or regulatory improvements in Mauritius and Ghana, prove that the African continent is moving in the right direction. The index is now a piece of important evidence for tracking progress in the region.’

‘The Africa Financial Markets Index has helped our country design its reform plans with a view to promoting macroeconomic stability,’ says Akiules Neto, executive director and board member at the Angola Securities Exchange.