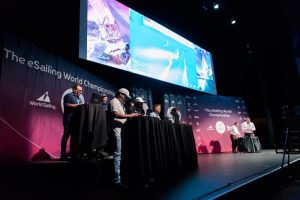 The top eight eSailors will battle it out to be crowned the 2019 eSailing World Champion at the Championship Final on Tuesday 29 October at the Southampton Fairmont Hotel, Bermuda.

The second edition of the eSailing World Championship comes following an extensive series that began in January. Held from 14:00 – 14:30 local time on 29 October, the final will be live streamed across World Sailing’s YouTube and Facebook.

Who made the final?

Five different nations will compete at the 2019 eSailing World Championship Final with Australia and the Netherlands represented live for the first time.

The first spot in the final was awarded to HAVUC from Turkey who currently holds 905 points in the worldwide ranking. Joining HAVUC in the 2019 eSailing World Championship Final are:

At the inaugural eSailing World Championship Final in 2018, L1 of France was crowned the champion in a winner-takes-all final race. He returns to defend the title and comes in as the fifth best player in the world.

LaMerNoire, also from France, was world number one heading into the 2018 Final so will be looking to take the title this year.

2019 will see the youngest ever eSailor qualify for the final. At just 16-years-old Italy’s SNPJ Luca 56124 booked his ticket to Bermuda, highlighting how eSailing allows the entire sailing community to compete against each other throughout the season – regardless of age, location and sailing experience.

The intricacies of sailing are perfectly captured on the Virtual Regatta Inshore Game, the leading digital sailing platform that hosts the eSailing World Championship and real life, leading sailors regularly race. Bart Lambriex (NED), world #22 in the 49er, has also qualified. In 2019, the Dutch sailor has raced at Hempel World Cup Series events in Miami and Genoa as well as Kieler Woche. In 2018 he raced at the Aarhus Hempel Sailing World Championships and is touted as a future Olympian.

Launched on 22 January 2019 at boot Düsseldorf in Germany, the 2019 season has encompassed over 121,000 races, with over 20,000 registered eSailors competing, with the aim of reaching the Finals Playoff to book a place in Bermuda.

Winter, Spring and Summer seasons brought together 100 Graded Digital Challenges lasting between one and five days. At the end of each season, Playoffs were held to decide who would qualify to the Finals Playoff. One hundred qualified from the Winter Season, 150 from Spring and 200 from Summer. Winners of each Digital Challenge automatically qualified with the remaining Finals Playoffs places decided via the eSailing World Championship ranking.

The September Finals Playoff decided who would qualify to the Bermuda Final. The top 1,000 eSailors competed over a two-week period in over 3,000 races. Those with the best scores on the leader board upon its conclusion qualified for a spot in the final and a chance at becoming the 2019 World Champion.

The top eight finalists will complete six preliminary races, in different boats and locations. A seventh race will be held in the live show, held in the Olympic skiff, the 49er, where San Francisco will be the virtual host.

Following this the top six competitors will advance to the double-points final which will be held in F50 boats in Sydney. Whoever comes out on top across the series will be crowned the 2019 Champion.

Alongside the honour of becoming the second eSailing World Champion, the winner will receive a $10,000 USD cheque, provided by Virtual Regatta.

The coveted eSailing World Championship Trophy will then be presented as part of the World Sailing Awards evening, which will take place later that evening.

The game can be played on desktop and via iOS and Android devices by following the links below:
Desktop – https://www.virtualregatta.com/en/index_vrinshore.php
iOS – https://itunes.apple.com/us/app/virtual-regatta-inshore/id1182301199?mt=8
Android – https://play.google.com/store/apps/details?id=com.virtualregatta.inshore&hl=en

The Caribbean Citizenship Summit of the Year!