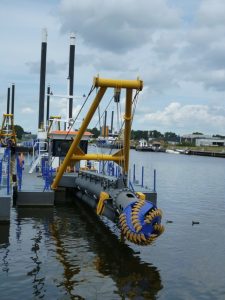 From contract to shipping in just under four months

Damen has just shipped a fully customised Cutter Suction Dredger (CSD) 350, to Brazil. The standard dredger was adapted to meet Brazilian Naval requirements and received additional options as per customer request. Damen has carried out the job very quickly; from contract signature to departure from the Port of Antwerp in just under four months.

The CSD350 is the first stationary dredger Damen has delivered to Brazil. Many countries – Brazil not being an exception – have their own regulations for outfitting vessels. Therefore the standard suction dredger from stock has been adapted accordingly. Mo 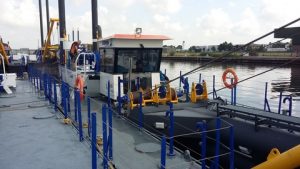 reover, the customer, Construtora Vale Verde, ordered a number of options. These include a non-return valve in the discharge pipe line, a wedge piece for shallow water dredging, Damen remote monitoring system as well as a navigation package for maximising safety on the job.

The CSD350 has been designed to dredge inland waters at a dredging depth between -1 m and -9 m water depth. It is fitted out with a 55 kW cutter head for breaking up compacted soils, and the in-board dredge pump is powered by a 447 kW diesel engine. For transport purposes, the dredger can be fully dismounted – quite practical considering that its first dredge job will be located some 500 km from its port of arrival, Vitoria. 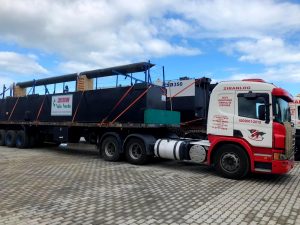 The dredger left Damen Dredging Equipment in Nijkerk, the Netherlands on five trucks – one for the main pontoon, one for both side pontoons and spuds together, one for the suction ladder and one for the separate container shipping, the operating cabin and various smaller items such as the navigation mast.

The dredger arrived in Brazil at the end of October, where it will be swiftly assembled by Damen, Vale Verde and local agent Endratech engineers, thus demonstrating clearly the benefits of Damen’s philosophy of standardisation. With products being built in series – often for stock – Damen is able to guarantee the fastest possible delivery times for proven solutions.

Markets in a free fall