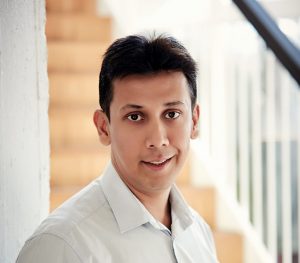 Prashant Widge, who has taken a leading part in award-winning initiatives to achieve Sustainability goals in responsible ship recycling, has been formally named as an Ambassador for the Executive MBA in Shipping and Logistics (the Blue MBA). He will enhance the already strong links between the MBA and the maritime industry in India, a country where investing in the sector is a government priority.

The Blue MBA’s ambassadors are key to furthering the status of the degree programme which is dedicated to developing the strategic capabilities of management in the maritime and associated fields. They serve as leaders and liaison contacts for past, present and potential future alumni of the programme.

A master mariner, Capt. Widge has been with A. P. Møller – Maersk since October 2012, and for the past four years  been  the Head of Responsible Ship Recycling . He was selected to lead a strategic and turnkey programme through engaging in the long term development of another responsible recycling location in Alang, India. He is also responsible for leading the ship recycling operations across the Group brands and global locations.

In that context, he manages the international political landscape with a multitude of stakeholders, the needs of global ship-owners, the expectations of local and global non-governmental organisations and the ways to  incentivise the Alang industry to upgrade its facilities and hinterland area.

In February 2019,  Capt. Widge’s work in the industry was ‘Highly Commended’ in the Business School Community and Society Impact category at the Association of MBAs Excellence Awards 2019. Only a couple of months later, in April 2019, he won ‘Special Recognition’ as Responsible Leader in the Graduate Responsible Leadership Award category at the The 2019 Graduate Business Forum Leadership Awards.

Before taking up his current role, Capt. Widge was Nautical Superintendent in Marine Standards at Maersk Line, where he was key responsible to  systematise the approach for handling emergencies at sea and providing guidance to ship masters by integrating safety of life, security, environmental, ship and cargo related considerations into decision-making.

He stepped  ashore in 2012, after what he describes as a “fulfilling” 11 years at sea – with a distinguished achievement of being  one of the youngest officers to take command of a gas carrier – to gain experience in port operations, vessel chartering, crewing, domestic and import and export logistics, finance verticals, budgeting process and forecasting. His sea service encompassed sailing ships for Shell  and Anglo Eastern Group.

Irene Rosberg, programme director for the Blue MBA, said: “We benefited greatly from Prashant’s enthusiastic participation in the Blue MBA Class of 2019, and now he is taking his loyalty an important step further by supporting our educational message in one of the top maritime nations.

“Together with our other Ambassadors, he will lend his valued and versatile energies to our ongoing pursuit of taking management education to the highest levels.”

The Blue MBA, which is under the aegis of Copenhagen Business School, the largest institution of its kind in northern Europe, and which has accreditations from top educational bodies, places an emphasis on leadership qualities including support for environmental sustainability. It has been referred to by industry leaders and top academics at its graduation ceremonies as “probably the best shipping MBA in the world.”

All participants already hold senior positions in their companies and organisations. Since 2001, the Blue MBA has graduated 274 students from more than 45 countries, and post-graduation they constitute an enviable network of knowledge-sharing and mutual support.  All alumni are deemed to be ambassadors for the programme, and at any one time up to a dozen of them are given specific regional or sectoral ambassadorial responsibility.

The highly regarded part-time programme consists of eight modules mainly in Copenhagen, with one each in London and Hamburg. Participants graduate after completing the modules and submitting the final master thesis, which is known as the Integrated Strategy Project.