Top Posts
Theodorides Estate: secluded Greek holidays in an enviable...
Sea20 network invites you to two important online...
TUAS MarISOT research on next generation VR training...
MarISOT
Don’t take chances where your health is concerned…
HELMEPA at the forefront of shipping decarbonization
Tufton and GoodFuels successfully complete biofuel voyage to...
MSC to cut up to 1.6 million tonnes...
Shipping Markets Checkpoint Season 3 , no. 1....
How Germany can provide answers to crucial questions,...
Infection rates dive in MC and region…
Ocean CO2 Removal, Business, Investment and What Law...
Georgina Allen: Landscape, Still Life, Abstract at Piers...
Hot Port news from GAC
Spain moves to the front in Leg 2...
Home HRArchaeology How Greeks can get back their Parthenon Marbles
ArchaeologyBooksEventsPaintings and SculpturePeople and Places

How Greeks can get back their Parthenon Marbles 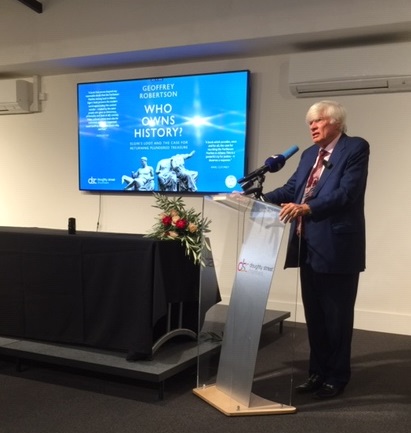 How Greeks can get back their Parthenon Marbles

Greece can have the Parthenon Marbles returned to the Acropolis Museum if Jeremy Corbyn becomes prime minister on 12th December, says Geoffrey Robertson QC today. Otherwise, the only way to force future Conservative Governments to send them back is to take legal action, Mr. Roberson said at the launch of his new book “Who Owns History? Elgin’s Loot and the Case for Returning Plundering Treasure”.

Mr. Robertson, a distinguished UK Lawyer and former UN appeal judge, in 2014 led a team that included Amal Clooney to advise the Samaras government. He has now written a book, using his legal qualifications to prove that Lord Elgin stole the marbles and to refute the British Museum’s claims that Elgin’s  behaviour was legitimate. “Elgin had the money to offer to buy them: he dared not do so because he knew the Ottoman government would not allow him, no matter how much he paid, to desecrate the temple of the Parthenon. So instead he lavishly bribed corrupt local commanders to turn a blind eye while his workmen ripped down these remarkable sculptures which had stayed there for over 2,000 years and would have remained for another 25 years until Greece obtained independence”. 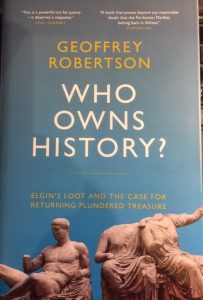 The book debunks the British Museum’s claim, which it currently makes to its visitors in a large sign outside the gallery displaying the marbles, that Elgin’s taking of them was authorised by a Turkish official. “This is legal and historical nonsense – this particular official could not, and did not, authorise the despoliation of the Parthenon and it is sad that the British Museum should misinform its visitors in its efforts to defend Elgin, instead of telling the truth about his heist.

Mr. Robertson pointed out that the main difference in cultural policy between the Labour and Conservative parties is that Mr. Corbyn has said that he favours return of the marbles and other cultural property looted by the British army in wars of colonialism, while Conservative spokesmen have refused point blank to return any stolen cultural property even if plundered in the course of what would now be regarded as a war crime. So if the Greeks want the marbles back soon, they should urge their English friends to vote for Labour”. 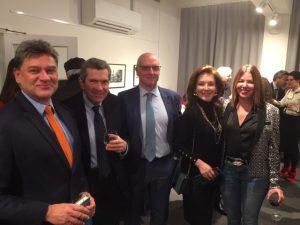 Otherwise, Mr. Robertson said, the only way for Greece to obtain possession of the stolen marbles is to procure an opinion from the International Court of Justice to the effect that there is an international law rule that wrongly taken cultural property should be returned. Such a rule would obviously include the marbles in the British Museum. To obtain an ICJ opinion would require Greece to lobby for the support of a majority of states in the General Assembly, which has the power to refer the case to the ICJ. “I think the support is already there” said m. Robertson, referring to the vote last December when 105 nations supported a Greek motion in favour of restitution in principle. “Those nations could vote to refer the matter to the ICJ and if the court came to the view that international law required the reuniting of the wrongfully taken sculptures with the others already in the New Acropolis Museum, then I think Britain would have to comply”. 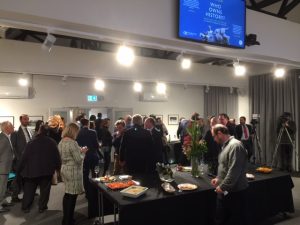 from the drinks and dips reception

Nearly one hundred guests attended including many from the international media. Diplomats, Authors, Historians and many others interested on this very special issue where there from all over Planet Ocean. The Greek Shipping fraternity was there in full force headed by the president of the HESGB (Hellenic Engineers Society of Great Britain) Dimitris N. Monioudis. The president of the Oinoussian Benevolent Fund John M. Hadjipateras and his daughter Kalliopi as well as the president of the Chios Society in the United Kingdom Mrs. Anna Frangeskides and her husband wee there too.

The Book signed by the author was sold out before even the drinks and dips reception ended; excellent!

Finally, many congratulations to GPA, The Greek Press Association in the United Kingdom  for its full support to all intents and purposes in the the launching of this important new book !!!! 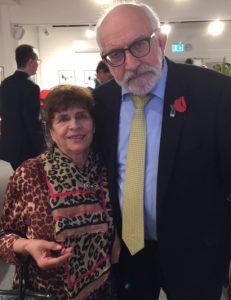 Will await now to see what happens next! Watch this space!

Pinch me, the BDI is up nine points amid geopolitical mess