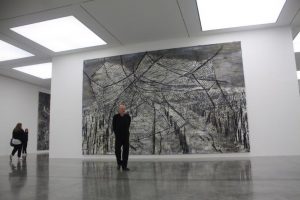 Anselm Kiefer and The Veneziano Amplitude.

Bleak scenes are infused with the dried-out devastation of what might be the beginning of the end of the world. In a new exhibition in London of his epic-scale works, Anselm Kiefer presents scary, scarred canvases, not as an ecological challenge but as a way of reaching and reconciling philosophical conclusions about existence.

In this paradoxical perplexity, we might be on the eve of destruction, but nature seeks a chance to self-generate from disaster inflicted upon it. 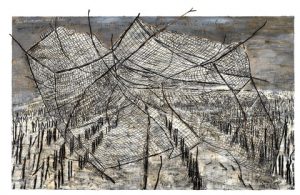 Commanding the whole of the huge White Cube gallery in Bermondsey – which lies a short distance from the sinuous rail tracks feeding into and out of London Bridge station, and within sight of the monumental 21st century “vertical city” The Shard – the ambitiously-minded contemporary artist brings to bear his gigantic conceptions entwining Greek and Nordic mythology, the mystical seven seals associated with the Aegean island of Patmos, the Runic alphabet of ancient European tribes, and the mathematical endeavour known as string theory.

The barren landscapes he confronts us with throughout Superstrings, Runes, The Norns, Gordian Knot are visions of perdition. There are phoenix-like glimmers among the ashes, but you must look hard to find the dashes of the paintbrush that have created them. 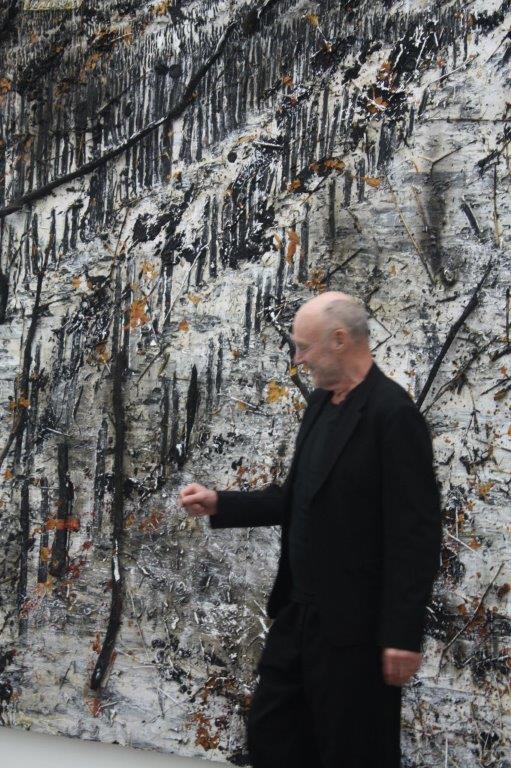 The hard-to-grasp concepts that motivate the artist are clarified as much as can be done in short compass by a perceptive printed text given to visitors who enter the gallery.

The overarching message is that he is seeking to show that the spiritual and scientific, the celestial and terrestrial, and the past and the present are interlinked.

Seeing this extraordinary, free-entry solo show is an overwhelming and hugely worthwhile experience, even if one emerges feeling shattered by being dwarfed by the towering canvases, and a long corridor of 30 tall vitrines in steel and glass frames. The venue is one of the few that could accommodate the colossal undertaking. Incorporating 5,388 sq m of interior space, White Cube Bermondsey opened in 2011 in a renovated former 1970s warehouse.

Kiefer has in his words “tried to bring together theories of seemingly extraneous principles from different cultures and histories” so that complex scientific theory connects with subject matter from ancient mythology. In so doing, he makes visual the idea that “everything is connected: the missing rune letters, string theory, the Norns, the Gordian knot.” He says that Einstein’s initial attempts to devise a model based on laws of nature for the entire universe came up against the contradictory quantum theory which explains the nature of energy and matter on the microscopic scale – one world has rules, the other hasn’t.

String theory – also known as Superstring theory and the theory of everything – tries to resolve the contradiction by explaining all the particles and fundamental forces of nature in one theory. by modelling them as vibrations of tiny supersymmetric strings. The mathematical model attempts to articulate the known fundamental interactions of the universe and forms of matter.

Speaking of “forces of nature,” on this showing, Anselm Kiefer has again proved to be one himself in terms of his unflagging energy and commitment to his mantra.

The philosophical challenges are raised everywhere in the sinister, fearful and tragic landscapes that look like war zones, which have become devoid of human participants – and perhaps of sound, barring an occasional suggestion of crackling flames amid the overlaid vegetation – in this age of anxiety.

Superimposed on the ash-encrusted surfaces, branches, twigs and straw outcrop beyond the borders of many of the pieces affirming that the artist will not be fenced in, neither in his physical artwork nor in his exploration of atom strings. An uncontrollable force seems to be at work. 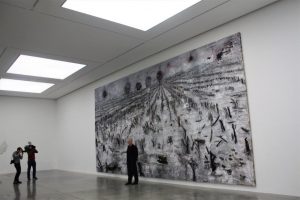 The gallery suggests “this may embrace a paradoxical circularity of both a beginning and an end, form and ‘un-form’, decay and rebirth, thereby offering the potential for growth and expansion beyond earthbound limits.” He is unconcerned that some of the attached pieces of wood and other perishable material can fall off, but even this “has a meaning.”

In Die Sieben Siegel, die geheime Offenbarung des Johannes and other works, wooden posts such as might be dug in rows in a vineyard or orchard to train the plants, are damaged and scorched but seem to march relentlessly across vast fields like lines of soldiers. The title is taken from Book of Revelation, the final section of the New Testament, sometimes known as the Revelation to John or the Apocalypse of John, 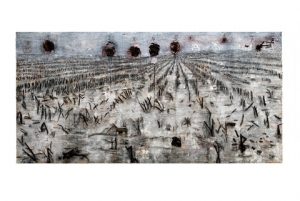 The Seven Seals secure the book that St John on Patmos saw in an apocalyptic vision. In a letter to the Seven Churches of Asia he revealed a series of prophetic visions culminating in the Second Coming of Jesus.

Immense paintings each measuring over 4 sq m depict the arcs of an amphitheatre or parliament – or maybe a cemetery with numbered vaults, sitting within a bleak landscape. Die Lebenden und die Toten (2019) shows a panopticon – which is a cruel form of exerting power through surveillance – a central observation tower within a circle of prison cells. This disciplinary structure is set in a devastated, blackened wasteland that in another painting of the same name is itself threatened by a cascading mass of blackened straw. 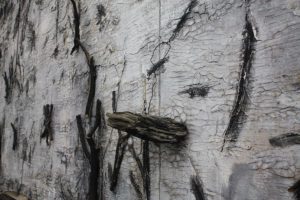 In further substantial works characterised by eerie landscapes the artist elaborates on his references to string theory. Edward Witten: Quantized Gravity is named after a New Jersey researcher in mathematical physics and is dominated by a huge gridded web. This union of imagery articulates “the discrepancy or tension between our idea of ​​the three-dimensional world, the perspective that runs to one point, and the resulting strings, which no longer have a centre.”

The web is again ominously dominating in The Veneziano Amplitude. The Veneziano amplitude refers to work in 1968 by the Italian theoretical physicist Gabriele Veneziano on the interaction of light with matter, heralding the advent of string theory. 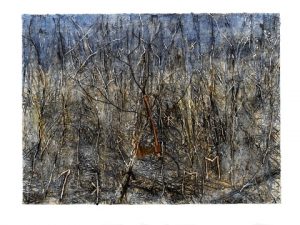 The monumental Ramanujan Summation − 1/12 pays tribute to Srinivasa Ramanujan (1887-1920), an Indian mathematician who had barely any formal training in pure mathematics but made substantial contributions to mathematical analysis including solutions to problems hitherto considered unsolvable. Wielding emulsion, oil, acrylic, shellac and wood the artist presents pallid fields under a brooding sky, lit by stars and with hand-drawn astrological notations.

When we see his depictions of charred landscapes, we are tempted to ask: is this a reflection of the social and political crises disrupting the post-war order?  In fact, the touchstone is timelessness. The apocalypse is always present, moving between nothingness and something, he says. “I know from the beginning this is already the negation of something and in the same moment know it is nothing.” The apparently fantastical theme is relentlessly exploited; and looked at in this way, is coherent. 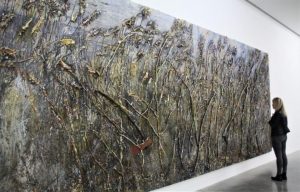 Another in the series Der Gordische Knoten.

Still, he leaves it to the viewer to draw out further meaning, as when runes formed by small pieces of wood are scattered throughout the canvases in the series Der Gordische Knoten (the Gordian Knot). The title is the waypoint towards the severing of the tangled Gordian knot, proverbially referring to any problem that can be solved only by bold action.

This proposition is based on the story of how in 333 BC Alexander the Great drew his sword to slash an intractable knot binding the chariot of Gordius, the founder of the city of Gordium, capital of Phrygia. Representing Alexander’s resolution of the knot, attached to each painting in this series is a long-handled axe, with rusted blade and branches grafted onto the handle. 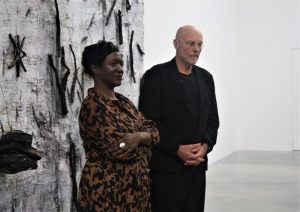 Standing in front of these canvases, one gradually discerns the runic symbols almost camouflaged among the stems of darkened wheat and tangled branches.

Carved into stone or wood, runes were used by ancient European tribes 2,000 years ago before the adoption of the Latin alphabet to name places and objects, attract luck, provide protection, and forecast the course of events. Runic alphabets were used to write some Germanic languages, and for Kiefer these letters join string theory to mythology and Nordic language, serving as “an ancient means for mystics to interpret the secrets of the world.”

Kiefer selects runes that signify the self; a partnership or gift; property, food or livestock; separation or withdrawal; life energy; compulsion or necessity; receiving messages; movement or progress; communication; and joy or light. 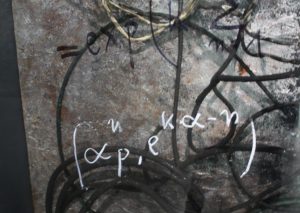 Detail from a vitrine.

According to the site White-magic-help.net, “The original meaning of the word rune is ‘secret, or something hidden’. Some indications are that the early runes were not used so much for writing, but rather as magical signs.”

Along the gallery’s corridor are 30 vitrines in steel and glass frames, comprising a single installation. Each vitrine, over 4 m high, is filled with densely worked, crumbling panels and unruly masses of industrial tubing – “I use all the materials I can find,” says the artist. Marked across the glass are hand-written phrases, equations relating to string theory and the names of the three chief Norns (the female controllers of human destiny in Norse mythology): Urd, Verdandi and Skuld. It looks like they are unfinished maths tasks, impossible to finish as they are too complicated. 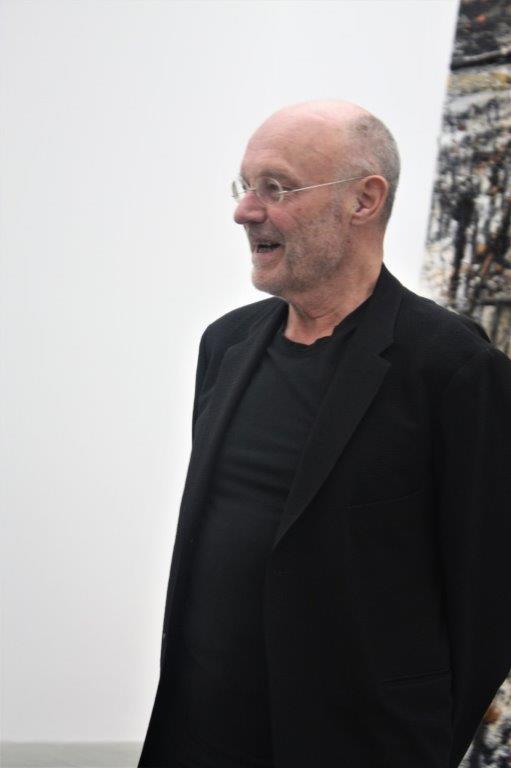 The mass of piping is straining against the limits of the glass cases. One visitor speculated: “Is this the reason they are put behind the glass and look all the same… like a children’s puzzle: definitely something is keeping him [the artist] puzzled…”

Anselm Kiefer sees it this way: “Crochet gets tangled and it is the end of the world when you take out one thread [for] it could collapse. For me this is connected with string theory.”

Susannah Hyman, head of exhibitions at White Cube, extolled Anselm Kiefer’s diverse body of work in painting, sculpture and installation that she said has made him one of the most important European artists of the past four decades.

Anselm Kiefer was born in the Black Forest town of Donaueschingen in Germany in 1945 and has lived and worked in France since 1993.He delivers immense tableaux and controversial projects with great conviction. In 2007 he became the first artist to be commissioned to install a permanent work at the Louvre since Georges Braque some 50 years earlier. In 2009 he created an opera, Am Anfang, to mark the 20th anniversary of the Opéra National de Paris.

He likes to quote Goethe, “we still all want to find out, what holds the world together at its core.”