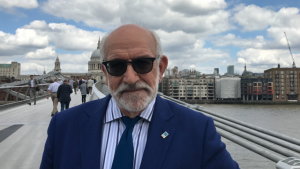 The BDI (Baltic Dry Index) lost 44  points earlier on today and now stands at 1,260. With the geopolitical issues having no end, things can get sour all over. John Faraclas’ brief midweek recap:

The Capes’ BCI loss was a triple digit one with the 2,500 point threshold lost; at 2,435 – minus 108 points the Capes might become a liability yet again. Let’s hope not…

So what next for the Dry market? Are just difficult days ahead or something even worse…

The Geopolitics derailed… More on the first update. 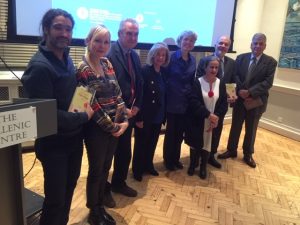 On another tone and note the Antonis Samarakis event in London’s Hellenic Centre was more than a success, a very touching success… At a full house at the Friends’ Room four speakers, the Greek Ambassador and two ultra-eloquent actors produced the best for one of Greece’s most iconic writer and philosopher in his own right: Antonis Samarakis. The event coincided with the centennial from his birth (1919).

Sissy Papathanassiou, director of Letters at the Hellenic Ministry of  Culture and Sports introduces the  event; then come Dr. Vassilis Sabatakakis, president of the European Society of Modern Greek studies; a well construed intro.

Then two short speeches followed, one by the very eloquent Prof. Dimitris Tziovas from the University of Birmingham on “Samarakis and Greek 1960s”; the other by Prof. Gonda van Steen from King’s College London, Koraes Chair of Modern Greek and Byzantine History, Language and Literature and Director, Centre for Hellenic Studies. Prof van Steen’s points worth to remember given the style and pathos she delivers her speeches and statements!

The last speaker was H.E. the Greek Ambassador Dimitris Caramitsos-Tziras with yet again another down to earth speech following the one at the Oinoussian Ball last Saturday; the finale come with a video projection created from archived images of the exhibition “Antonis Samarakis, forever young” narrated by Sissy Papathanassiou! 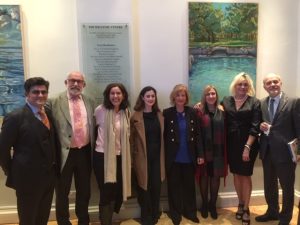 Over 75 attended given that it was a midweek event; amongst them  former banker turned artist/painter John Makris with his wife, art director Panagiotis Neufelt, the newly appointed Educational Counsellor at the Greek Embassy Vanessa Tsilogianni, the chairman of the Hellenic Centre Sophie Kydoniefs, the director of the Hellenic Centre Agatha Kalisperas, Maria Papastergiou Davies, Dimitra K. Moutzouris, The Press Counsellor  from the Greek Embassy Elena Soupiana, Alkis Delantonis also from the Embassy’s Press office, Konstantinos Apostolopoulos from the political section of the Greek Embassy, Dr. Dina Kafiris and many others… A nice drinks and dips reception followed at the Hellenic Centre’s Bar with great discussions – overheard some excellent points for the late Antonis Samarakis

The event was under the auspices  of the Greek Ministry of Culture and Sports as well as the support of the Greek Embassy in London  and the European  Society of Modern Greek Studies. 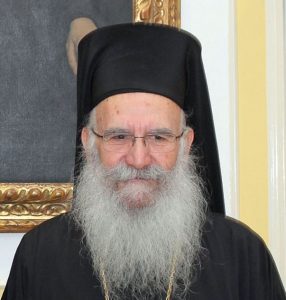 On a sad note, Archbishop Gregorios of Thyateira and Great Britain who was on a self-retirement due to poor health, passed away in the early hours of this morning. He will always be remembered as a sui generis high priest. His late Eminence was The Real Down to Earth Christian speaking his mind; Blessed. Let his journey to the Sea of Eternity be an easy one!

Have a nice and remain on guard from action emanating from Pirates, Terrorists, Criminals and Business Hooligans whatsoever wherever you are on Planet Ocean!