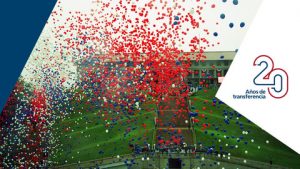 Today, the Panama Canal celebrates two decades under Panamanian administration. While the waterway was already an important trade route and engineering marvel, its transfer to the Panamanian people at noon on December 31, 1999, set in motion a redefining period not only for the Panama Canal, but also Panama itself.

Over the next 20 years, the Panama Canal transformed from a profit-neutral utility to a competitive, innovative business. With the country’s support, the waterway modernized and optimized service, upholding its commitment to enabling global trade and local growth. Meanwhile, its world-class workforce drove positive change across the industry and strengthened the country’s rising role as a global logistics hub.

The Panama Canal’s achievements over the past twenty years have come to embody its Panamanian leadership, marked by its ability to take on seemingly impossible challenges and exceed expectations. While the industry continues to face an increasingly complex operating landscape, the waterway celebrates its transformation to-date and remains committed to tackling challenges with ingenuity, courage and imagination, just as it did 20 years ago.

To mark its 20th anniversary under Panamanian leadership, the waterway proudly looks back at a few key achievements from the past 20 years: