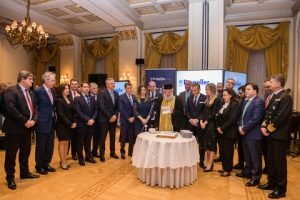 From the blessing of the traditional Greek New Year cake (Vasilopita)

Once again, the International Propeller Club of the United States, Port of Piraeus, celebrated New Year in the Greek tradition, with the cutting of the traditional Greek New Year cake at the Grande Bretagne Hotel on Monday 20th January 2020.

Costis J. Frangoulis, President of the Propeller Club, extended his New Year wishes for the maritime industry, the men and women at sea, and for the continuation of the excellent relationships between Greece and the United States in the maritime arena. This, he said, would make 2020 another great year for the Propeller Club.

Leading Greek businessman, Andreas A. Potamianos, was presented with a Recognition Award for his significant contributions to the Propeller Club over the years.

As in previous years, the Propeller Club announced its support through scholarships, as well as through donations to philanthropic foundations in Greece, this year with a 50% increase in comparison to 2019.

The traditional Greek New Year cake – the ‘Vasilopita’, was blessed by Archpriest Dimitrios Nikou, representing the Archbishop of Athens.

The theme for the evening was NEXT – Working for the future.

A fitting theme for the New Year.

A theme which underlines the commitment and dedication of the International Propeller Club of the United States, Port of Piraeus, to contribute to the future of the maritime industry. To the future of Greece, the future of our children.

Indeed, children provided the spirited entertainment for the evening with traditional Greek dancing by students from Pierce College, and musical performances by Deree College and the American Community School (ASC), Athens.

This year’s donations and scholarships which were 20 in total, granted to the following institutions:

Mrs. Danica May Mojica – Honor Student of the American College of Greece

About The Propeller Club

The idea was conceived in New York, in 1922, by a group of professionals engaged in the merchant marine industry who gathered frequently at luncheons to discuss mutual issues and the future of shipping.

These meetings gradually developed into the Propeller Club of the United States, which aims at the promotion and furtherance of the American merchant marine and international shipping in general, as a symbol of mankind’s efforts to ring for a better world through commerce and industry.

“Propeller” refers to the propulsion of ships, and is symbolic of the driving force required to achieve the Club’s objectives. Today there is a Propeller Club in almost every sea and inland port in the United States, as well as in 33 cities throughout the world. The Propeller Club’s world headquarters is located in Fairfax, Virginia.

Propeller Club, Port of Piraeus was founded in 1935 as a non-profit charity Association. The Club cooperates closely with the Union of Greek Shipowners, the International Chamber of Shipping, the Hellenic Short-Sea Shipowners Association, the Hellenic American Chamber etc. to promote Maritime Relations, Commerce, Goodwill and Cultural relations between citizens of Greece, the U.S. and all other countries represented by their members. The net income of the Club is fully distributed with fairness and transparency to charities and scholarships to students, primarily from naval families.