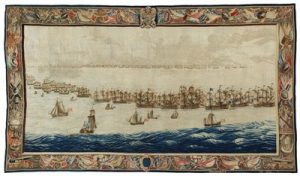 AMSTERDAM, Jan. 23, 2020 /PRNewswire/ – The National Maritime Museum in Amsterdam (Het Scheepvaartmuseum) has purchased two rare, royally commissioned tapestries designed by Willem van de Velde the Elder (1611-1693) in England. The tapestries mark the significance of shared Anglo-Dutch heritage. The acquisition is the largest in the history of the museum. The artworks arrived at the museum earlier this week and will be on public display from 2 October 2020.

The National Maritime Museum in Amsterdam considered purchasing just one tapestry. An additional contribution from a Dutch art fund and close consultation with colleagues from several museums in the UK, enabled the museum to keep both tapestries together. The biggest acquisition ever was made possible with the support of several Dutch sponsors.

The tapestries are part of a series of six which depict various scenes from the Battle of Solebay in 1672. A first set was commissioned by King Charles II shortly after the battle. It is still in the Royal Collections. One tapestry is on permanent loan to the National Maritime Museum in Greenwich. Thirteen years later Charles’s brother, King James II, commissioned a second set depicting the battle which was broken up for sale in 1914. Four tapestries from this set are currently in American museum collections, but not on public display. The two tapestries acquired by the National Maritime Museum in Amsterdam, were the last ones that will ever appear on the market. They have been restored with great care in the UK.

The tapestries will go on display for the first time during a large Van de Velde exhibition in the National Maritime Museum in Amsterdam from 2 October 2020 to 5 April 2021. Given its size and scope, this retrospective exhibition will be a world first. After the exhibition the tapestries will remain on public display in the museum permanently.

About the retrospective exhibition: www.hetscheepvaartmuseum.com/vandevelde

About Willem Van de Velde the Elder and the Battle of Solebay: www.hetscheepvaartmuseum.com/about-us/press/2074/national-maritime-museum-amsterdam-makes-spectacular-art-acquisition-in-the-UK

The commercial aspects that matter to the Shipping industry