All responsible vis-à-vis the clashes over new Migrant camps in Aegean islands of Lesvos, Chios, Samos, Leros and Kos should resign! 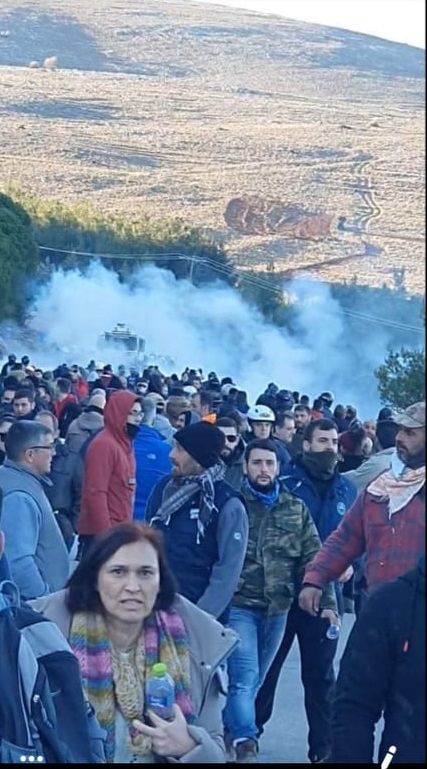 From the demo and clashes on Chios

All responsible vis-à-vis the clashes over new Migrant camps in Aegean islands of Lesvos, Chios, Samos, Leros and Kos should resign!

This is the only antidote against harming the Aegean Greek islanders caught up in the MIGRANTS despicable situation for which the last four Greek governments, under duress from abroad – Europe and NATO and Turkey in particular – are totally responsible: END of the story!

The latest dreadful development – now in full progress 48 hours with Greek Police Special Forces landing on the islands without any plan whatsoever, even to protect their own personnel, tells it all.

After a decade Greek citizens all over the Aegean islands had enough as they finally understood that their humanitarian behaviour to nestle the MIGRANTS from war-torn Syria in their homelands in open or closed camps led to the multiplication of numbers of thousands of MIGRANTS coming from as far as Afghanistan and sub-Sahara with the assistance of Turkish PM Erdogan who on purpose blackmails Europe. Enough is enough!!

The social cohesion breaks… no matter if they are on the islands or in Mainland Greece.  A country of 11 (eleven) million cannot sustain this; Germany though with its 80 (eighty) million plus, can so do!!!

Just recently, the UN High Commissioner for Refugees Filippo Grandi called for an end to the shocking and shameful conditions at the Greek camps. He should better take this back and apologise, then resign, as the stumbling block is Turkey which on purpose allows thousands to cross over!!!!

He, and UN Secretary-General António Guteres should proceed with a naval blockade of the entire Anatolian coast of Turkey – conversely the entire Med, with a mandate and rules of engagement. The president of the European Commission too, Ms Ursula von der Leyen, should act forthwith – she was Germany’s defence minister and we suppose she knows a lot about how could be halted the Turkish despicable and blackmailing actions in sending over MIGRANTS from all over the place. A country like Greece, fatally wounded from a 10 (ten) year financial catastrophe cannot cope with this situation even with planning and FULL support in means and funds on a TEMPORARY basis only and have in its sensitive zone – its islands so many MIGRANTS!!!! Are the Europeans afraid of Turkey, eh???

The Tsipras regime in Greece couldn’t react at all hence the situation got out of hand. His respective ministers on the issue were totally out of any context with the matter.

The current government must get its act together and speak out. When one chooses a minister for a very sensitive position such as Immigration and Asylum – given the global situation and the periphery one, he or she MUST derive from the top echelon.  Equally, when a minister accepts such an appointment, he or she must be ultra-capable in the field, and if not, decline to accept same.

On top of everything else, there wasn’t and still isn’t any Risk Assessment Plan, nor any Crisis and Strategic Communications plan in force.

Excuses as we see and hear same are only for morons.

We have numerous times over the last nine years warned of these developments and of more to come and we listed the MIGRANTS issue as the top issue all over Planet Ocean in all our daily Reports and Recaps. We have besides our written reports and photos from all over Greece, live reports and interviews so now we bounce back and ridicule all those involved.  Hands off the Greek islanders and Greece too as the MIGRANTS are unchecked all over Greece. Not to mention the role of the NGOs…

We have been fortunate to have live the Governor of the North Aegean Greek Islands Prof Costas Mountzouris during the World Travel Market in London to give us the real view on what is unfortunately happening and what will happen.

We challenge any Greek minister as well as any European one live on TV on the MIGRANTS Issue on a A1 TV channel live.

Lastly, may we remind you that when the prisons in England and Wales in the early-mid 90’s were overcrowded, floating prisons arrived from the USA in Dorset. A country like Greece with its shipping heritage and a bloc like the European Union should have hired passengerships and old cruiseships with their favourable cabin lay-out to temporarily house these people who come to safety from their war-torn countries or despotic inhumane regimes.

Dear Mr Faraklas
You speak the only truth.
The Brussels’ krauts and their cronies intend to wreck the national cohesion of Greece.
They messed with their wrong people…